Who's making the team?

There are two battles going on in spring training; one for the fifth starter spot and whoever will make the bullpen. After just the second week of games, the results of these battles are already becoming much clearer. We've lost three players in the last few days as Jose Ramirez, Francisco Rondon, and Nik Turley have been cut from major league camp and were optioned to the minors. None of them were playing due to injury and were unlikely to make the team, but it would have been nice to watch them pitch nonetheless.

Here are the chances for those that are left: 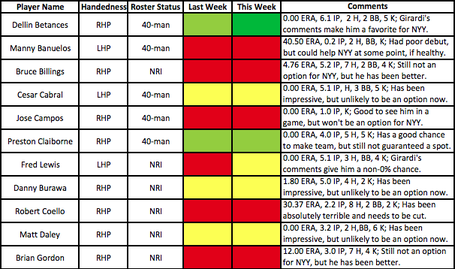 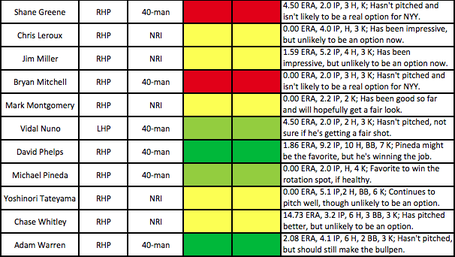 The competition for the fifth starter spot has devolved into a very simple scenario. Either Michael Pineda proves that he's healthy or David Phelps has the job. Phelps has been great while Adam Warren was never really going to win and Vidal Nuno hasn't really pitched. Pineda was impressive in his first game back, so hopefully he can build on that and become a realistic option.

As for the bullpen, aside from David Robertson, Matt Thornton, and Shawn Kelley, there are four open spots. While it's a wide open race, we know that only a few of them are really being seriously considered. If everything plays out as it should and there are no injuries, Adam Warren, David Phelps, Vidal Nuno, Mark Montgomery, Preston Claiborne, and Dellin Betances are the six pitchers with the best chances to be in the MLB bullpen. There are also a few pitchers who could make an impression in order to get a callup later in the season.

I'm being bold in my claim that Dellin Betances has a spot on the team. His performance has made him a favorite, but it's Joe Girardi's comments about him that set him apart from all the rest. If spring training ended today, Betances would be on the Yankees. As of right now, I think he has a spot won, but things could change if he starts to slip or someone else moves past him on the depth chart.

The only other pitcher whose chances changed this week was Fred Lewis. Girardi had good things to say about him, so, though it's still very unlikely he will make the team, he has at least put himself on the depth chart. By the end of spring training, he could become the lefty reliever waiting in the wings if Thornton gets hurt.