The Yankees just can't seem to find a way to beat the Rockies. Maybe tomorrow.

Tonight Ivan Nova and Chad Bettis squared off for the second time in a week, and the Yankees did not fare much better during this second chance. Not only did Nova have a poor night, but the defense was sloppy, and the offense was mediocre. This was not a good way to start this homestand.

Coming into this game, Nova had given up 21 runs over his last five starts. At this point is seems like Nova should be fighting to keep his spot in the Yankees' rotation, and this outing did not do him any favors. Nova only threw two pitches before he got into trouble, surrendering a home run to Charlie Blackmon. It pretty much all went downhill from there. Next Nova gave up three singles in a row to make it 2-0. Carlos Beltran made a fielding error that allowed Carlos Gonzalez to advance to second base, then Daniel Descalso hit a bunt single to load the bases. With one out, Mark Reynolds grounded into a force out that allowed another run to score.

In the second inning, Blackmon reached on a fielding error by Rob Refsnyder after the ball bounced off of his chest and then rolled away from him. DJ LaMahieu then singled to left, and Nolan Arendao hit a sac fly. Blackmon hit another bomb off Nova in the fourth inning. Although the bullpen was up early in the game, Nova went back out for the fifth inning. Gonzalez hit a lead-off double over Beltran's head, then Nova walked Trevor Story and that was the end of his day. Nick Goody took over with two on and zero outs and was unable to get out of the jam without giving up an RBI double to left. Nova ended his night having allowed five earned runs on eight hits. He also walked two batters and notched just one strikeout. 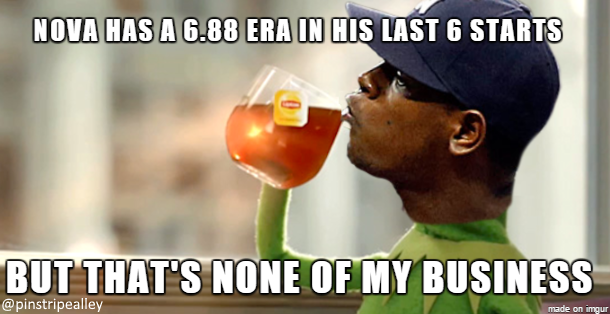 Goody gave up a two-run shot to Arenado in the sixth, then was lifted in favor of Richard Bleier. The rest of the Yankees' relievers were able to shut down the Rockies. Bleier, Kirby Yates and Anthony Swarzak combined to pitch three and two-thirds scoreless innings, and Swarzak even struck out the side to finish the game.

Offensively, the Yankees did manage to put together ten hits tonight, but they went 0-for-10 with runners in scoring position. They put one run on the board in the first inning after Brett Gardner and Beltran hit back-to-back singles. Alex Rodriguez grounded into a double play to bring Gardner home. The Yankees also tacked on another run in the second inning. Didi Gregorius doubled to right, then with two outs, Aaron Hicks reached on a fielding error that allowed Gregorius to score.

In the fifth inning, Gardner and Beltran were at first and third when Alex Rodriguez hit a sac fly to center. Gardner tagged up and had the mindfulness to look over at Beltran before hustling home. For some reason Beltran thought it would be a good idea to tag up and take second, and was thrown out at second to end the inning. The final run scored in the sixth inning after Starlin Castro singled, and Gregorius hit a triple to deep center. The Yankees had another good chance to do some damage during the following inning after Refsnyder hit a lead-off double and Gardner worked a walk. However, Beltran, A-Rod, and Brian McCann left the runners stranded.

The Yankees still have a chance to split this series with the Rockies tomorrow. CC Sabathia will take the mound against Jon Gray at 1:05 EST.