Share All sharing options for: Yankees rumors: Kendrys Morales to sign soon; team asked him for time to evaluate injuries

The draft pick compensation tied to Kendrys Morales will no longer exist once the 2014 MLB Draft kicks off in a little over an hour. The slugging first baseman will then become much more valuable and desirable to teams in need of an offensive boost with a few weeks to go before trade season heats up. The Yankees have been rumored to be interested in Morales on multiple occasions, but it's difficult to see where he would fit into the lineup with Mark Teixeira entrenched at first base and Joe Girardi claiming that Carlos Beltran will serve primarily as the DH while he tries to avoid surgery on a bone spur in his elbow. 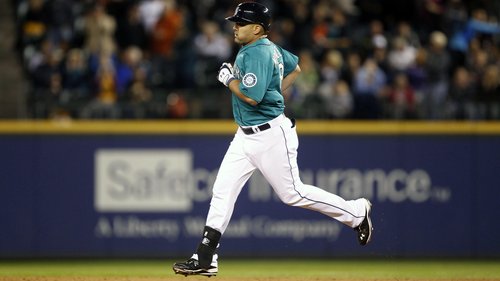 Injuries to Mark Teixeira and Carlos Beltran could make signing Morales make sense for the Yankees.

According to Jon Heyman, the Yankees asked Morales' agent Scott Boras to "wait a few days" to sign until they could evaluate the injury statuses of both Teixeira and Beltran, but Boras, expectedly, was not willing to do that. An injury to one of the two sluggers would obviously open up playing time for a 1B/DH type like Morales, but he isn't going to unseat either Teixeira or Beltran if they are healthy. Other teams who do not feel the need to wait and see on Morales are likely to scoop up the free agent in the next day or so. It wouldn't be particularly surprising to see him signed tonight or tomorrow, but he would likely need a bit of time to get ready after sitting out the season to this point along the same lines as Stephen Drew.

Offensively, the Yankees have really struggled to put runs on the board. Adding a prolific bat like Morales' to that mix could help boost the output at the plate. However, his inability to play any position other than first base or DH severely limits the impact he can have on the Yankees. If Teixeira is healthy, he is going to be the first baseman. His wrist pain could very well flare up multiple times over the rest of the season, but the team can surely not promise any regular playing time to Morales at first base as long as Teixeira isn't on the disabled list. Carlos Beltran may find himself unable to play through the pain of the bone spur in his elbow through the help of cortisone for the remainder of the season without needing to undergo surgery. Still, his three-year deal is going to keep the Yankees from committing to a player to serve as the DH as long as Beltran and others need to occupy the spot regularly.

It seems like another team would be a better fit for Morales at this point, which means his chances of joining the Yankees are quite slim. It's possible that the Steinbrenners will panic and sign him anyway, but teams like the Brewers, Mariners, and Rangers are probably much better bets. Either way, Morales' eventual destination should be known sooner than later.