Yankees reportedly still not interested in Stephen Drew for some reason

The Yankees currently project to have one of the worst infields in baseball with question marks at every position. Derek Jeter and Mark Teixeira are coming off major injuries that ruined their 2013 seasons, Kelly Johnson has very little experience at third base, Brian Roberts is as fragile as Aunt Tessie's urn sitting precariously on a windowsill, Brendan Ryan can't hit, and Eduardo Nunez can't do anything. After dropping about half a billion dollars during the off-season and blowing by Plan 189, one would think that the Yankees wouldn't hesitate to make an improvement to their infield, even if it would only cost a low second round pick. Pitchers and catchers have reported, yet somehow the second-best shortstop on the 2013-14 free agent market is still available in Stephen Drew.

Unfortunately, per ESPN's Andrew Marchand, the Yankees continue to have no interest in signing the shortstop, whose defensive success would likely translate to second or third:

There has been some Internet chatter that in light of the Derek Jeter retirement news, the Yankees may go after Stephen Drew. The idea is that Drew could play second and third base this year and then become Jeter's replacement in 2015. As a hypothesis goes, it is not terrible. However, a source told ESPN New York the Yankees still aren't interested in Drew. It didn't sound as if they were going to change their minds, either.

Lovely. It is puzzling that the Yankees just have no inclination whatsoever to improve their infield through Drew when all he would likely need at this point is a two-year deal with an opt-out after year one. Yes, he has his flaws, but he's arguably a better pure hitter than anyone in the infield right now except for maybe Teixeira. What is the problem? Worry about the 2015 free agent market when the 2015 free agent market comes. If the Yankees are waiting for Hanley Ramirez or J.J. Hardy to reach free agency, it could very well be a wild goose chase since both have discussed extensions with their respective teams.

Here with a special report and commentary on this development is PSA head honcho Tanya Bondurant. Thoughts? 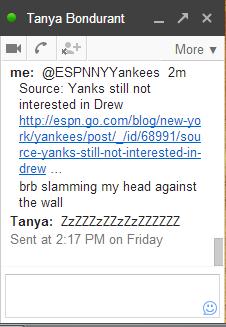