The Yankees' 40-man roster is currently filled after the signing of Jacoby Ellsbury was made official. Unfortunately, they still have plenty of work to do. They need to make room for Carlos Beltran. They also still need to sign someone to play second base, third base, and probably add another starting pitcher. And that's if Alex Rodriguez doesn't end up suspended. To bring in these players, there will need to be a few cuts. 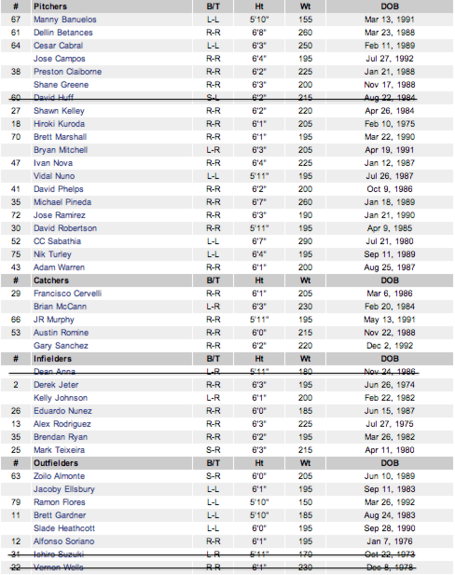 As much as the Yankees like David Huff because he's left-handed, the pitcher has had a lousy career, so it's possible he makes it through waivers. If not, they won't really miss much, since they already have Vidal Nuno and Cesar Cabral as better options out of the bullpen.

Though they just traded for Dean Anna, he's a career minor leaguer and even if they have finally given up on Eduardo Nunez, they are likely to keep him in Triple-A just in case. Kelly Johnson, Brendan Ryan, and whoever they get to play the corner infield positions, will likely be enough help to sacrifice Anna to the waiver wire.

The Yankees really need to get rid of both Vernon Wells and Ichiro Suzuki. While Ichiro could be a decent backup outfielder, Wells is simply wasted space. Wells is sure to go, but Ichiro might be given a free pass just based on who he is. He still needs to go, though.

Other moves could be made, especially in regards to the bullpen, and trades could happen, but these players need to be designated for assignment to free up mandatory spots right now.