Share All sharing options for: Yankees rumors: Focus shifting back to Carlos Beltran & Shin-Soo Choo while trailing for Cano

With the Yankees currently trailing the Mariners' offer to Robinson Cano by $50 million, the team's focus has shifted back toward free agent outfielders Carlos Beltran and Shin-Soo Choo, according to CBS Sports' Jon Heyman. The Yankees have been firm in their reluctance to offer Cano more than $170 million over seven years despite the nine-year deal worth $225 million that Cano is said to have on the table from Seattle. 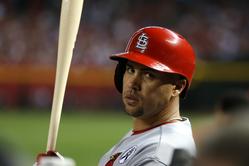 Beltran was the Yankees' top choice for outfielder before they signed Jacoby Ellsbury earlier this week because the veteran would command far fewer years. Once a mystery team, speculated to be the Royals, was said to offer him a three-year deal, the Yankees turned to Ellsbury instead. Now that they may not find a way to bring back Cano, the focus has shifted back to Beltran who is still yet to sign with a team.

Another backup plan comes in the form of Choo, who the Yankees also considered before signing Ellsbury. They ultimately went with Ellsbury over concerns about Choo's significant issues against left-handed pitching but loved his on-base abilities. Signing Choo might allow the team to trade Brett Gardner in his final season before free agency to pick up a player at another position of need.

Hearing that the Yankees are prepared to move on from Cano with hopes fading that their All-Star second baseman will return for next season has to be discouraging, particularly when it seems as though they valued Ellsbury more than Cano, based on the deal he was given. If that is the case and they refuse to meet Cano's demands somewhere in the middle, it speaks volumes about what kind of value they placed on what Cano brought to the table.

If Cano ends up signing with the Mariners, who seem to be the only real competition for his services right now, the Yankees will need to find a way to replace his production on the free agent market or via trade. The lineup for next season looks awfully different without 30 home runs from Cano penciled in. Signing Beltran or Choo could help mitigate a little of that, but neither seems to be the complete player that Cano is.

At this point, it seems like little more than stubbornness getting in the way. Each side is playing chicken with the other, and it seems like the Yankees are about to lose their guy over it. With the news about Masahiro Tanaka becoming uncertain about whether or not he'll even be posted this offseason, the Yankees could end up without both of their top targets.