Could Arruebarruena be an eventual shortstop solution?

Cuban shortstop Erisbel Barbaro Arruebarruena has defected according to Baseball America writer Ben Badler. The Yankees have said that their shortstop hunting did not necessarily come to an end with the re-signings of Derek Jeter and Brendan Ryan, so it is certainly possible that they make an effort to sign the magnificently named Cuban, especially since Arruebarruena might be more of a future investment.

Arruebarruena will only turn 24 in March, but he has played six seasons at Cuba's highest level of baseball, Serie Nacional, where he was teammates with Yasiel Puig and Jose Abreu. Since he's been there for six years, he will not be subject to the international signings cap. He is regarded as a superb defensive shortstop, and Badler was quick to praise him both on Twitter and in his Baseball America story on Arruebarruena:

At 6 feet, 195 pounds, Arruebarruena has clean hands, quick actions and good body control. He’s a below-average runner, but his quick first step and instincts give him good range. He has a quick transfer and a plus-plus arm with accuracy, which allows him to make throws from deep in the hole and turn 4-6-3 double plays with ease. His awareness in the field is advanced and he’s shown the ability to make the barehanded play look routine and make strong throws from different angles.

His glove seems ready for the big time, but scouts have said that his swing likely needs work in the minors. Badler was much tougher on Arruebarruena's bat in his profile on the shortstop:

A righthanded hitter, Arruebarruena has a long swing, struggles with pitch recognition, swings through breaking balls in the strike zone and is prone to chasing too many pitches out of the strike zone. He has a pull-oriented approach and minimal power, so several scouts are skeptical he could hit better than .220 or hit a .300 on-base percentage against major league pitching. His lack of foot speed would also limit his appeal as a potential defensive-oriented backup, since he wouldn’t have as much value as a pinch-runner.

With the Yankees in such a bind for future in-house shortstop talent, it might not be a bad idea to pursue Arruebarruena since the system's best shortstop prospect is the disappointing Cito Culver. He would not likely cost as much as the recently-signed fellow Cuban shortstop Alexander Guerrero, and if the Yankees' system could help get his bat to somewhere around league-average, then his defense could make him a valuable asset. Even with his hitting struggles, he's further along in development than Culver. Taking a flier on Arruebarruena should be at least earn some consideration by the front office.

Most importantly, THINK OF THE SHIRSEY POTENTIAL! 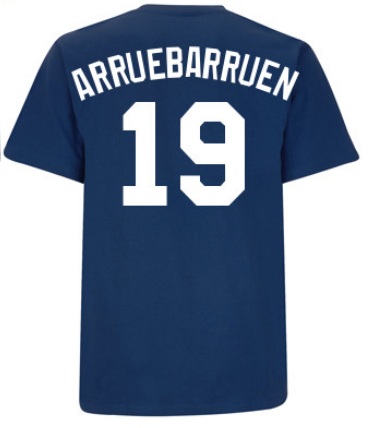 You can't even fit his last name on a customized shirsey in the Yankees' team store. Now that's brilliance. Check out how Team Cuba managed to configure his name onto a jersey. Pursue the madness.