Unlike last year, the Yankees have apparently entered the off-season ready to show free agents the money.

The not-as-legitimate-as-Winter-Meetings-but-still-more-interesting-than-awards GM Meetings are going on this week, and some reporters have tweeted updates on the Yankees' plans following just their second meaningless October in 19 seasons.

The Red Sox like McCann, but are hesitant to extend to the kind of years another team might offer. When asked about the 29-year-old late Monday night, one general manager flat-out said, "He’s going to end up with the Yankees." And there you have the prevailing opinion around baseball. New York needs that type of player, they have plenty of money to spend and they likely will get at least one draft pick back (from Curtis Granderson, Robinson Cano or Hiroki Kuroda) to off-set the pick potentially lost when inking McCann. 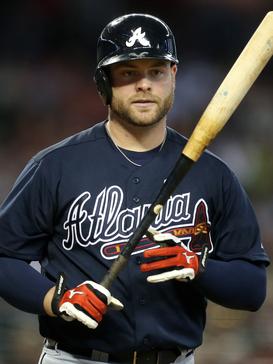 The Yankees got very little production from their catchers in 2013. They could improve in that area in a huge way by signing Brian McCann this winter.

McCann is, of course, the best catcher on the market and given the abomination that crouched behind the plate for the majority of last year, it makes sense that the Yankees would be highly interested in him. McCann is still relatively young for baseball at age 30, but catching for the bulk of 1,046 games already over nine years certainly takes its toll. He missed the first month of the 2013 season due to recovery from minor shoulder surgery in October 2012, and he threw out 24% of baserunners, a mark below league-average (28%). McCann is a 117 wRC+ hitter for his career, but he also had a subpar 87 wRC+ season as recently as 2012. While that figure would be far better than what the Yankees received from catchers in 2013, the Yankees also weren't paying over $10 million for that production.

McCann's next contract is going to be the biggest catcher contract we've seen in quite some time, one that will easily eclipse the five-year, $75 million extension given by the Cardinals to Yadier Molina prior to 2012. Molina was only half a year younger than McCann is now when he signed that contract, so that deal figures to be the baseline for McCann's free agent contract, which will actually include bidding as well. It's a risky proposition signing catchers to long deals, but at least McCann is not nearly as old as Jorge Posada was when he signed a four-year, $52.4 million deal with the Yankees at age 36. What would be the most you would offer McCann?

In non-Yankees GM meeting news, the Phillies made the first splash of the off-season by signing 36-year-old free agent Marlon Byrd to a two-year, $16 million deal. Byrd was originally drafted by the Phillies back in 1999 and spent his first two full years in the majors with the Phillies in 2003-04 before getting traded to the Nationals for Endy Chavez in May 2005. He bounced around with the Nationals, Rangers, Cubs, and Red Sox, achieving a modicum of success in Texas and an All-Star appearance with the Cubs in 2010. Most remarkable about Byrd is what he was doing just one year prior to receiving a multi-year deal:

Marlon Byrd, unemployed and playing in dirt outfields in Mexico this time last year, is signing for 2/$16m according to @AdamRubinESPN.

Byrd didn't sign with the Mets until February, but after agreeing to a minor-league deal with the Mets, he stunned baseball by hitting .285/.330/.518 with 26 doubles, 21 homers, and a 136 wRC+ in 117 games. Although the Mets decided to Mets it up and not trade him for future assets at the deadline, they did send him to the Pirates near the end of August, and he didn't stop hitting. Byrd had a fantastic September in Pittsburgh, as his .843 OPS in 30 games powered the Pirates to the NL Wild Card. In six playoff games, Byrd stayed hot with a .982 OPS, two doubles, and a homer. Now, he is getting his reward for a tremendous comeback year in 2013 with the highest-value contract of his 12-year career. Baseball!

So why is Byrd's deal relevant to the Yankees? Jesse has the answer:

Anyway, I think with Byrd getting two years that guarantees Beltran gets at least three.

Ding. Carlos Beltran was almost certainly receiving a deal better than the two-year, $26 million pact he got from the Cardinals prior to 2011, and Byrd's deal likely cinched it. If the Yankees want him, then they are almost certainly going to have to offer a three-year deal worth at least $30 million. Byrd didn't have nearly the reputation Beltran did, and he got a fine deal. Beltran has every right to ask for a deal of far more value than Byrd's contract. Would you want the Yankees ending up with a three or four-year deal of around $40 million for a soon-to-be 37-year-old outfielder who can't play defense that well anymore? Eh...