At 19, Andujar's very far away from big league action. But the potential is there for him to develop into a big league third baseman.

The Yankees signed Miguel Andujar for a $700,000 bonus out of the Dominican back in 2011, and immediately put him on the fast track. While most international signees spend their first professional season in one of the foreign rookie leagues, the Yankees brought Andujar stateside as a 17-year-old, assigning him to the Gulf Coast League Yankees. Andujar predictably struggled in 2012 during his first go-around in the GCL, but seemed to find his power stroke while repeating the level in 2013. In 34 games, he belted four homers and 11 doubles, while also cutting down on his strikeouts. 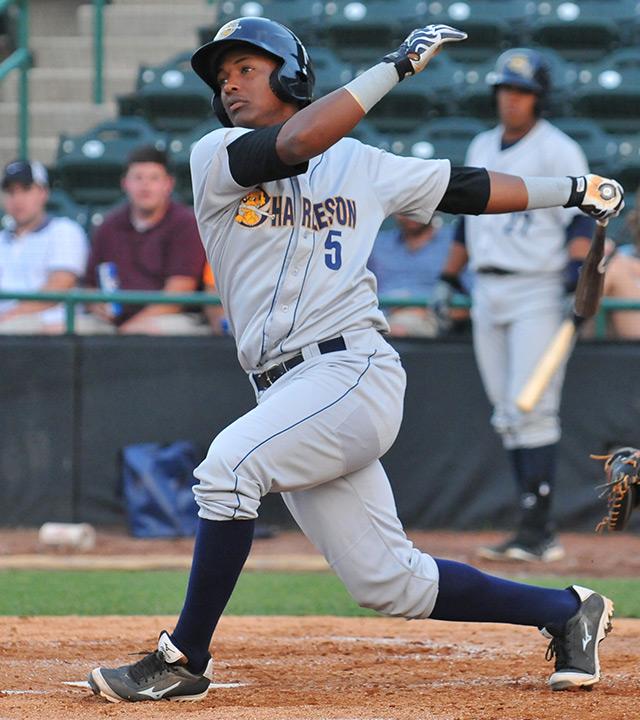 Believing in Andujar's tools, the Yankees challenged him once again by pushing him to Class-A Charleston as a 19-year-old. Although he got off to a rocky start, he really seemed to turn the corner around midseason. After hitting a dismal .219/.274/.332 in his first 69 games, he started hitting the ball with much more authority, which propelled him to an impressive .320/.367/.469 showing from June 26th on. All things considered, Andujar did a pretty fine job in 2014. Sure, he looked horribly overmatched at times early on, but he managed to make adjustments despite facing pitchers two or three years older than him on average. Andujar's defense still leaves a lot to be desired, however. He committed a whopping 26 errors in 120 games at the hot corner, which was good for a .919 fielding percentage. That's Eduardo Nunez territory. Still, despite all of the errors, scouts attest that Andujar has the tools to stick at third. Kiley McDaniel of FanGraphs says he has "an easy plus arm" with "a chance to be at least average defensively at third."

KATOH, my prospect projection system, isn't crazy about Andujar, giving him just a 54% chance of even cracking the majors through age 28. This unexciting projection has everything to do with the fact that Andujar is still years away from big league action. This is KATOH's standard stance on non-elite players in Low-A. The unfortunate truth is that most players in A-ball never even make it to the majors, let alone make any meaningful impact. But Andujar did some things last year that gives KATOH hope that he might rise above the rest. Despite being young for his league, Andujar did a decent job of both putting the ball in play (16% K%) and hitting for power (.130 ISO) -- the two metrics that are most predictive for players in the low minors. Here's a look at Andujar's odds of reaching certain WAR thresholds through age 28:

Andujar showed signs of life in last year's second half, but is still very far away from big league action, and will likely spend all of 2015 in High-A Tampa. In addition to his bat, one factor to keep an eye on going forward will be his defense at the hot corner. Although he has the range and arm strength to stick at the position long term, he really needs to cut down on the errors to be an acceptable big league third baseman. He still has plenty of time to work out the bugs on defense, but a move to first base or an outfield corner would dramatically reduce his odds of being anything more than a bench bat. Andujar's still rough around the edges, but there's plenty to like. His physical tools give me reason to suspect his late-season breakout will carry over into 2015.