Yankees prospect watch: My visit to the Trenton Thunder and a Luis Severino start

Before the minor league season came to a close, I got to visit the Trenton Thunder and watch the Yankees' best prospect pitch. Check out some pictures and videos from the trip.

Share All sharing options for: Yankees prospect watch: My visit to the Trenton Thunder and a Luis Severino start

Growing up in New Jersey, I was fortunate to have several minor league teams playing around me. However, I somehow never got around to seeing the Trenton Thunder in the state's capital, even when the Yankees began their affiliation with the Thunder in 2003. Checking out Arm & Hammer Park and some of the Yankees' top prospects was long overdue, so during Labor Day Weekend, I finally got around to visiting the ballpark.

It was Friday, August 29th, and the Thunder played one of their final games of the season, facing off against the Phillies' Double-A team, the Reading Fighting Phils. (Nifty name, bros.) Luckily enough, I was able to go to a game started by top Yankees pitching prospect Luis Severino, who has been absolutely sensational this year, soaring from Low-A Charleston up to Double-A while pitching to a 2.46 ERA and 1.06 WHIP in 26 starts. Huzzah.

Arm & Hammer Park is right next to the Delaware River, and I had hopes that perhaps someone could muscle it out of the park and into the next state. Unfortunately, the night was a bit windy and no one came particularly close to even hitting a regular home run. The wind that picks up from the river is notorious for helping make Arm & Hammer Park a big pitchers' park with consistently good offense being notorious to find among the Thunder hitters and visitors. Alas. Nonetheless, it was still a pretty park: 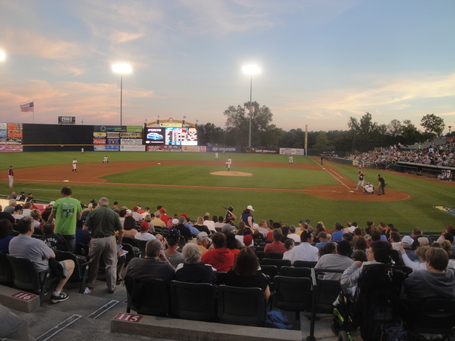 My seats were not in the front section since I did not order in time to find seats together for my sister, her husband, and me, but in a minor league park, it is not difficult to find cheap seats with an excellent view. Minor league baseball is truly magical to behold, especially in this age of high ticket prices at major league parks the closer you get to the field.

Anyway, I did not want to just make a post recounting a normal trip to the ballpark and talk about the food I ate since that's not very interesting to most readers. (Although Greg was disappointed that I did not try a Thunder Dog.) I brought my camera along to take photos and videos of the prospects. I was a bit disappointed in that regard because catching prospect Gary Sanchez did not play, and neither did Tyler Austin or Dante Bichette, Jr. There was a chance that Jacob Lindgren, the lefty reliever "Strikeout Factory" who was the Yankees' top pick in the 2014 MLB Draft, would pitch, but he did not come out of the bullpen on this night. Of course, Severino was pitching and PSA favorite Greg Bird was there as well, so I still left a happy camper. As an added bonus, the starter for Reading was righty Aaron Nola, the seventh overall pick of this year's draft and the top pitching prospect in the Phillies' organization. It's not every day two organizations' top pitching prospects face off, so that was a thrill. (This post is going to focus on the Yankees' prospects, but check out Nola's pitching motion on video. There's a reason the Thunder got shut out beyond the weather. The former LSU righty is gonna be good.)

One of the first things I noticed about Luis Severino is that the man does not take long in between pitches at all. Part of it might have been a product of minor league baseball hitters generally taking less time between pitches than major leaguers as well, but the 20-year-old righty could have an opposite-handed Mark Buehrle out there with his efficacy:

That trend was common throughout the night. Although he's small in stature, Severino's delivery was pretty smooth. Here it is in frame-by-frame and GIF form:

As far as repertoire goes on Severino, here's what MLB.com's prospect evaluators Jim Callis and Jonathan Mayo have to say on him:

Though he isn't especially big, Severino is strong, and he can run his fastball up to 98 mph. His heater usually sits at 94-95 mph and features some sink at the lower end of its velocity range. Both Severino's hard slider and his changeup have the potential to be solid or better offerings.

Ask Reading catcher Logan Moore about that slider and he would probably not say kind things, as he struck out against Severino leading off the third:

Here, Severino handles a comebacker. It was not a tough play, but it was an example of how Severino's pitching motion puts him in a good position to field, something Mike Mussina would smile about:

Severino was eventually tagged with the loss, though pitch count can partially be to blame for that. With the Yankees not wanting to push him in his final start of the season, he departed the game with two outs in the top of the fifth after 72 pitches. A rare walk had led off the inning, and though he got the next two outs, Thunder manager Tony Franklin gave him the hook. Reliever Phil Wetherell promptly gave up an RBI double to center that Mason Williams did not handle well, and the runner came around to score. Oh well. Severino's pitching line on the night was still splendid: 4 2/3 innings, five hits, one earned run, one walk, and four strikeouts. Watching him pitch live was awesome, and it only made be more excited about watching him climb the minor league ladder again in 2015.

Check out some of Severino's teammates: 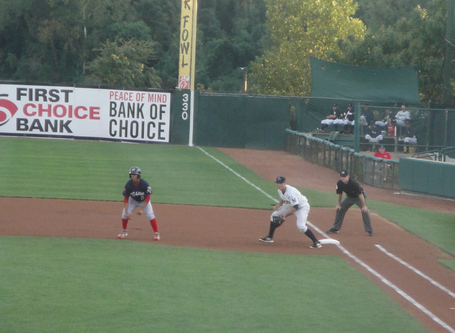 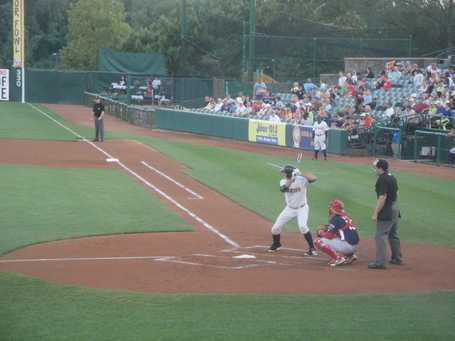 Bird hit third in the Trenton lineup and this single was Bird's only hit of the night. Clearly, he did not like me as much as Tanya, who he hit three home runs for when she saw him play for Low-A Charleston last year. Tear. 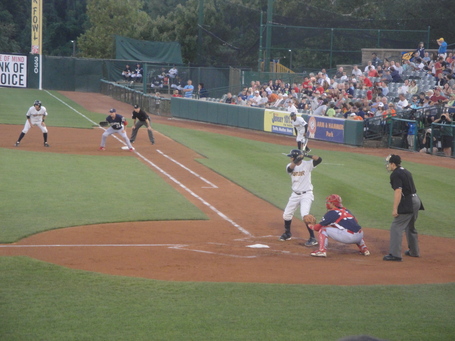 Mason continued his frustrating year with the aforementioned misplay in center and an 0-for-3 that included a strikeout. He did manage to work a walk though so there's that, I suppose. 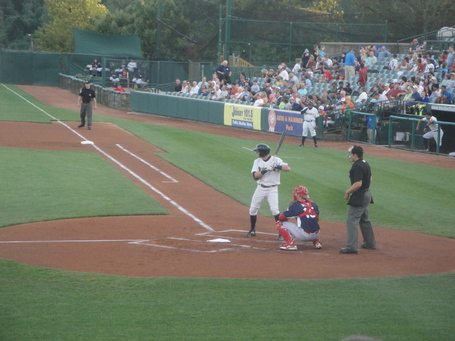 An intriguing sixth round pick from the 2011 MLB Draft, injuries wrecked Cave's first two professional seasons, but he's bounced back nicely, first with a .282/.347/.401 triple slash in Charleston last year and now with a productive .294/.351/.414 split between Tampa and Trenton this year. One writer said that he reminded him of a younger Brett Gardner, and that's obviously not a bad guy to be compared to at all. However, this night was not a keeper--leading off, Cave went 0-for-5 with a pair of strikeouts. 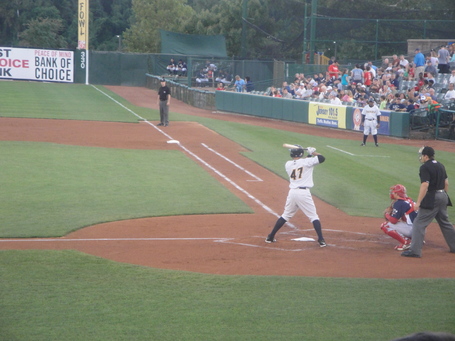 Injuries curtailed a promising start to the 2013 season for the former Tulane grad in Trenton last year, and he hit so well in 2014 with the Thunder (.283/.398/.428 with a 135 wRC+) that the 25-year-old was promoted to Triple-A Scranton in mid-July. That month-long stint did not go well, as he managed just 11 hits and four walks in 85 plate appearances, so he returned to Trenton in mid-August. Perhaps he'll get another shot in the Electric City next year. As the cleanup hitter, Segedin went 1-for-3 with a double and a walk. That double followed Bird's single and was Trenton's best chance at scoring on the night, but backup catcher Francisco Arcia flew out to end the inning.

I also took photos of outfielder/DH Ben Gamel, second baseman Dan Fiorito, and reliever Mark Montgomery. The hard-throwing strikeout artist is the most well-known of those three, and he did pitch well over the final two innings, striking out two while allowing just one hit to lower his Trenton ERA to 0.84. Demoted from Scranton to Trenton in June after posting an ugly 5.5 BB/9 and 1.315 WHIP in the International League though, he will need a strong 2014 to reclaim his previously high relief prospect status.

There was also a kinda scary mascot named Boomer who was trolling around. He is apparently a "thunderbird." Okay then. Here he is tossing sparkles from the top of the ballpark onto innocent civilians. Run. 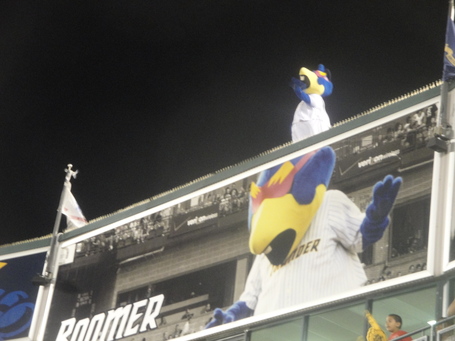 Of course, the Thunder's true mascot is Derby, the adorable batdog. Succeeding his dearly departed father Chase in this position, Derby retrieved the bat from several Trenton players in the first couple innings, and it was every bit as adorable as as you could imagine. Derby is the best, and there should really be more batdogs around baseball. His son Rookie will join him next year, and it will be delightful. Here's Derby in action, retrieving Greg Bird's bat:

Get a batdog, Yankees. You know you want to.

When Cave flew out to end the game, my evening with the Thunder was over. I would be happy to come back, and I'm sure I will next year. If Aaron Judge and his exciting Tampa teammates want to join, they are more than welcome. I highly recommend checking out the Thunder if you get a chance to do so next year. Derby and his friends will make sure you don't regret it.