Yankees Prospects: Kyle Roller is hitting to all fields now

A new man! The same man!

Share All sharing options for: Yankees Prospects: Kyle Roller is hitting to all fields now

For a long time Kyle Roller has been on the fringe of the prospect picture in the Yankees organization. Never really someone expected to do much, but not a guy you could totally ignore. Limited to first base, and with a tendency to strike out a ton, Roller never got much attention from anyone really, but he came into 2014 with a new approach and has seemingly change the way he hits the ball.

"I think early in my career I was definitely more of a pull hitter. People were getting me out by just throwing balls over the outer half of the plate. Knowing I could hit the ball the opposite way whenever I needed has helped me mentally. It's a big part of my game."

The change in approach seems to be working out pretty well for him: 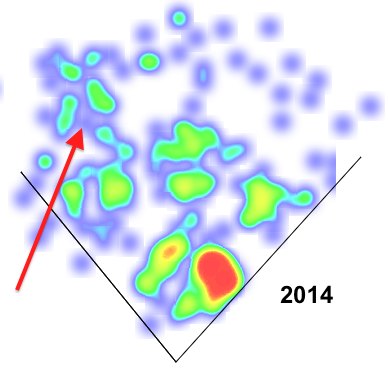 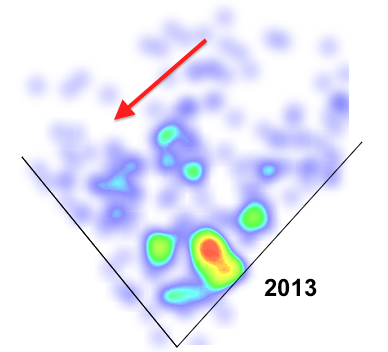 As you can see, the left-handed bat is not just bashing the ball to right field anymore. Now in 2014, he's hitting the ball considerably more to left and is even turning his control of pitches into power. He's hitting a lot more ground balls to the right side of the infield, but he's also more than making up for that with solid hits to every part of the ballpark. While a left-handed pull hitter is exactly what a hitter at Yankee Stadium wants to be, growing up to be someone who can hit the ball everywhere is much better for his career overall.

With Mark Teixeira unable to stay healthy for very long, some thought that Kyle Roller could find his way onto the team this season in order to fill in at first and provide a boost to the offense. Despite his success this season, the Yankees seem to know better, like they do with Jose Pirela, and have not brought him up as of yet. September is just around the corner, and though the Yankees have plenty of major league options to play behind Tex, you can't rule out someone with his kind of power, even if he just ends up as a pinch hitter down the stretch. His transformation as a hitter in 2014 is bound to change his situation somehow.