The Yankees selected 21-year-old Jacob Lindgren in the second round of this year's draft and he promptly signed. What can the Bombers expect from him going forward?

Last week, I found comps for Yankees' pitching prospect Ian Clarkin by using information from a scouting report to query the PITCHf\x database. Today, I repeated this exercise for lefty reliever Jacob Lindgren, the Yankees' second round pick out of Mississippi State. For this analysis, I considered all left-handed pitchers with at least 1,000 pitches (or roughly 60 innings) since 2008.

Lindgren throws pretty hard, sporting a fastball in the low-to-mid-90s. Here's the skinny on his fastball from Baseball America:

"He worked at 92-94 with runners on base in the third before dialing it back to 90-92 in subsequent innings...He regularly reaches 93-94 mph with his fastball with heavy life and arm-side run."

Break angle: Less than -30 degrees. This filter is meant to only capture fastballs with "heavy arm-side run". For left-handed pitchers, about half of all fastballs fall within this classification. 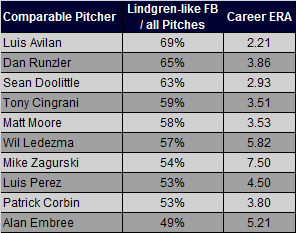 "His slider was unhittable, an 82-84 mph wipeout pitch that bumped 86. He back-footed it against righthanded hitters but also got several righties to chase it down and away, unusual for a lefthanded slider with so much tilt."

Break length: At least 9 inches. A little less than half of sliders thrown by left-handed pitchers break more than 9 inches, which would be "unusual for a lefthanded slider". 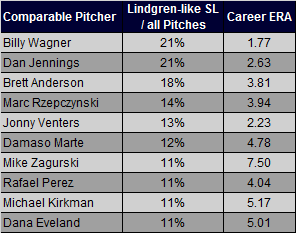 Pulling it all together

To get a final list of comps, I summed each player's "Lindgren-like" pitches for both pitch types. To remove players who throw only one of Lindgren's pitches (ie. a fastball-heavy pitcher who doesn't throw a slider), I also restricted the list to players who throw each pitch at least 5% of the time. I also only considered pitchers who throw primarily in relief. 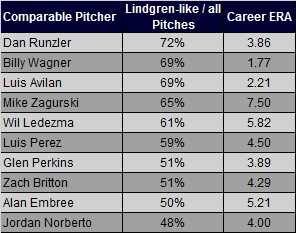 Lindgren throws hard and throws with his left hand. That combination makes him easy to dream on, and the thought of adding a Billy Wagner or Luis Avilan type to the bullpen certainly seems appealing. But then again, stuff isn't everything -- even for a reliever. There are guys out there -- like Dan Runzler and Mike Zagurski -- who have good stuff, but can't stick in the big leagues because they walk too many batters. Lindgren's a fairly polished pitcher, but his command is reportedly still a little suspect. Per Baseball America, "Lindgren lacks command, and his control usually is just enough". The future certainly looks bright for Lindgren and he should be able to help the Yankees sooner rather than later, but, as with any pitcher with good stuff, a lot rides on how well he'll be able to control and command his pitches.