Hey, this is new and different!

John Sickels of SB Nation's Minor League Ball released his Top 150 prospects list for 2014 today, and a familiar name has come out on top. Masahiro Tanaka, the Yankees' prize offseason acquisition from Japan, was Sickels' highest rated prospect with a grade of A. Not everyone will agree with Sickels choosing to put Tanaka on the list at all, considering that he'd been pitching in professional baseball in Japan for many years. Baseball's rules make him eligible for Rookie of the Year honors, so it probably makes sense that he would be on this list. If he's going to be eligible to make the list, a #1 ranking also makes a lot of sense. The Yankees have really struggled to draft and develop top prospects over the last few seasons, and though they can take no credit for doing either with Tanaka, it is nice to see someone on our side at the top of one of these lists again. 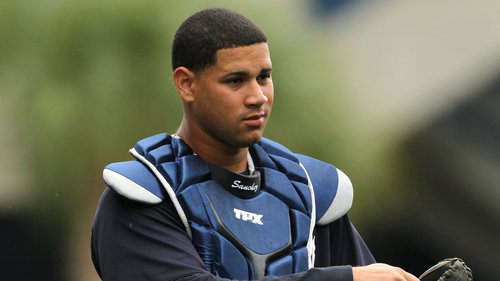 Three other Yankees prospects made Sickels' Top 150: catcher Gary Sanchez at #38, third baseman Eric Jagielo at #122, and outfielder Aaron Judge at #145. Sickels also lists outfielder Tyler Austin and first baseman Greg Bird as players who are in the picture. Early high ratings for Jagielo and Judge hopefully means success ahead for all the draft picks the team raked in last season with two of their three first round picks already finding their way onto a top prospect list. Judge is off to a booming start with the Charleston RiverDogs and Jagielo was aggressively placed in High-A to start the season, hopefully meaning that the Yankees are willing to move him through the system quickly with infield help desperately needed at the big league level. Sickels gave Jagielo a B rating and Judge a B- rating.

Gary Sanchez received a B+ grade from Sickels, continuing to be the most promising asset the Yankees have on the farm. There have been mixed reviews about whether or not Sanchez will be able to stay behind the plate with some saying he's made great strides and others saying they don't think it'll work out. Still, he's managed to carry himself with his bat and finds himself performing very well for the Trenton Thunder in the early going in 2014. The Yankees did give Brian McCann a five-year deal this offseason, but I'd expect some kind of first base/DH/catcher/backup catcher rotation to go on between McCann, Sanchez, and Mark Teixeira by the time Sanchez is ready for the majors. That is, of course, assuming that Sanchez continues his development. Sometimes it is overlooked how young Sanchez is because he hasn't flown through the system. He's still got plenty of time to make it.

You can view the whole Top 150 by heading over to Minor League Ball by clicking here. What do you think of the decision to put Tanaka at #1? Do you agree with where Sickels has ranked the rest of the Yankees' prospects?