The former Yankee has meant so much to the city of New York over the decades, and all baseball fans are pulling hard for him.

Share All sharing options for: Taking time to appreciate Mel Stottlemyre as his fight against cancer intensifies

Wednesday afternoon brought happy times to Yankees fans, as their team finished off a big West Coast sweep of the Mariners, moving them to four games over .500 in a tight AL East race. Unfortunately, the day was not all good news. Later that day, John Harper, the Daily News columnist and author of Mel Stottlemyre's biography Pride and Pinstripes, wrote that the beloved Yankee's multiple myeloma returned and was more vicious than ever. Fifteen years ago amid their championship season of 2000, Stottlemyre was initially diagnosed with the disease, but like Joe Torre the year before with prostate cancer, he underwent successful treatment and thankfully resumed his normal life without a problem.

Toward the end of 2011 though, the myeloma returned, and the past few years have been grueling for Stottlemyre. I don't think I actually have to explain how awful a disease cancer is, as I would be stunned if there were any commenters who don't have at least one family member or friend who has been affected by it. The chemotherapy is brutal and Harper noted that Stottlemyre can't even undergo surgery to repair a torn Achilles tendon due to the treatment. There's no beating around the bush--cancer is the goddamn worst.

Hearing about Stottlemyre's troubles is especially difficult because he has affected so many generations of baseball fans. Long before he became a coach, he was one the Yankees' few bright spots during a very dark and turbulent decade. He was just 19 years old when the team signed the Washington state native in 1961. The young righty stormed through the minors and within just three years, he found himself on the mound in the 1964 World Series opposing the intimidating Hall of Fame ace Bob Gibson.

That challenge alone would probably have shaken most 22-year-olds, but that wasn't Stottlemyre. In his first season, he had made 12 starts over the season's final two months, greatly impressing manager Yogi Berra with a 2.06 ERA (59 ERA-) and a 3.15 FIP (85 FIP-), helping the Yankees rally down the stretch to capture their fifth straight American League pennant. Remarkably, Stottlemyre made three starts in that Fall Classic, notching a complete game victory in Game 2, pitching six innings of two-run ball in Game 5, and ultimately making the Game 7 start against Gibson on a mere two days' rest. The Yankees might have lost that game, but it was unlikely that they would have ever gotten that far without the efforts of their burgeoning ace.

1964 would be the only playoff appearance of Stottlemyre's career, a fact that would have been unfathomable to any Yankees rookie just a few years prior. But ownership had changed to the barely attentive CBS group, and the quality on the field was aging, underwhelming, and extremely unimpressive. My mom often talks about the so-called "Horace Clarke Years," and believe me, fellow whippersnappers--If you think the Yankees have been poor since 2013, then you have no idea about the true meaning of "poor." These Yankees were among the worst teams in the league, bottoming out with their first last-place finish in half a century in 1966 and failing to reach the playoffs for 12 years. During that stretch, they only finished within even 10 games of a playoff spot twice. It was hot trash. 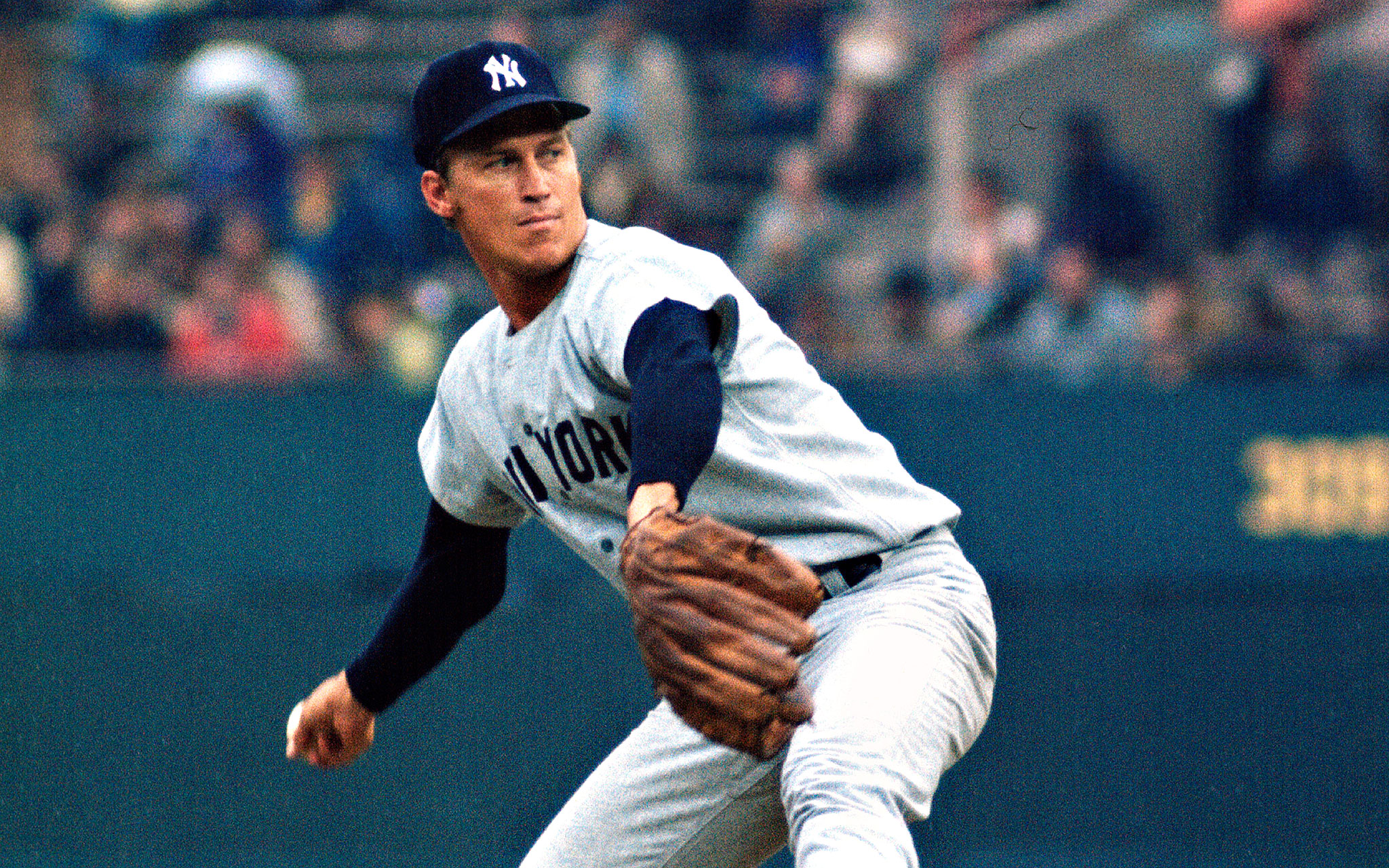 Yet throughout it all, there was the sinkerballing Stottlemyre, pitching with minimal run support and still churning out five All-Star seasons. He was staggeringly good, averaging 272 innings per year from 1965-73 with a 2.98 ERA, 3.36 FIP, and 141 complete games (leading the league twice), including 38 shutouts. The heavy workload took its toll, as by the end of 1974, his shoulder was toast at the mere age of 32. Stottlemyre suffered an ugly rotator cuff injury, from which he never recovered, forcing him to miss the eventual championship glory of 1977-78. Stottlemyre's name is ever-present among Yankee pitching leaderboards--he's tied for second in shutouts with 40, fourth in innings and games started (2,661 1/3 in 356 starts), seventh in strikeouts (1,257), seventh in wins (164), eighth in complete games (152), and eighth in WAR (40.6). Just for kicks, he's also the only pitcher in major league history to ever record an inside-the-park grand slam, which he did on July 20, 1965.

A career that good might have been enough for most major leaguers, but Stottlemyre was far from done. When the state of Washington was finally given its own team again in 1977 with the Seattle Mariners, they reached out to Stottlemyre and asked if he would help them out. The former All-Star consented, and after six years there, he was hired by rookie Mets manager Davey Johnson as his pitching coach in 1984. It was under Stottlemyre's tutelage that Dwight Gooden emerged as a Cy Young Award-winning phenom, and the Mets won 108 games and the World Series title in 1986 with a tremendously accomplished starting rotation. A decade later, Stottlemyre was finally back in Yankee pinstripes, selected by new skipper Joe Torre as his pitching coach for the 1996 season. He found the postseason glory that eluded him a couple decades prior, as the Yankees made the playoffs every year with him as the pitching coach, winning four World Series and six AL pennants. Andy Pettitte, Mariano Rivera, Roger Clemens, David Cone, and David Wells were among many pitchers who excelled with Stottlemyre's guidance.

After a dispute with George Steinbrenner (surprise, surprise), Stottlemyre resigned at the end of 2005. He spent a couple years as the Mariners' pitching coach, but he has mostly been in retirement since then. Stottlemyre was involved in baseball for almost 50 years from his time in the minors up until the end of his tenure as a pitching coach. Along the way, he and his wife Jean had two kids who also became major league pitchers in Todd and Mel, Jr. Sadly, cancer affected them long before Stottlemyre's personal fight, as they lost another son, Jason, to leukemia when he was just 11. He is all too familiar with the pain it causes and now faces it again, head-on.

By all accounts, Stottlemyre is an incredibly kind friend and wonderful ambassador for the game. The Yankees community in particular has been hit particularly hard by cancer over the years dating back to Babe Ruth's fight against throat cancer, including memorable battles by Mickey Mantle and Stottlemyre's equally beloved teammate, Bobby Murcer. All fans of baseball must cross their fingers and hope for the best for Mel.