After some very college-heavy drafts in the mid-aughts, the Yankees have started to take more high school players.

Across baseball, teams are drafting more college players than ever before. In total, the ratio of college players selected in the draft has been on the rise, reaching an all time high of 70% last June. This new philosophy was brought to light -- and possibly accelerated -- by Moneyball, Michael Lewis' best-selling book-turned-movie. A large portion of the book was devoted to the 2002 draft, where Billy Beane's Oakland Athletics drafted a college player with their first 23 picks of the draft. Beane's theory was that college players were inherently less risky than high schoolers considering they were so much closer to the majors. Given the attrition rate of prospects, this theory seems to make sense.

But the Yankees appear to have adopted different philosophy. Although they selected two college bats -- Eric Jagielo and Aaron Judge -- in the first round last year, they seem to have shifted towards drafting more high school players. In the last three years, they've used 58% of their picks on high school kids -- fourth lowest behind the Blue Jays, Mets, Red Sox, and Phillies. Drafting high school heavy wasn't always the Yankees' strategy. In fact, not too long ago, they were all about drafting college players. From 2004-2007, nearly 80% of Yankees draftees were college products. 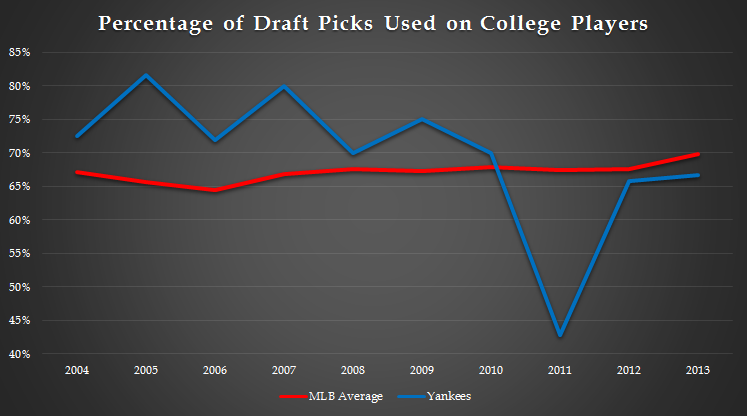 Last decade's Yankees went particularly hard on college talent in the early rounds, especially when it came to pitching. From '04-'07, the Yankees drafted 22 times in the first five rounds and selected 13 college pitchers, including first-rounders Jeff Marquez, Ian Kennedy, Joba Chamberlain, and Andrew Brackman. Unfortunately, this group of arms never amounted to much, accumulating just 7 fWAR for the Yankees. None of the 13 remain in the organization today, and only Chamberlain pitched a meaningful number of innings for the Bombers:

The Yankees went college-heavy in the later rounds, as well, in terms of both hitters and pitchers. But other than David Robertson (19th in 2006), they didn't get a heck of a lot from their later-round college selections. As for their college hitters, only Brett Gardner (3rd round in 2005) has had any sort of success. Pretty much all of their other picks -- including Colin Curtis (4th in '06), Bradley Suttle (4th in '07), and Damon Sublett (7th in '07) -- have provided zero return. As a result, the Yankees' return on college draftees has fallen well short of what other teams have received.

Average WAR values calculated for both high school and college players for each year.

On the whole, the Yankees haven't done a particularly good job of drafting and developing college players, especially considering the number of early-round picks they've expended on them. Their track record with high school players hasn't been great, either, especially in recent years. Here's a look at all Yankees' draftees who have produced more WAR than the average pick going back to 2000: 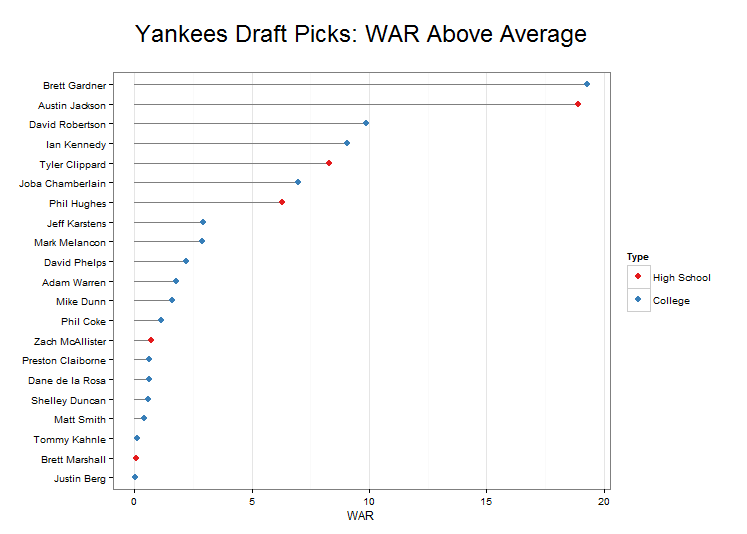 Average WAR values calculated for both high school and college players for each year.

Not a heck of a lot going on there. Other than a few bright spots, the Yankees haven't had much success, and have cultivated more relievers than anything.

It's hard to say for sure if the the disappointments of guys like Marquez and Brackman have played a role, but the Yankees have definitely cooled on college players since the mid-aughts, and have started to shift their focus to high schoolers -- particularly when it comes to pitchers. Most notably, they drafted two first-round high school arms in the last two years in Ty Hensley (2012) and Ian Clarkin (2013). This trend hasn't been limited to the first round, as the Yankees have selected a total of 33 high school pitchers in the last three years, more than any team in baseball other than the Blue Jays. In addition to Hensley and Clarkin, some of their more notable picks have included Jordan Cote (3rd in '11), Rookie Davis (14th in '11), Caleb Frare (11th in '12), Brady Lail (18th in '12), and Daniel Camarena (20th in 2011). 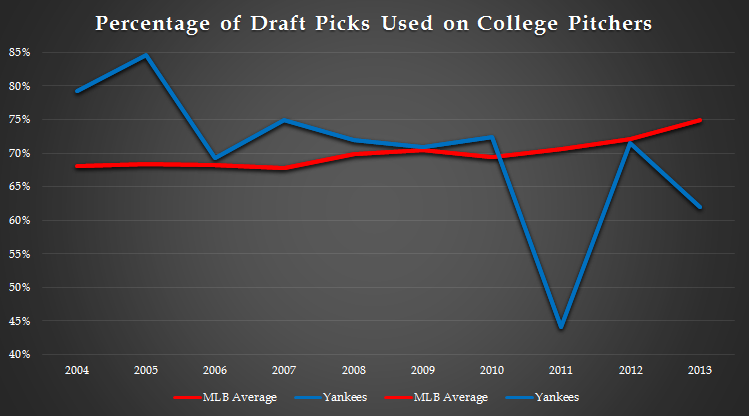 The Moneyball drafting strategy makes a lot of sense, as there's a lot less uncertainty tied to 21-year-old than an 18-year-old. Still, there's an argument to be made for taking a player straight out of high school. By getting a player in the system earlier, teams have more of an opportunity to coach him and mold him into the type of player they want him to be. Maybe this is what the Yankees are hoping to accomplish, but in any event, its not hard to see why they felt the need for a change. Their player development has been terrible for a couple of decades now, and whatever they were doing before didn't seem to be working. Even if going the college route is the smart choice, the Yankees were clearly not targeting the right college players.

Headlined by Clarkin, Hensley, Dante Bichette Jr., and Gosuke Katoh, the Yankees have added a promising group of high school products in the last few of years. Most of these players are still just babies, and it's still far too early to rate the fruitfulness of these last few drafts. But there's reason to be optimistic. Some of these recent picks -- like Bichette, Greg Bird, Jake Cave, and Brady Lail -- are already putting up solid numbers in the low minors. Time will tell if the Yankees' new, high school-centric draft strategy will pan out. But with any luck, these last few drafts will at least provide a greater return than the college-heavy cohorts of the mid-aughts.