Former Yankees on the 2014 Hall of Fame ballot

There are plenty of former Yankees on the loaded 2014 Hall of Fame ballot. Here's a look back at each of their careers and how they might fare in the polls.

Share All sharing options for: Former Yankees on the 2014 Hall of Fame ballot

The 2014 Hall of Fame ballot is chock full of players whose work on the field warrants election to Cooperstown. There are 36 former players on the ballot and one quarter of them spent at least part of their career in pinstripes. How do they stack up? Note that each player's JAWS (developed by Jay Jaffe) is given below along with the average Hall of Famer's JAWS for the player's position. JAWS is a Hall of Fame rating system based on WAR that incorporates both career and peak value. For a detailed explanation click here.

A top prospect for the Yankees in the early 90's, Snow was stuck behind Kevin Maas and Don Mattingly on the depth chart, so he played in only seven games as a Yankee. He was traded to the Angels in exchange for Jim Abbott and went on to have a decent enough career to stick in the majors until he was 40 years old. Despite his reputation as a great fielder, advanced defensive metrics rate him as well below average. He'll be off the ballot next year.

Hall of Fame ballot announced: Who should go in? 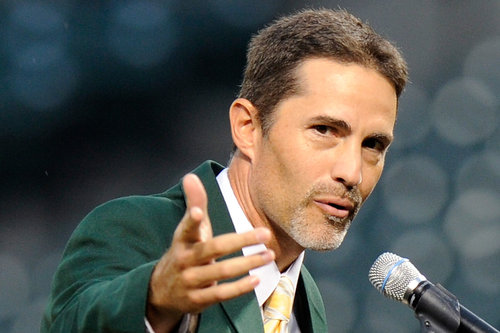 Players who last suited up in 2008 are on the Hall of Fame ballot. Who should go in?

Benitez was a flame-throwing reliever who was prone to an occasional meltdown, especially when pitching against the Yankees. After wearing out his welcome as the Mets' full-time closer, the Yankees acquired their former whipping boy for spare parts in the middle of 2003. He pitched nine solid innings before being flipped again for fan favorite Jeff Nelson just three weeks later. The big right-hander was a strikeout artist but lacked the control and composure to be considered a Hall of Famer.

A classic "swing for the fences" player who made his hay by hitting home runs on a consistent basis and doing very little else. Dave Kingman would be proud. Sexson hit enough long balls to make himself valuable over a six-year period split with the Indians, Brewers, Diamondbacks, and Mariners. By the time he was 33, his power was all but gone and Seattle put him out of his misery in the middle of the 2008 season. The Yankees then curiously signed him in a predictably unsuccessful attempt to make the playoffs before he left baseball for good. This will be his first and only appearance on the ballot.

The former saves king was a true mercenary, pitching for eight different teams throughout his long career. He spent his early major league days as an old school closer for the Cubs, often pitching more than one inning to earn his saves. After the Eckersley Revolution, he settled into the one-inning closer role while spending no more than three full seasons with any one team. The Yankees acquired him for the stretch run in 1993, where he pitched eight shutout innings before moving on to Baltimore the following year. Smith received almost 50% of the vote last year and still has four years of eligibility left but with a crowd of more qualified candidates in front of him, it seems unlikely he'll make it.

Most middle-aged Yankees fans grew up without the pleasure of World Series wins, but were pleased anyway thanks to the quiet grace of Donnie Baseball. During a string of maddeningly underachieving teams in the mid 80's, Mattingly was one of the few bright spots. Over a four year period from 1984 to 1987 he was in the argument for best player in the major leagues. Unfortunately, a series of back injuries took their toll and he was never that same player again. As captain of the Yankees for the first half of the 90's, he helped sew the championship seeds that would bloom in the second half of the decade. After receiving only 13.2% of the vote last year and with only one year of eligibility left, it appears that Donnie's fate will lie in the hands of the Veterans Committee.

The Gambler spent four years toiling as a middle reliever before becoming a full-time starter at age 28 with the Texas Rangers. After three solid years as a starter which included a prefect game, the Yankees signed him to round out their rotation in 1996 but his stay in New York was tenuous at best. He was unceremoniously shipped out in return for a player to be named later (Scott Brosius) after the 1997 season. He spent the rest of his career bouncing around between five teams, including two more stops in Texas. He remained effective into his age-41 season, which may or may not have been aided by foreign substances. Depending on your perspective, it's either hilarious or sad that he likely won't make it to next year's ballot despite a JAWS that rates him more than five wins better than Jack Morris.

Poor Tim had some bad timing. He broke into the major leagues the same year that Rickey Henderson did and if Henderson hadn't set the bar for leadoff hitters sky high, we might be saying that Tim Raines is the greatest leadoff hitter of all time. Ditto for base stealers. Another contemporary, Tony Gwynn, was a first-ballot Hall of Famer on the strength of his consistently gaudy batting average. Raines is now on his seventh ballot even though he was every bit as valuable as Gwynn, albeit less conspicuously with lower batting averages but far more walks. The Rock established himself as an all-time great while tucked away in Montreal and continued to play at a high level well into his late 30's. The Yankees picked him up for peanuts at age 36 in 1996 and he was a key role player on two World Series winners. His Hall of Fame case finally seems to be gaining steam and when he does get elected, it will be long overdue.

Mike Mussina probably doesn't pass the Hall of Fame gut test for most sportswriters. He just doesn't feel like a Hall of Famer. However, what he lacked in superlatives he made up for with maddening consistency and a command of his vast repertoire second only to Greg Maddux. For ten years, he earned his reputation as a top of the rotation starter with the Baltimore Orioles and performed equally as well over the next eight for the Yankees. Although he never won a Cy Young award, the Moose's consistent greatness is probably best evidenced by Bill James' Gray Ink Test. The test counts the number of times a player appears in the top 10 on yearly leader boards for key stats. The average Hall of Famer scores 185 on the test. Mussina has an impressive 250 Gray Ink score. With so many great pitchers on this ballot and more on the way in the coming years it will be an uphill battle for him to get elected, but it's an honor he deserves.

Looking strictly at career achievements, Roger Clemens is, arguably, the greatest pitcher of all-time. For the majority of his career, he pitched like a Frankenstein monster that was patched together with the best attributes of the great pitchers before him. He didn't really have a weakness until he came to the Yankees via a blockbuster trade in 1999. In his handful of seasons with the Yankees, he wasn't terrible, he just underwhelmed relative to the standard he had set. Regardless, he was a very effective pitcher well into his 40's and his career numbers speak for themselves. But that's not what this is about. It's clear that some members of the BBWAA have now made the Hall of Fame vote less about baseball and more about steroids. Clemens and fellow perjurer Barry Bonds are now the poster boys for writers that are eager to hold back from casting votes for steroid users or even players that they think might have used steroids despite no actual evidence. In the case of Clemens, suppose he only took steroids from 1998 (when the accusations start) until the end of his career. That would mean his career up to 1997 is not tainted by steroids and in those years alone his JAWS is nearly 20 wins above the Hall of Fame standard. He was an all-time great pitcher even without steroids, so he should probably get a plaque in the museum dedicated to all-time great players sooner or later.