Yankees trade deadline: Toeing the line of prospect hugging vs. risking the future

Brian Cashman has a tough decision to make: Is it worth it to give the Yankees the best possible chance to win in 2015 at the possible expense of their future?

Share All sharing options for: Yankees trade deadline: Toeing the line of prospect hugging vs. risking the future

General manager Brian Cashman has had near-complete control of the Yankees' baseball operations for about a decade now. Before that 2005 extension, the Yankees' management was a kerfuffle of confusion, as George Steinbrenner went back and forth between trusting Cashman and going with the instincts of his Tampa-based colleagues. The times have mostly changed since then, and while occasionally management will still reportedly go over his head on deals (the Rafael Soriano and Ichiro Suzuki signings come to mind), Harry Truman would say the buck pretty much stops at Cashman.

In those 10 years, the Yankees have not produced many quality minor leaguers. This unfortunate result can be linked to typically late draft picks as a result of free agent compensation and high-win seasons, but that does not completely absolve Cashman and his team of the blame--just ask the similarly successful Cardinals. Although Cashman was extended at the end of the 2014 campaign, the Yankees did have a thorough re-evaluation in 2013 of their farm system results. Some people changed positions, the team adopted different strategies, and it's been intriguing to see the results since then.

Halfway through the 2015 campaign, it's becoming more difficult for fans of other teams to regard the Yankees' farm system as a punchline the way they once did. Outfielder Aaron Judge is one of the top hitting prospects in the game, and despite his somewhat concerning delivery, it is quite evident that starter Luis Severino has an electric repertoire. These top prospects are complemented by a number of other fascinating young players, from the ever-patient Gregory Bird to the speedy Jorge Mateo and power-hitting catcher Gary Sanchez, all of whom have either been previously ranked or will soon be ranked among the game's Top 100 Prospects. There's a seemingly never-ending supply of hard-throwing relievers and during the 2014-15 international free agent signing period, they went over the spending limit to sign a remarkable number of talented teenagers who will be fun to watch develop in the several upcoming years. This isn't exactly the Cardinals' system, but it's a great start.

At the beginning of the season, it did not seem like the Yankees' current major league squad was in the best position to win this year. The past two years have been quite up and down with negative run differential a common theme, and the Yankees needed huge bounce-back seasons if they had hopes of jumping to the top of the AL East. Well, they got them. Alex Rodriguez and Mark Teixeira have been simply magnificent, carrying the Yankees to a surprising seven-game division lead around the time of the trade deadline. Sure, there have been huge contributions from other contributors like All-Star Brett Gardner, the steady Brian McCann, and a lights-out bullpen, but the stars of the show have been Teixeira and A-Rod. 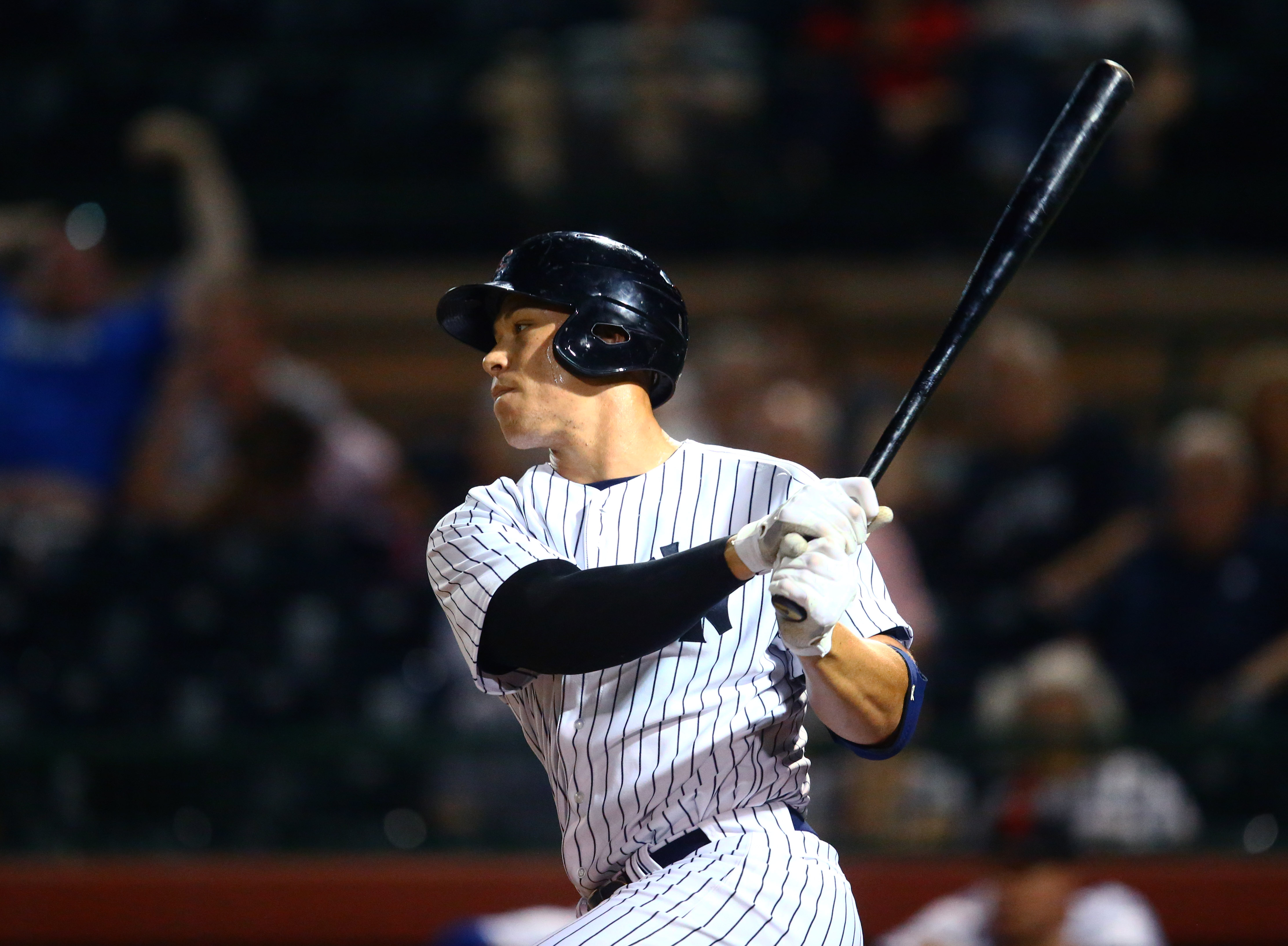 The key winning in 2015 might cost an Aaron Judge, but is the improvement worth it?
(Photo credit: Mark J. Rebilas-USA TODAY Sports)

No one should be doubting the fact that the Yankees have about a good a shot at the AL pennant as anyone right now. It has been awesome to watch and quite refreshing after a couple years of somewhat crappy baseball in the Bronx. I wouldn't trade it for anything. However, it has put the Yankees in a bit of a tough position regarding their future. Given their advancing roster age, 2015 might be their best chance at a World Series title; even if all the aforementioned young players come up within the next couple years and make an impact, there will probably be a learning curve that might regress the team to 2013-14 levels. So now Cashman is faced with a tricky choice--Does he deal away some of those talented prospects to boost the 2015 squad's chances?

There are prospect huggers among all 30 teams' fans. That's not unique to the Yankees at all. It does seem like the Yankees' supporters are more ardent than most though, perhaps because there have been so few quality minor leaguers to emerge in the Bronx over the past decade. Homegrown players are naturally exciting to watch, and many fans fondly recall when the likes of Derek Jeter, Mariano Rivera, and Bernie Williams all came up to the big club. Those fans need to take a step back. Getting two clear Hall of Famers and three borderline Hall of Famers to emerge at the same time is exceedingly rare. If even one of the Yankees' current top prospects approaches those levels, then fans should consider themselves lucky. Almost all prospects are expendable in their own way--that's how the Yankees acquired David Cone in '95, Cecil Fielder in '96, and David Justice in 2000. Well-regarded minor leaguers were dealt in all three of those deals, and the Yankees ended up reaping the benefits. Even in the system right now, pretty much everyone has to be available in the right trade.

That being said, the Yankees were in a different situation when those trades were made. They already had cheap, young talent with Bernie, Jeter, and crew. They could afford to deal prospects they liked, even if guys like Matt Drews were also quite liked. If the Yankees traded one of their top prospects like Severino or Judge, then who is there to back them up? This roster is going to have to be filled with more young talent eventually; a team can't simply just keep dealing until there are not many lottery tickets remaining. That's how teams end up with barren systems like the Phillies of the past couple years. Hal Steinbrenner has demonstrated that, like it or not, he's only going to spend so much on the Yankees' payroll. To field a competitive team, the Yankees do need some young talent to seep through.

No, Judge, Severino, and friends are not locks to be productive big leaguers at all. Regardless, everything about the trade deadline seems to be dealing in the uncertainty of the word "might." Cole Hamels or an infielder like the now-unavailable Ben Zobrist might be enough to push the Yankees over the top in the postseason for their 28th World Series title. Aaron Judge might become a 20-homer regular, and Luis Severino might become a rotation mainstay. Nothing is clear. Better prospects than them have failed, and it's certainly possible that they flounder. Better rotations than one with Hamels have failed in the playoffs due to October's random nature (coincidentally, the 2011 Phillies), better infields than one with a Zobrist-like player have also fallen short of even making the World Series (the '99 Mets were certainly damn skippy), and better pitchers than Hamels have also suddenly seen their careers derailed by ineffectiveness around his age.

It all comes down to a question of which "might" Cashman wants to trust and what the potential cost would be of improving the 2015 team. Although Severino has a delivery that might eventually land him in the bullpen, he hasn't broken down yet, and all of their other starting prospects seem to be falling prey to Tommy John or mysterious disappearances. Losing him means there is no other obvious hope for future rotation help unless one is a big believer in lesser starting prospects like Bryan Mitchell or Brady Lail. Likewise, there are some flaws in Judge's game that could be exposed, but what if they don't and the Yankees just gave away a cheap, productive young player for a player who might not help them improve that much in 2015 anyway? There is risk abound.

If the Yankees do decide to trade one of these top prospects for Hamels, I will obviously support them and hope that they get it done in 2015. Prospects are not reliable, but sooner or later, the Yankees are going to have to roll the dice on them actually becoming useful major leaguers. While some are expendable, they can't just trade all the prospects. It's a gamble on both sides, and it's one that's difficult to justify.