Is Jacoby Ellsbury slowing down?

Share All sharing options for: Is Jacoby Ellsbury slowing down?

Since breaking in with the Red Sox in 2007, Jacoby Ellsbury has been widely regarded as one of the game's better defensive center fielders -- he took home the Gold Glove Award in 2011. Not only did Ellsbury's defense not pass the eye test, but it also rated extremely well by advanced defensive metrics. Or at least he did until 2014. Here's a look at Ellsbury's UZR numbers since 2011, when he began playing center field exclusively. 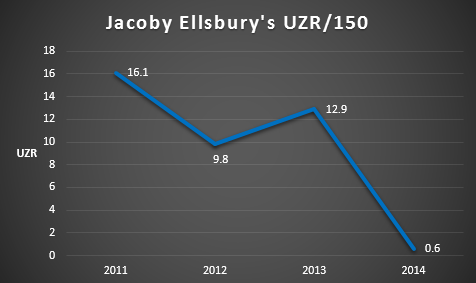 To the untrained eye, this looks like Ellsbury lost a step or three between 2013 and 2014; but if you're familiar with the volatility of defensive metrics, you know it's not that simple. Stats like UZR can be tricky in small sample sizes, and the samples are always smaller than we'd like them to be. So in reality, Ellsbury's UZR trajectory tells us that his defense probably took a step back in 2014, but we can't say say that with any certainty.

It's not hard to talk yourself into the idea that Ellsbury's defense may be on the decline. Running speed -- the hallmark of a plus center fielder -- is a skill that peaks in a player's early 20's, if not sooner. And at 31, Ellsbury certainly could have crossed the precipice separating his defensive peak from his decline years. Defense is a young man's game.

But according to Inside Edge evaluators, who judge the catchability of each ball hit in a fielder's general direction, Ellsbury is still significantly better than the average center fielder. He turned fly balls into outs more often than most last year, and did so for batted balls of all degrees of difficulty -- from routine to remote.

Here's a look at all of the plays Ellsbury made last year courtesy of Inside Edge. Each dot represents a play, and they're color-coded by difficulty. Not only did he make countless easy plays, but he also ran down some toughies. There are over a dozen red, orange, and yellow dots mixed in, representing balls that most center fielders couldn't quite get to.

Now let's look at the plays he missed...

There were very few balls hit in Ellsbury's direction that he wasn't able to run down. Most of those that did drop in were either impossible or near-impossible plays. Even Willie Mays in his prime wouldn't have gotten to the grey dots, and probably would have missed some of the red ones as well. Ellsbury only missed one play that is made over 60% of the time according to the Inside Edge evaluators. Here's a look at that play.

Ellsbury flat out lost track of that one, which can happen to best of 'em every now and again. I'm not trying to make excuses for Ellsbury -- the bottom line is that he missed a very catchable fly ball -- but it's not like he missed it because he couldn't track it down. That play was something of a fluke, rather than an instance of him loosing the speed to play center field.

So the data seem to suggest that Ellsbury's lost very little -- if anything -- on defense; and even if he has slowed down a bit, there's no denying that he's still fast. I took a stopwatch to a play from late in 2014 where he was running full bore down the line to beat out a double play. I clocked him at 3.95 seconds from home to first, which equates to a 75 on the 20-80 scale. If that's not elite speed, its pretty darn close. Ellsbury still has six years left on his contract with an option for a seventh. More likely than not, he won't be the Yankees' center fielder for all six of those years. Even the game's fastest players don't stay fast forever, and the Yankees are bound to find an outfielder who will push Ellsbury to left field four or five years down the road. For now though, Ellsbury is still more than adequate in center field, and if his running speed continues to decline as gently as it has, that's not going to change anytime soon.