Off season free agent signings Carlos Beltran and Brian McCann both had disappointing seasons in 2014. Will they bounce back in 2015?

The Yankees offense has been among the worst in baseball in 2014. Among American League teams, they're dead last in runs scored, and have managed to score fewer runs than 11 National League teams as well. It wasn't supposed to be this way, though, as the team's run-scoring potential actually looked pretty promising heading into the year. Holdovers Brett Gardner and Alfonso Soriano were coming off of very good seasons, while Mark Teixeira and Derek Jeter both looked like strong rebound candidates. Throw in newcomers Jacoby Ellsbury, Carlos Beltran, and Brian McCann, and it was easy to envision the Yankees running out a lineup with seven or eight above-average hitters. That never came to be, of course. Soriano fell flat on his face, Jeter and Teixeira were nowhere close to their 2012 selves, and most disappointing of all, Beltran and McCann both took giant steps backwards at the plate. With wRC+'s of 96 and 93 respectively, that duo will likely undershoot last year's marks by some 20 or 30 points.

When a team signs a veteran to a multi-year contract, the expectation is that he'll be very good early on in the deal, but something close to useless by the time the final year rolls around. The Yankees have a few living, breathing examples of this phenomenon in Teixeira, Alex Rodriguez, and CC Sabathia. But McCann and Beltran seemingly missed the memo about providing value up front. Despite their long track records of excellent hitting, they've combined for just 1.7 fWAR this year. With a combined salary of $32M, that works out to about $16M per WAR. Yuck.

Injuries were at least part of the problem. Beltran's been playing with a bone spur in his elbow for the majority of the season, McCann dealt with foot soreness over the summer, and both players missed time with concussions.  These maladies almost certainly played a role in their underwhelming performances, but as we've seen with Jeter and Teixeira, a return to form is far from guaranteed when you're a thirty-something player coming off of injury.

So just how likely is it that a player turns things around after such a dismal season? To get some sense, I looked at all instances since 1990 where a player's wRC+ dropped by 30-40 points from one year to the next (minimum 400 PA's in both seasons), and looked at how they performed the following season. Among the 206 such players, there were obviously a wide range of outcomes. Some, like Beltran after his first year with the Mets, returned to be better than ever, while others continued trending in the wrong direction -- like Chase Headley has since his monster 2012 campaign. Overall, this group's performance improved, albeit only slightly: They improved by an average of seven and a median of ten points of wRC+.

Taking age into account, we see a much more dismal picture for Beltran, who turns 38 next April. Players McCann's age (30) and younger generally bounce back from unexpectedly poor seasons, but the odds aren't as good for older hitters. Beltran and McCann are represented by the vertical green lines below, while the blue line represents a player's expected improvement in wRC+. 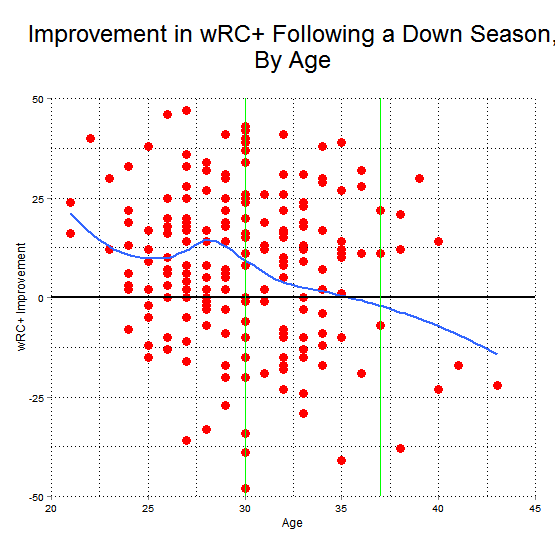 Based on the above regression line, McCann should be expected to recover about nine points from his wRC+, while Beltran would lose another two. This isn't to say that a huge rebound for either (or both!) isn't possible -- its certainly happened before -- but for players like this, a return to form is the exception rather than the expectation. For what its worth, the projection systems are still somewhat optimistic about these guys. The rest-of-season Steamer and ZiPS projections foresee something like a 110 wRC+ for McCann and a 116 mark for Beltran -- 14 and ten points higher than their current marks. Keep in mind, though, that these projections don't know that Beltran will be coming off elbow surgery next year.

Odds are, neither Beltran nor McCann will ever match their 2013 performances again. But the success of future Yankee teams hinges on them having some sort of rebound. Excluding this season, they have some $98M tied up in those two players and neither is going away anytime soon. McCann's still young enough that a much-better 2015 campaign seems likely, if not probable; but the outlook isn't quite as rosy for Beltran. A return to productivity is certainly possible for the soon-to-be 38-year-old, but his age and lack of defensive ability mean the odds are stacked against him.

All statistics courtesy of Fangraphs.