Why did the Yankees keep Derek Jeter at shortstop?

Derek Jeter's been a sub-par defensive shortstop for a while now, and has been especially bad in recent years. Should the Yankees have moved him to another, less premium, position?

Share All sharing options for: Why did the Yankees keep Derek Jeter at shortstop?

It's no secret that Derek Jeter's not much of a defender these days. The wear and tear from playing shortstop everyday for the last 20+ years has done a number on the 40-year-old's mobility. And while he fields just about everything hit directly at him, his glacial range makes him one of the worst defensive shortstops in baseball, according to advanced fielding metrics. A little more than one in every six balls in play are hit to the shortstop's part of the field, making it one of the worst places to hide someone with such limited mobility. However, Jeter continues to man shortstop everyday because...well because he's Derek Jeter. And some would argue that moving him off of his signature position would be tantamount to a slap in the face, especially during his farewell tour.

Simply put, Jeter's not going anywhere at this point. If the Yankees were to make a change, the PR fallout would far outweigh the added benefit of a few runs saved over the last few weeks of the season. Poor defense is nothing new for Jeter. The cap'n hasn't always been as porous as he is today, but his D has never earned much praise from advanced metrics. Per Fangraphs, he's been worth a whopping 145 runs worse than the average shortstop over the course of his career. Many would argue–correctly–that these stats may not be a perfect representation of Jeter's true defensive talent. Publicly-available defensive stats are imprecise measurements that can be wildly inaccurate in single-season samples and shouldn't be considered gospel, especially for seasons prior to 2002, when batted ball data first became available. Still, it's probably safe to say that, even in his prime, Jeter's defense was average at best -- and probably closer to poor. At some point, the Yankees should have seriously considered another defensive home for Jeter, where his lack of range wouldn't have have been as much of a detriment to the club.

Jeter broke into the majors for good as a 21-year-old in 1996, and the Yankees rattled off four World Series titles in the next five years–all with Jeter manning short. It's hard to fault the Yankees for not messing with something that was working, but maybe they should have been starting to think about it. Jeter's bat was a key cog in the Yankees' lineup during the dynasty era, but he gave much of that value back on the other side of the ball. His offense was worth 163 runs above average from 1996-2001, but he was 66 runs worse than the average shortstop. After adjusting for position, that made him roughly 20 runs worse than the average fielder.

It's hard to say how heavily the Yankees front office weighed defensive metrics at this point, or if they even considered them at all. This was right around the time of the Moneyball movement and before advanced statistics became widely accepted across baseball. Whether or not the Yankees were aware of it, the statistical evidence against Jeter's defense was starting to pile up. Still, they continued to run him out there through the early aughts, and he continued to play a below-average shortstop. In fairness, there weren't any obvious landing spots for the Jeter during this span. Most erstwhile shortstops end up at either second or third base, and the Yankees were pretty well situated at those positions. At second, they had a budding star in Alfonso Soriano, while the hot corner was manned by the likes of Scott Brosius, Robin Ventura, and Aaron Boone. Perhaps they could have shifted Jeter over to third base following Brosius' retirement in 2001, but that would have necessitated bringing on another shortstop, and the free agent crop of shortstops was pretty thin that offseason. There just weren't a ton of other shortstops to be had at that point.

Then came the 2003-2004 offseason. Jeter was fresh off of his fifth consecutive below-average season at short. Meanwhile, the Yankees had an opening at third base following a season-ending injury to Aaron Boone in January. To fill the gap, they swung a trade for then-shortstop Alex Rodriguez. If there was ever a good time to move Jeter to a non-shortstop position, this was probably it. Jeter had a track record of poor defense, and at 30, had reached the point where his defensive skills were likely to fall off a cliff. Most importantly, the Yankees had a far superior defensive shortstop on the roster and an opening at third base (and second base since they traded Alfonso Soriano for A-Rod). Of course, the Yankees didn't go that route, opting instead to move A-Rod to a new position.

We all remember how great of a hitter A-Rod was in his prime, but, believe it or not, he was also a pretty slick fielder back in the day. Per UZR, A-Rod was the best shortstop in baseball from 2002-2003, putting up an impressive +24 UZR --leaps and bounds better than Jeter's -4 mark. On defense alone, A-Rod was worth something like two wins more than Jeter before he made the switch to the hot corner. 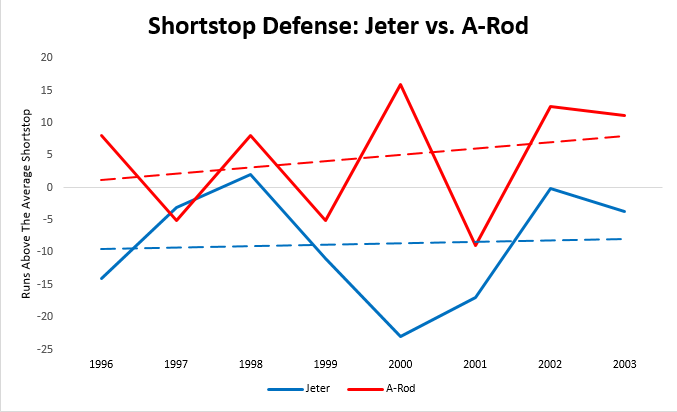 Based purely on the numbers, it seems silly that the Yankees moved A-Rod to third in deference to Jeter. They had two shortstops -- one great and one poor -- and they opted to have ~25% more balls hit to the poor one. Of course, it wasn't exactly that simple. No matter what the data said, "replacing" Jeter with A-Rod would have been a PR nightmare. Essentially, they would have been signaling that they had found a player better than their newly-minted captain. The Yankees' hands were tied.

Following the 2004 season, there wasn't really another obvious opportunity to move Jeter from his signature position, at least not without dramatically shaking up the roster. A-Rod was entrenched at third base for the next eternity, and Robinson Cano cemented himself as the team's second baseman of the future when he hit .342 as a 23-year-old in 2006. So Jeter remained at short, consistently gracing the bottom third of UZR leaderboards year-after-year.

Given the circumstances, its easy to see why the Yankees never shifted Jeter to another position. His obvious landing spots were adequately filled through most of his Yankee tenure, and when there was an opening, making that switch would have sparked a controversy that they, understandably, chose to avoid. But given Jeter's play over the past couple of years, you have to figure they wish they had given it more thought.

Jeter may have been a pretty lousy shortstop, but he was obviously still an excellent player. And all things considered, wasn't even a terrible defensive player. He was just miscast as a shortstop, which happens to be one of the most difficult positions on the diamond. As Jeff Sullivan of Fangraphs put it, "Jeter’s like the worst beer from an excellent brewery". All told, Jeter's been worth a remarkable 74 fWAR over his career. That's good for 45th all-time, and is more than enough to justify his Hall of Fame induction six years from now, even before considering his postseason overtures. Yet as great as Derek Jeter's been, its hard not to think the Yankees could have added a few more wins to their ledger if their captain hadn't been shoehorned into a position slightly above his defensive skill level.