Will Hiroki Kuroda's performance tail off again this year?

Hiroki Kuroda fell apart down the stretch last year. Many blamed it on age, but the underlying numbers suggest it may have been nothing more than bad luck.

Share All sharing options for: Will Hiroki Kuroda's performance tail off again this year?

Hiroki Kuroda's been a godsend for the Yankees over the last month or so. While the rest of the rotation's been in turmoil, Kuroda's pitched to a 3.26 ERA in his last eight starts and has lasted at least six innings in all but one of them. Such stamina has gone a long way towards helping the Yankees rest their bullpen -- namely Dellin Betances and Adam Warren -- who have been overworked of late thanks to the ineffectiveness and lack of stamina from Vidal Nuno and Chase Whitley.Overall, Kuroda's pitched pretty well this year. He holds a 4.08 ERA on the year, making him one of the better pitchers in baseball. But many are concerned that Kuroda's performance may soon hit a wall, similar to what happened last season when he spun a dismal 6.58 ERA from mid-August on. His breakdown was largely attributed to the fact that -- at 38 years old -- he was unable to hold up over 30+ starts. Well, this time around he's 39, so if that was the case, we have little reason not to expect more of the same last year. But taking a deeper dive into his stat line, I'm not so sure that's what actually happened last year.In terms of strikeouts, walks, and batted ball tendencies, not a heck of a lot changed for Kuroda between the first and the second halves. In fact, his SIERA -- an estimate of what his ERA should have been -- barely even budged.

His velocity didn't drop off either:

Basically, the things Kuroda had the most control over remained unchanged. Most of his struggles were driven by an inflated BABIP and home run to fly ball rate -- things that a pitcher has little control over and tend to be fluke in small samples. Flukey or not, these stats can certainly be influenced by how a pitcher pitches. If he's missing his spots and throwing the ball right down the middle, any given batted ball is likely to be hit harder, making it more likely to drop in or leave the park. That doesn't seem to be what happened with Kuroda -- at least not to any extreme degree. His pitch locations in his final eight starts were more or less on par with what they were in his first 24. 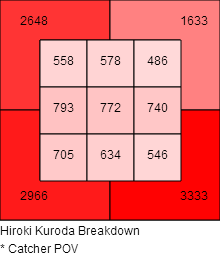 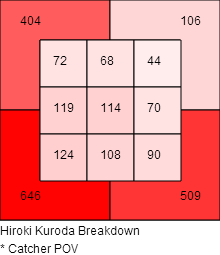 There's not a ton of evidence that Kuroda's late-season performance was the result of anything more than bad luck. That's not to say the Yankees shouldn't tread lightly with his workload. He's 39 years old after all, and has thrown over 100 pitches in each of his last three starts -- something he's not normally asked to do -- so it may be wise to ease up a little. Kuroda's old, which puts him at a greater-than-normal risk to succumb to injury or ineffectiveness; but I'm not putting much weight on his 6+ ERA from last fall: It looks more like a statistical outlier than something that will happen again.