Anatomy of an At-Bat: Jacoby Ellsbury vs. Aroldis Chapman and the improbable hit

Share All sharing options for: Anatomy of an At-Bat: Jacoby Ellsbury vs. Aroldis Chapman and the improbable hit

Although the Yankees already had the series victory in hand entering yesterday's matinee against the Cincinnati Reds, it felt like a game they had to win. They had received brilliant pitching from Hiroki Kuroda and handed the ball to Dellin Betances with the lead. For the 2014 Yankees, that strategy of trusting Dellin has been almost unbeatable, so it felt like the win was in the bag. Todd Frazier's stunning solo home run against Betances threw the seemingly secure game into disarray, and suddenly, the Yankees found themselves in a bottom of the ninth scenario facing dominant Reds closer Aroldis Chapman in a tie game.

They had already used both Betances and David Robertson, and Shawn Kelley threw over 20 pitches the day before, so the outcome of the game was going to be dependent on the weaker part of their bullpen if they did not score. So again, even though they would have had the series victory regardless, it would have been a crushing loss to drop the finale. Fortunately, the Yankees sent Jacoby Ellsbury up to bat to lead off the ninth, and he responded with arguably the team's best at-bat of the season.

1) The aforementioned scenario of entrusting an extra innings game to shaky middle relief.
2) The flamethrowing southpaw Chapman is even more brutal against lefties like Ellsbury than righties. Prior to yesterday's game, they were 22-for-208 against him in his four-year career, a dismal .106 batting average with minimal power (.135 slugging percentage). Basically, Chapman turned lefties into an even worse version of Randy Johnson with a bat (Johnson was .125/.153/.152 with a -22 OPS+ in his career at the plate).
3) Chapman has a preposterous 0.50 FIP in 2014 with an equally ridiculous 18.3 K/9. Only nine of 21 lefties had even made contact against him this year.
4) All nine pitches to Ellsbury were clocked at a minimum of 100.8 mph. As Paul O'Neill remarked on the YES telecast, it is extremely difficult for lefties to pick up the location of a ball going so fast while also coming from an unorthodox windup, and to decide whether or not to swing.

The odds were stacked against Ellsbury, and yet he ended up sparking the eventual game-winning rally. How did he do it?

As previously noted, all nine of Chapman's pitches were 100+ mph heaters, and he wasn't screwing around to start the at-bat. The first pitch was a 100.9 mph fastball that was a tad high, and Ellsbury got the early advantage in the count.

Chapman's next pitch was near the heart of the plate, but when the pitches are over 100, even those are damn difficult to catch up to. Ellsbury could only foul it back. Strike one.

Another blazer toward the middle, and again, it's a challenge for Ellsbury to handle it, even though the location barely changed: 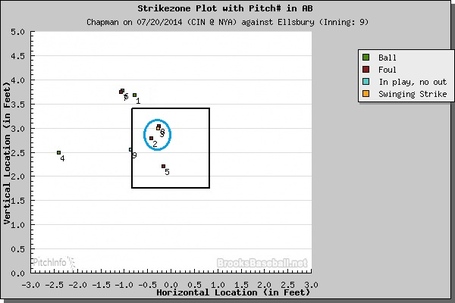 Strike two. Chapman now has Ellsbury right where he wants him and the Yankees appear to be destined for an uninspiring start to the ninth.

Chapman's fourth pitch is by far his fastest at a crazy 103.2 mph. It's nowhere close to the plate though, and Ellsbury takes it for ball two.

The fifth pitch is low in the strike zone and Ellsbury reacts quickly to foul it off.

Reds catcher Brayan Pena is a very good pitch framer, and according to Baseball Prospectus, his Framing Runs per 7,000 is 28.5, even better than the acclaimed Brian McCann's 26.3. His soft hands are on display here when he tries to ease a slightly high 102.1 mph pitch from Chapman into the strike zone for a called strike three. It's a tough take by Ellsbury too, as it can be tempting to try to fight off the pitch to stay alive. He decides to take it though, and Angel Hernandez actually comes up with a good call here: ball three. The count is full, and Chapman doesn't want to issue a leadoff walk, especially with a baserunner as smart and speedy as Ellsbury.

Right, it's hard to lay off that pitch so close to the strike zone, and Ellsbury offered a classic "emergency hack" to foul it off. Pitch seven is almost identical to pitch six, save for a tick slower on the radar gun at 100.9: 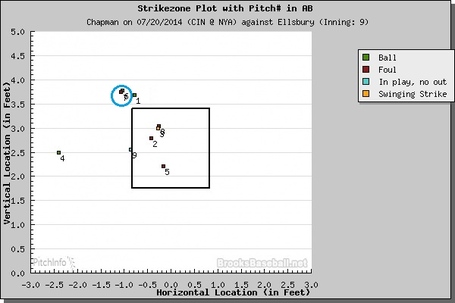 Chapman returns to the strike zone with a 101.8 mph heater in pitch eight, and Ellsbury doesn't miss it by much. Sitting at home, Alfonso Soriano ponders how an at-bat could possibly go on for this long. He spies some guacamole on the table and reaches for it from his chair.

Vernon Wells tweets about it.

Chapman nails the inside part of the plate, but Ellsbury, who moved a hair back in the batter's box, is now able to center it and he smokes a grounder the opposite way through the left side for a base hit, his fourth of the day. He is only the 21st lefthanded hitter to ever get a hit against Chapman in 235 regular season games.

A stolen base, a wild pitch, an out, and a sun-aided pop-up single later, McCann becomes the 22nd with the game-winning hit, but everyone knows who the real hero is.

From this analysis, I can conclude that Jacoby Ellsbury is good at baseball. #HotTakesOnHotDays. Now would someone please clean up the guac, because Wells isn't helping.