Vidal Nuno is not good at anything

Share All sharing options for: Vidal Nuno is not good at anything

Vidal Nuno is terrible, but you didn't need me to tell you this. What you might need me to tell you is just how freaking bad he actually has been. On the season, Nuno has a 5.90 ERA and 5.17 FIP, which is the third and sixth worst among all pitchers with at least 60 innings pitched. That's not surprising from a junkballing, slow-pitch lefty who spent time in indy ball, but you might imagine that there has to be something he's kind of decent at that might be getting drowned out.

Perhaps the only thing he does well is strike out lefties and not walk too many righties. Those are pretty good numbers. If he did that even against the same handed batter he'd actually be useful in some capacity. If he could do all that against lefties then he'd be a LOOGY, but he can't strikeout righties and he can't stop walking lefties, so he's pretty useless. How do you even manage this? 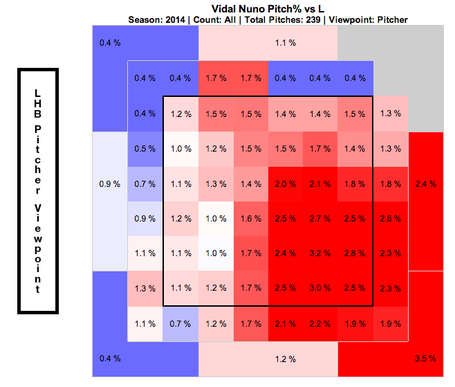 Nuno keeps the ball down and away against lefties. He can get batters to reach for a ball and strikeout, but if that doesn't work, he's not going to throw a lot of strikes. Instead of catching the plate, he's throwing it out of the zone and losing more than his fair share of batters. 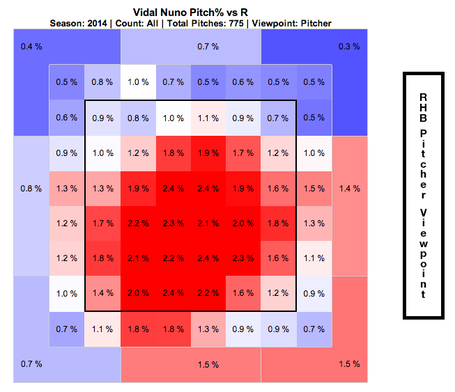 Against right-handed hitters he's chucking it directly down the middle. Like, right there, for everyone to see and anyone to hit. He can't throw it to the outside corner,like he does against lefties, and clearly doesn't want to throw it in for a right-handed power hitter to turn on or get hit. What he ends up throwing then is a very, very ugly pitch that's going to go very far. It makes perfect sense why he's given up 10 (!) home runs against righties. Yuck.

He doesn't have a single valuable pitch as everything from his fastball, slider, curveball, cutter, kitchen sink, is below average. Nothing he throws is worth a thing; his slider is actually the sixth worst in baseball. It's pretty bad.

Obviously, he's really bad and the only reason he's still in the rotation is because they're stuck with him, but it wouldn't take much to find an improvement. Chances are, any DFA candidate is going to do something decent, while Nuno can't do a thing. Bryan Mitchell and Shane Greene aren't pitching very well this year, but I have to imagine that one of them will do enough good to be better than what Nuno has done this season. I mean, you can't get much worse than what we've already seen. At least I hope not.