With declining velocity, Hiroki Kuroda is trying to make adjustments

Kuroda's velocity has progressively dropped the past two years, causing him to alter his pitch selection and hone his command as his margin for error has decreased. With his recent troubles, he may have to do it again.

Share All sharing options for: With declining velocity, Hiroki Kuroda is trying to make adjustments

Hiroki Kuroda is constantly evolving as a pitcher. With the Los Angeles Dodgers in his debut year, Kuroda was primarily a fastball-oriented pitcher; he then would work with his slider and splitter as complimentary pitches. In 2008, he threw 1663 fastballs. In 2013, however, we found a whole new pitcher before us, one that was somehow better. As his fastball decreased in velocity, Kuroda relied more and more heavily on his sinker (1315 of them), a pitch he only threw 45 times in 2008. This velocity drop has been across the board, as one can see from this chart from Baseball Savant: 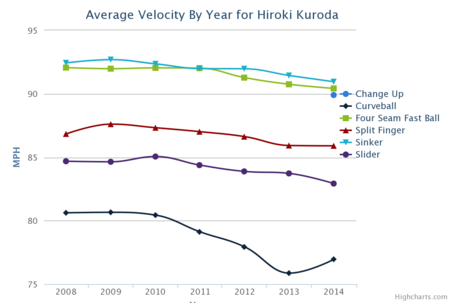 With that velocity drop comes what usually happens with most pitchers--a loss in run value. In 2008, batters had an 89 wRC+ off his fastball. In 2012? 98 wRC+. So he's mostly abandoned the four-seam fastball going into this season--he now only throws it 2.7% of the time as opposed to 8.1% last year. Kuroda now primarily throws his sinker and splitter, a duo that makes up 71.3% of his pitch selection this year. However, even though he's been using pitches with more movement, that doesn't mean his adjustment is complete. Just like with his fastball, his sinker has dropped in velocity. In 2010 Kuroda threw a maximum of 96.9 mph with a mean of 91.7; now it is just 94.6 and 90.9, respectively.  While this is certainly still respectable, Kuroda is now trying to learn to pitch with even less of a margin for error than he is used to. The biggest problem he has faced is with left-handed batters. The following is a heat map from FanGraphs depicting the runs above average for each zone in 2013: 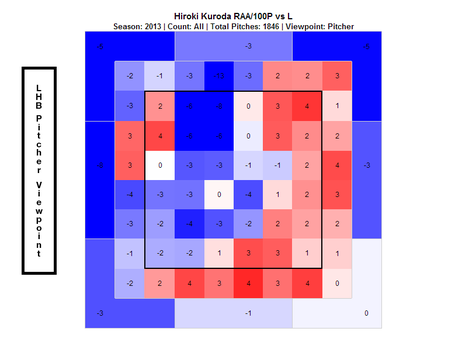 That clearly shows that Kuroda was quite effective working left-handed batters down and away, as well as minimizing damage up and in. That is completely different from what see in 2014: 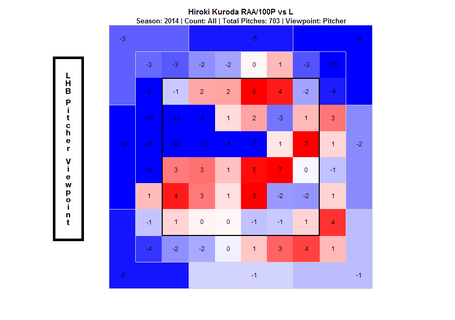 As you can plainly see, Kuroda is clearly less effective where he has traditionally been--low and away--and he has been absolutely hammered up and in. Why would this be? According to movement readings via PitchF/X, Kuroda's sinker has exhibited the same movement (nearly) as he had in 2013, but as I mentioned before, the velocity has dropped. That means that even when Kuroda's location is on, it could still be slightly off. His margin of error is smaller, and spots he thought would be effective are no longer so.

It's not as if he hasn't been struggling more against right-handers as well, but the change in left-handers is so much more profound as opposing managers try to stack their lefties against him. In terms of FIP, his mark has jumped from 2.97 to 3.30 against righties and from 4.02 to 4.49 against lefties between 2013 and 2014. And when you primarily throw the sinker, the change in velocity is showing up in his results, as one can see from the corresponding batting against his sinker:

So what is the solution to this? Well, I think it's time for Kuroda to make some more adjustments. The sinker has been a pitch that he has now supplanted his fastball with, but just as with the fastball, the sinker is steadily declining in effectiveness. As his velocity continues to drop, the sinker is, and will, become more increasingly difficult to spot, especially against left-handed batters.

Hiroki Kuroda has certainly struggled this year a bit more than we are used to, but he has shown in the past that he is willing to make adjustments. Over the past six years, he has altered his pitch selection and repertoire a numerous amount of times so that he can adapt as a pitcher. It worked as he transitioned from NPB to MLB, and it worked when he moved from the Dodgers to the Yankees. Declining velocity has always been in his mind as he has adjusted, and there's no reason why he can't adjust to become dominant once again.