Adam Warren might be more effective as a one-inning pitcher

Adam Warren's been excellent this year, but he's struggled when asked to throw 25+ pitches. PITCHf/x suggests this isn't a fluke.

Adam Warren has been one of the pleasant surprises of the 2014 Yankees. By compiling a 1.55 ERA over 29 innings in relief, the 26-year-old has emerged as a reliable, late-inning option. No doubt, Warren's been excellent this year, but he hasn't been completely untouchable, especially when asked to provide multiple innings of work. When Warren's passed the 25-pitch mark, opposing batters are 7-for-12 (.583), including a home run to Sean Rodriguez -- the only one allowed by Warren on the season. This is obviously a tiny sample, but that performance is pretty shocking considering how dominant Warren's been otherwise. On the surface at least, it certainly looks like he becomes less effective once he gets up there in pitches.

Warren's release points also suggest that fatigue is a factor for him. As he treads into deeper pitch counts, his release point begins to change. By the time he hits the 20-pitch mark, he's releasing the ball about two inches closer to his body than when he was fresh. 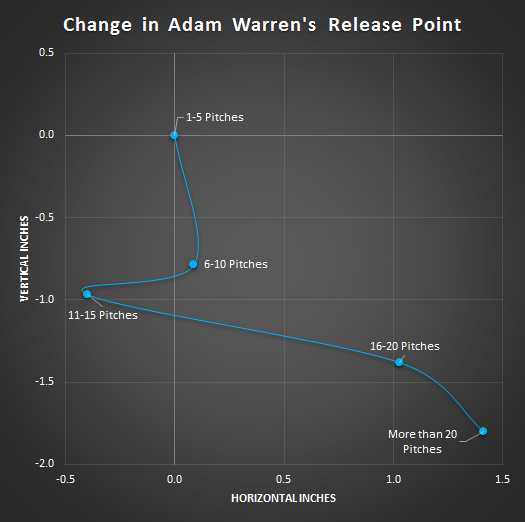 Its not all that unusual for a pitcher's release point to change once he's got a few pitches under his belt, but Warren's deviation is larger than most. Warren's vertical drop of 1.5 inches is especially unique. Of the 254 pitchers represented in the graphic below, only 12 have experienced a more pronounced vertical drop between pitches 1-5 and pitches 20+ this year: 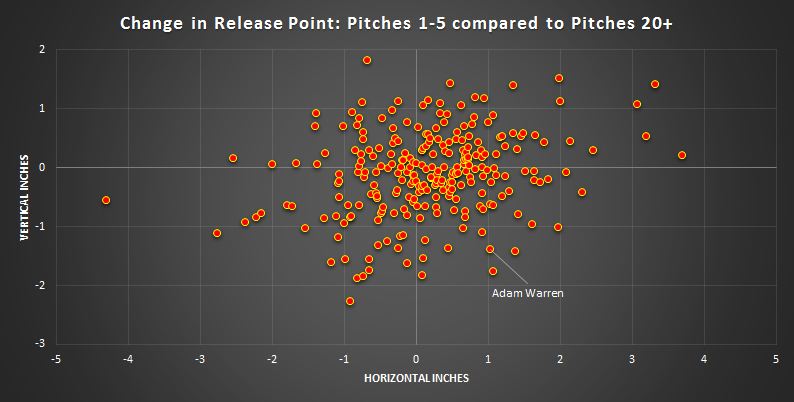 So clearly, Warren's release point starts to slip after he's thrown a few pitches. In general, it is preferable to have a pitcher capable of consistently repeating his delivery. However, judging by his release points, it doesn't seem like Warren's able to do this very well, which might explain why he was never a great starter in the minors despite having more than adequate stuff.

At any rate, it probably makes sense to use Warren for just one inning at a time whenever possible. This would be better than asking him to struggle through 20+ pitches, which would also render him unavailable for the next day. It's obviously best to utilize him where he's most likely to succeed, and based on what we've seen this year, it seems like he struggles to hit his spots once he's racked up 20-25 pitches.