Should we be worried about Betances' and Warren's workloads?

Both Dellin Betances and Adam Warren are on pace for over 90 relief innings this year. Do these heavy workloads put them at risk for a late-season breakdown?

Share All sharing options for: Should we be worried about Betances' and Warren's workloads?

Heading into the season, it was looking like the bullpen would be a weakness for the Yankees. Despite losing Mariano Rivera and Boone Logan, Brian Cashman and company didn't do much to augment the bullpen this winter, with Matt Thornton -- a lefty specialist -- being the only notable acquisition. Instead, the Bombers chose to rely on their unproven internal options to take on more meaningful innings this season. That decision's paid off handsomely so far, as Dellin Betances and Adam Warren have emerged to form a more-than-adequate bridge to closer David Robertson, combining for a sparkling 1.73 ERA.

As recently converted starters, both pitchers have been often called upon for multiple innings of work. In terms of innings pitched for relievers, Betances and Warren are tied for seventh in the majors with 26 a piece, both on pace for over 90 innings pitched. This might seem alarming to any Yankee fan old enough to remember Paul Quantrill and Scott Proctor. Both were effective relievers from the mid-aughts, whose performances cratered after Joe Torre rode them around 100 innings in relief in a season. The timing sure seemed suspicious, but it's possible that these two are just token examples, rather than signs of an overall trend. So what does this mean for Betances and Warren? Will they eventually break down á la Proctor and Quantrill? History suggests the answer is no...  at least not this year.

Since 2007, there have been 37 pitchers who have thrown at least 30 innings in relief through May -- a threshold that both Betances and Warren are all but certain to reach. For the most part, these pitchers held up well over the remainder of the season. Two of the 37 -- Anthony Bass and Paul Clemens -- stopped pitching due to general ineffectiveness. Neither were very good even when they were accumulating their early season innings and predictably stopped getting chances. Six others went down with injury as the season wore on. They include: Blaine Boyer (shoulder fatigue), Franquelis Osoria (ankle inflammation), Chris Sampson (shoulder spasms), Manny Corpas (Tommy John Surgery), Logan Ondrusek (forearm strain), and Chad Gaudin (elbow contusion; carpel tunnel syndrome). The fact that six of these pitchers got hurt is concerning, but it's not clear that their injuries were caused by over use. Pitchers get hurt all the time, and 6/37 (16%) certainly isn't an alarmingly high ratio.

Excluding the guys who went down with injuries or ineffectiveness, this group's ERA  jumped up by an average of 1.05 from June on. Don't be alarmed, though, as this difference can be explained away by selection bias. Many of these pitchers were used so frequently early on because they were so effective at getting batters out, through some combination of skill and luck. Lucky pitchers are over represented in this sample, so a fall back to earth is to be expected. 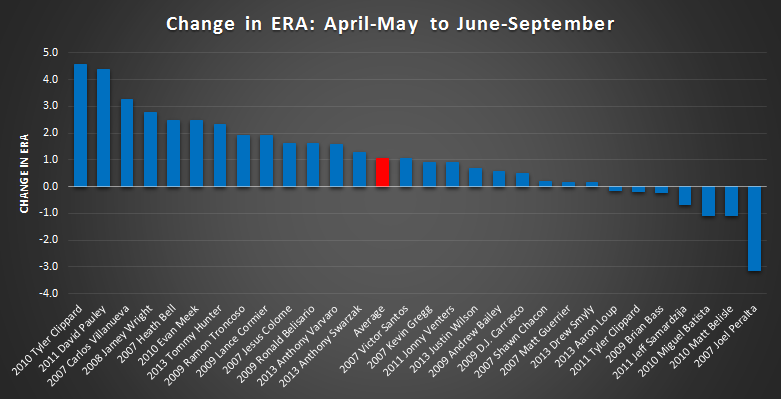 Looking at SIERA, a metric that measures what a pitcher's ERA  should have been if not for luck, there's next to no difference. 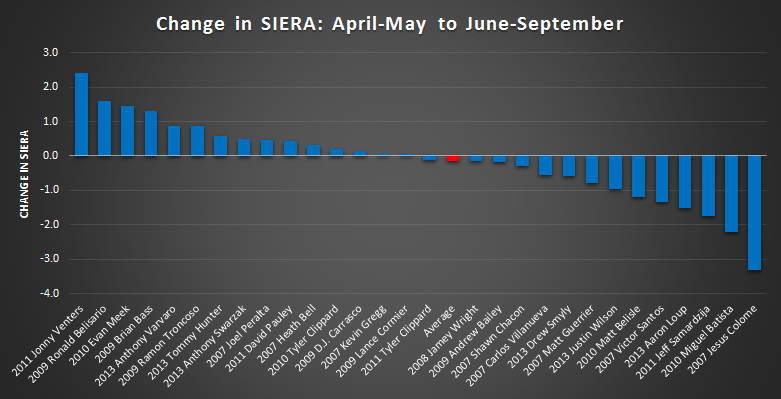 Fastball velocity doesn't seem to budge either. In fact, those who threw lots of innings early on tended to throw a bit harder as the year went on. 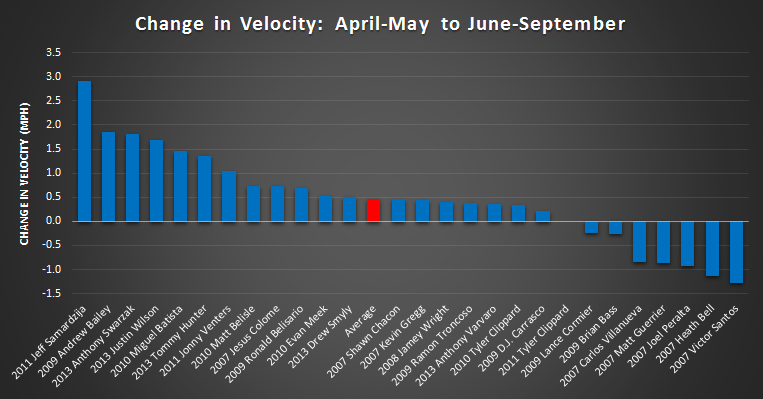 All of this evidence seems to suggest that Betances and Warren are unlikely to falter down the stretch due to their onerous workloads. Still, that's not to say Joe Girardi should run these guys ragged. Harder to quantify are the hangover effects all those innings would have next year and beyond. With several years of team control remaining, both pitchers figure to be key pieces going forward, so Girardi would be wise to tread somewhat carefully with these young arms.

But for now at least, riding Betances and Warren seems like the only option, as aside from Robertson, the rest of the bullpen leaves a lot to be desired. Preston Claiborne's still an unknown commodity, while Alfredo Aceves and Matt Daley have done nothing to merit opportunities in big spots. And with Chase Whitley and Vidal Nuno averaging less than five innings per start, it'll be hard not to call on Betances and Warren for multiple innings at a time -- at least until Shawn Kelley's ready to return. At this rate, it's hard to imagine the duo pitching fewer than 80 innings a piece, assuming they stay healthy. Luckily, the data suggests they should be able to shoulder the load and remain effective once September and October roll around.