Are we underrating Masahiro Tanaka?

Most expect Masahiro Tanaka to be a #3 starter, but the track records of other split-throwing Japanese pitchers suggest he could be better than that.

Share All sharing options for: Are we underrating Masahiro Tanaka?

The general consensus on Japanese import Masahiro Tanaka is that he'll be a solid #2 or #3 starter, but at least a notch or two below ace level. Few think he'll be a truly dominant force in the Yankees' rotation -- not this year, at least. According to a poll of both fans and industry insiders done by Baseball Prospectus, the consensus on Tanaka is that he'll be about as good as Homer Bailey in 2014, who's projected for about 2 or 3 WAR.

The logic behind this conclusion is sound -- as dominant as Tanaka was in the Nippon Baseball League last year, Major League Baseball is a completely different animal. Even Yu Darvish, who was the more dominant pitcher in Japan, didn't immediately set the world on fire when he made the leap in 2012.

To be fair though, Tanaka and Darvish are very different pitchers. Using a deadly fastball/slider combo, Darvish struck out 30% of the hitters he's faced in the majors after fanning 31% in his final year in Japan. Tanaka, on the other hand, does things a little differently. While he does strike out his fair share of batters (21% in Japan last year), his real skill is inducing ground balls -- something he does with his split finger fastball, which has looked all sorts of nasty this spring.

Since 2007, there have been seven Japanese starting pitchers that have made the transition to the MLB. According to PITCHF/X data, two of them relied on a splitter: Hiroki Kuroda has thrown his split 12% of the time, while Hisashi Iwakuma has thrown his 22% of the time -- easily the most of any starting pitcher in the PITCHF/X era. Here's a look at how these seven pitchers' ERA's from Japan have correlated to their MLB ERA's. The pitchers who threw splitters are colored red. The closer to the yellow line, the closer the pitcher came to replicating his NPB ERA in the majors. 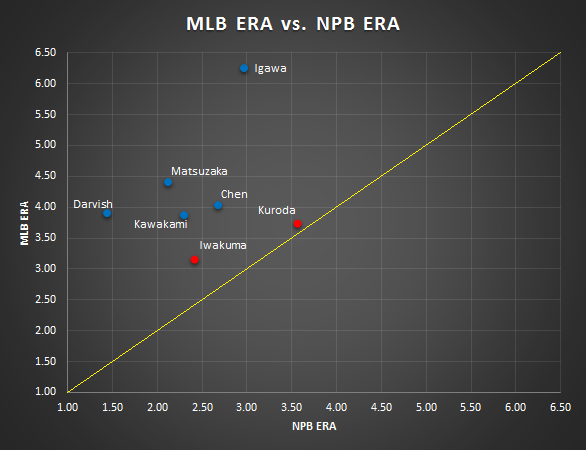 Sure, this is a tiny sample and it would be foolish to make any definitive conclusions based on this data, but the disparity between the groups is interesting. Most of these pitchers posted ERA's significantly higher than they did in Japan, but Kuroda and Iwakuma saw their ERA's tick up by less than a run.

The few split-throwing relievers who have made the transition from Japan have also fared pretty well. Both Koji Uehara and Hideki Okajima enjoyed dominant relief stints in the states. The one exception was Ryota Igarashi, who never stuck in the big leagues, but was also never a top-shelf reliever in Japan.

Tanaka's never squared off against the best hitters in the world on a regular basis, so predicting his performance in the majors is no easy task. Still, I think many are selling him short by labeling him a mid-rotation starter.

The projection systems agree. These systems are far from perfect -- especially when they're asked to extrapolate off of something other than major league numbers, but boy do they love Tanaka. The worst projection I've come across came from Steamer, which still projected him for a 3.76 ERA -- better than both CC Sabathia (3.88) and Kuroda (3.97). Other projections are even more bullish: The Oliver system calls for a sparkling 2.59 ERA, which would easily make him one of the top two or three pitchers in the game.

A 2.59 ERA feels a little too optimistic, but I wouldn't be surprised at all if Tanaka posts an ERA in the low 3's in 2014. Split-throwing pitchers have historically had smooth and successful transitions to American baseball and my money's on Tanaka doing the same this year.