The past, present, and future of pitch framing with the New York Yankees

Share All sharing options for: The Yankees have been ahead of the pitch framing curve for years

Baseball Prospectus recently released the findings of a study to accurately determine a catcher's skill behind the plate. They split these skills into pitch framing and pitch blocking in order to figure out who the best catchers were at the most mysterious part of the game. An advanced study on the merits of pitch framing and catching defense has been the illusive White Whale in the sabermetrics community for years, but I feel they have now come up with the most comprehensive statistic to date. By taking things like the pitch count, call tendencies, umpire bias, and pitcher skill into account, they were able to develop a stat that could help us rethink how we evaluate catchers, both defensively, and as a whole.

They created Framing Runs Earned and Blocking Runs Earned, which can be combined to get the Total Receiving Runs Earned. These numbers can then be put up against 7,000 opportunities (a typical full season for a catcher) in order to convert them into a rate and allow a more even playing field for both full-time and part-time players. What the study seems to have uncovered is that the Yankees have already been on the right track for years and now we can see what they were thinking this whole time.

They were fine with Jorge Posada because of his bat, but as his career ended, the game changed, and their values differed, they brought in Jose Molina, Chris Stewart, and Russell Martin, finally leading us to Brian McCann. It seems that the Yankees have routinely employed some of the best pitch framers in the game. One thing we can probably say about all this is that the Yankees might have actually been ahead of the curve for once: 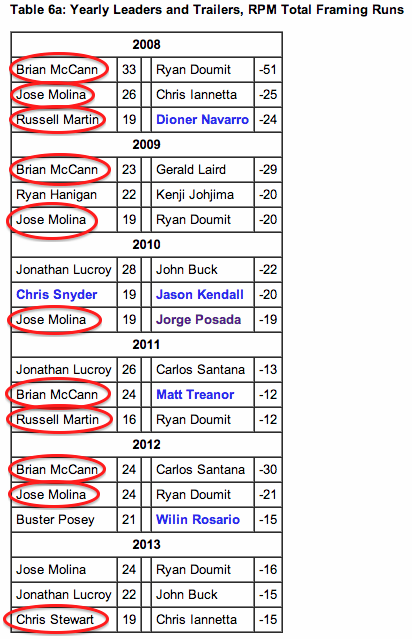 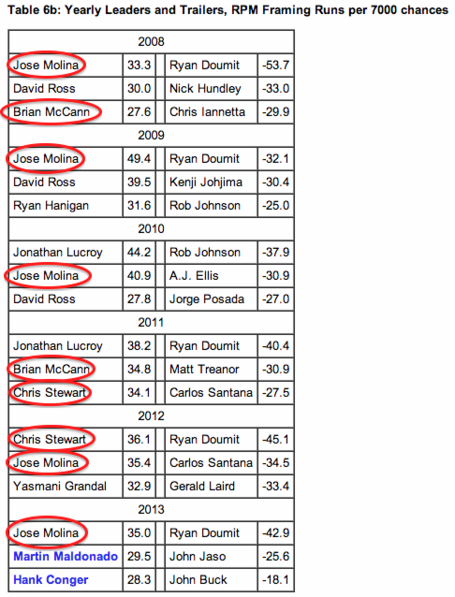 Remember, they let Molina go because of Francisco Cervelli. You'll also note that while Posada was one of the worst framers in 2010, it was also his last season behind the plate. Oh, and look, ex-Yankee prospect Dioner Navarro was pretty bad in 2008. If Jonathan Lucroy was a free agent, you better believe the Yankees would be all over him.

After all the talk of the Yankees being stuck in the past when it comes to free agency and extensions, it's nice to see some forward thinking coming out of the front office.

Their love of pitch framing trickles into their internal options as well. Take a look at the backup catcher battle going on in spring training right now:

Say what you want about his bat, but Cervelli has done a great job behind the plate. There was some talk that he was too aggressive at times, but overall he's been pretty solid at pitch framing and blocking. While this is a very small sample size, Murphy's results in 2013 more or less jibe with scouting reports about him being an excellent game caller and pitch framer, but is still working on his abilities behind the plate. The stick in the mud looks to be Romine, who was ok at framing in 2013, but was not good at blocking pitches in the dirt.

It's hard to say anything definitive about either Murphy or Romine without a larger body of work, but I figured I'd throw it out there for you to see. For this, and many other reasons, Cervelli is still the likely favorite for the backup role, but his defense certainly isn't the game changer that Chris Stewart's (32.5) seems to be (at least for the Yankees).

With McCann, not only did they get one of the best offensive catchers in baseball, which will be a welcomed change after Chris Stewart, but they also have one of the best pitch framers as well. This will only add to his value for the Yankees over the next five years, but it could also change how they approach their prospects.

Many believe that with McCann now in the picture, the Yankees might trade Gary Sanchez. Others believe Sanchez can still fit into the picture in a few years if McCann moves to first base. But seeing what the team values, are they really going to move one of the best defensive catchers in the game for a rookie who might not even be all that good behind the plate? It might make more sense to install Sanchez as the first baseman, and in that case, maybe it would be better to trade their catching prospect before it comes to that. There's obviously no reason to rush now, but as long as everyone stays healthy I just don't know if the Yankees will be willing to trade that defensive ability. Defense behind the plate seems to be important to them and maybe it's not as crazy as we initially thought.

Some of their implementation may not have worked out so well, like Chris Stewart as the starting catcher, but the forward thinking was there. Now that there's a means to quantify a catcher's defensive value, hopefully it won't be too long before we figure out what league-average pitch framing is and how that can be calculated into WAR. I'd like to see how valuable pitch framing is compared to offensive abilities, and whether it's better to have an elite pitch framer with a weak bat or a slugger who can't frame. Then we can finally see if Stewart's glove was worth putting up with for an entire year.