CC Sabathia's fastball velocity and performance have been trending in the wrong direction for three years now. Adding a new pitch might help him buck those trends.

Its been well-documented this spring that CC Sabathia is not throwing as hard as he used to. Over the last three years, CC's watched his average fastball velocity drop from 94 in 2011 down to 91 last year. Sabathia's velocity problem doesn't seem to be getting any better, either, as he's yet to throw a fastball in the 90s this spring.

Yankee fans should be very concerned with this development. Not only is CC no longer throwing hard, but his ERA has also been trending in the wrong direction -- and that's probably not a coincidence. Over the last three years, Sabathia's game-to-game performance has correlated pretty well with how hard he's thrown. His SIERA, a metric that estimates what his ERA should have been, tends to be about 0.25 higher for every MPH lost from his fastball. 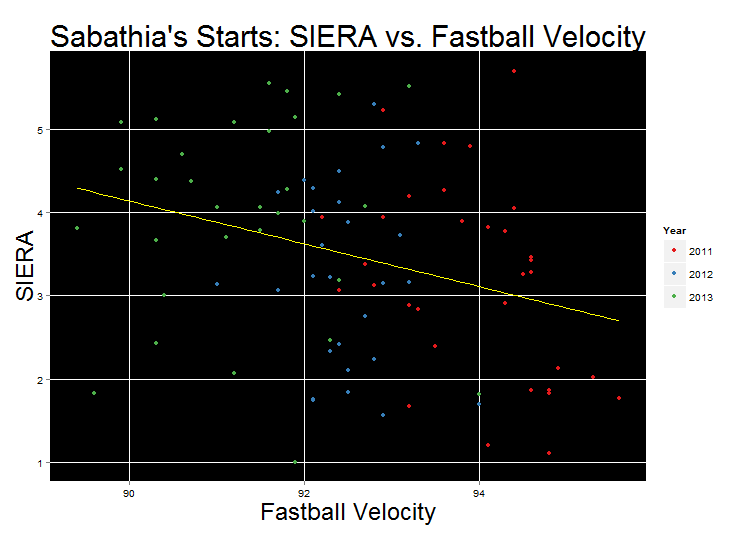 This doesn't bode well for the future, especially if Sabathia's velocity loss continues. If CC continues to sit in the high 80s like he has this spring, the data above makes it seems unlikely that he ever posts another sub-4.00 ERA. In an attempt to buck this trend, Sabathia's somewhat reinventing himself this year by adding a cutter to his arsenal. He's clearly not fooling hitters like he used to, so mixing things up certainly doesn't seem like a bad idea.

So will adding a second fastball be enough to throw hitters off balance and keep them from squaring up on his pitches? That's hard to say. Adding a new pitch is one of those well-worn spring training tropes -- right up there with getting laser eye surgery and being in "best shape of my life" (which might also apply to CC this year). Adding a new pitch certainly sounds good, but it's hard to really know if it really means anything.

To get some sort of idea of how effective a new cutter can be, I looked at all qualified pitchers who went from throwing a cutter less than 1% of the time to more than 5% of the time from one year to the next -- a sample of 21 pitchers. It turns out that pitchers who've added a cutter have improved a little better, dropping their ERAs by 0.30, on average. For comparison, all other pitchers saw their ERAs tick up by about 0.10. Here are the distributions: 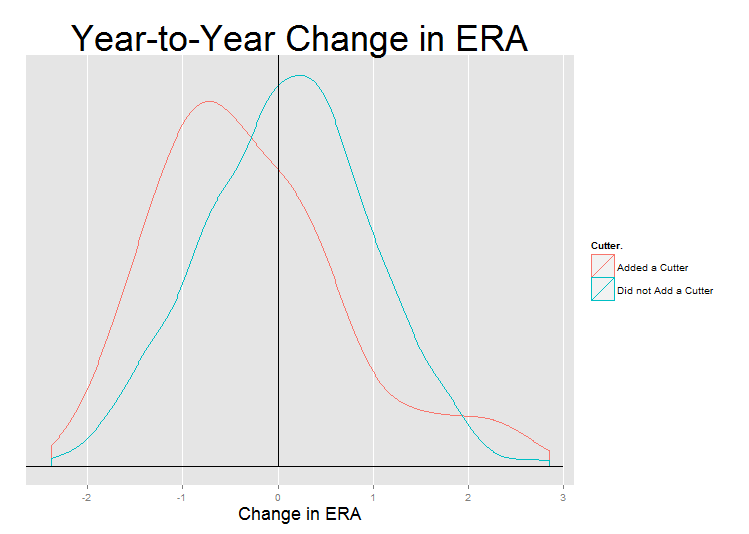 Although the sample size is a little on the small side, this data's encouraging. The numbers show that adding a cutter can be a difference-maker in some cases -- and implies that CC's new pitch could help stave off some of the performance decline we've seen in recent years.

Unfortunately, Sabathia's best years seem to be behind him. He's not an ace anymore and adding a new pitch isn't going to change that. Still, there are plenty of pitchers out there who do very well without ever hitting 90 on the radar gun. Maybe CC can do that too, but it's pretty clear that his old way of doing things just isn't cutting it (no pun intended). CC's at his best when he's throwing hard, so his velocity is definitely something to keep an eye on this year; but even if hard-throwing CC is gone for good, his new toy could at least be enough to make him a solid, mid-rotation starter through the remainder of his contract.