CC Sabathia and his new cutter

CC Sabathia will be featuring a new pitch in 2014: the cutter. He learned it from his pal Andy Pettitte, who could be considered a cutter-guru. But how much will the pitch help the issues that plagued his 2013?

Share All sharing options for: CC Sabathia and his new cutter

Any time a pitcher adds a new option to his arsenal or tinkers with a pitch grip, I'm pretty skeptical of any future benefit. If it was so easy to make such a change, why don't pitchers do so more often? To me, it's especially uninspiring when a pitcher does this after an extended period of difficulty. It seems logical to focus on resolving existing issues, rather than experimenting with a new pitch. Last week, CC Sabathia discussed adding a cutter to his pitch selection. You can tell by now that I don't have much faith in it being very helpful for CC.

Obviously, nobody is expecting this new pitch to be the panacea to Sabathia's poor 2013. There are greater underlying problems, primarily his increased propensity to allow home runs. His strikeout and walk peripherals did take a hit last year, but nonetheless were still pretty decent. It was the long ball that really killed him - he posted career highs in HR/9 and HR/FB. The likely reasons for this are his decreased velocity and command, two issues that a cut-fastball won't settle. He can no longer blow it past hitters with his diminished velocity, making his ability to paint the black increasingly important.

Sabathia's velocity probably isn't coming back, and he's acknowledged that he's prepared to pitch with whatever his left arm has in it. His command, however, is much more likely to bounce back. Should that occur, the home run totals will subside a bit. Knowing this, pitch location should be the primary concern for CC as he prepares for the regular season. Despite the fact that adding a cutter won't hone his command, and my general unenthusiastic opinion about pitch fiddling, if one squints just enough, there are some reasons to hold out hope for the pitch.

In theory, adding some movement to a fastball should make it more difficult for the hitter to square up. That, in turn, would result in fewer hard-hit balls and fewer home runs. Sabathia's fastball got clobbered last year, so perhaps mixing in some cutters could have an ulterior benefit to the four-seamer. Per one-thousand pitches, Sabathia's seen his home run totals jump on all of his pitches but the sinker, so pitch location is obviously much more important for his entire arsenal. Maybe, though, the cutter can play a role in minimizing this weakness in his fastball. 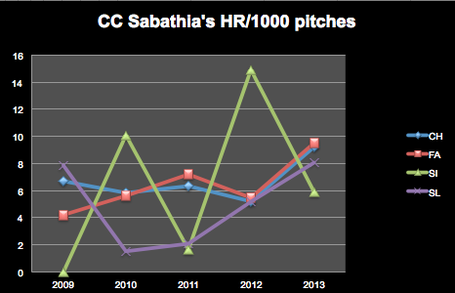 It also doesn't hurt that he's had two pitchers known for their cutters, Mariano Rivera and Andy Pettitte, around him during his tenure in pinstripes. CC attributed learning the pitch from Pettitte, who is in camp as a special instructor this spring. The pitch isn't going to magically work for Sabathia simply because Pettitte taught him the pitch, but it certainly can't be construed as a negative.

Ultimately, don't expect this pitch to amount to much, especially right away. If it was so easy to effectively add a new option to one's repertoire, it would be much more commonplace. The most important thing for Sabathia to combat in 2014 is his gopher-ball woes, which an improvement to his precision would quell. The incorporation of the cutter could help keep the ball in the yard, but location will prove to be paramount to Sabathia's performance.