After eight years on the job, the Yankees fired Kevin Long from his position as the team's hitting coach. How did Yankee hitters perform during his tenure?

Share All sharing options for: A statistical look at Kevin Long's years as Yankees hitting coach

As of this writing, we don't yet know who the Yankees hitting coach will be in 2015. What we do know, however, is that it won't be Kevin Long, who the Yankees fired a couple of weeks ago. The 2015 season will mark the first time the Yankees will have a new hitting coach since way back in 2007, when Long took over for Don Mattingly prior to Joe Torre's last season as manager. Yeah, it's been that long.

In his eight years as Yankee hitting coach, Long presided over some of the most dominant offenses in recent memory. The Bombers scored the most runs in baseball three times (2007, 2009, and 2010) under Long's watch, and only the Red Sox outscored them over that eight-year span. But it wasn't all rainbows and sunshine, as there were a few disappointing seasons mixed in as well. And unfortunately for Long, a couple of them took place in 2013 and 2014. The Yankees offense was among the worst in baseball each of the past two campaigns, which was the biggest reason why the team missed the playoffs in back-to-back seasons for the first time in 20 years.

On the aggregate though, Yankee hitters performed pretty darn well during Long's tenure. Of course, Long's had a solid cast of hitters to work with. Guys like Derek Jeter, Alex Rodriguez, Mark Teixeira, and Hideki Matsui were great hitters before they had anything to do with Long, so it's no surprise that these players continued to hit like All-Stars. Anything less would have been labeled a disappointment. But while most Yankee hitters were already good, many performed even better than expected under Long's tutelage. From 2007-2014, 2,681 major league hitters with pre-season Marcel projections came to the plate at least 200 times in a season. On average, these players under-performed their projected wOBA's by .011 points, but the 80 Yankee hitters fell short by just .005.

You can ignore the fact that both of these wOBA differentials are negative. This is simply a byproduct of the declining offensive environment across baseball. What matters here is that -- relative to projection -- the average Yankee hitter performed about .006 wOBA better than the average non-Yankee. 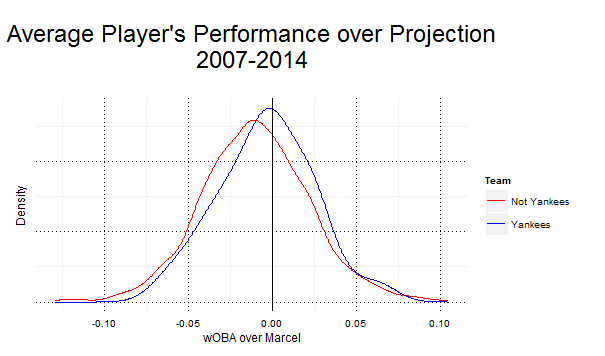 Whether or not Long had anything to do with this differential is up for debate. After all, .006 is a pretty small delta, even over eight years. Either way, Yankee hitters outperforming expectations is something that happened over Long's tenure. Unfortunately, it stopped happening after the 2012 season. 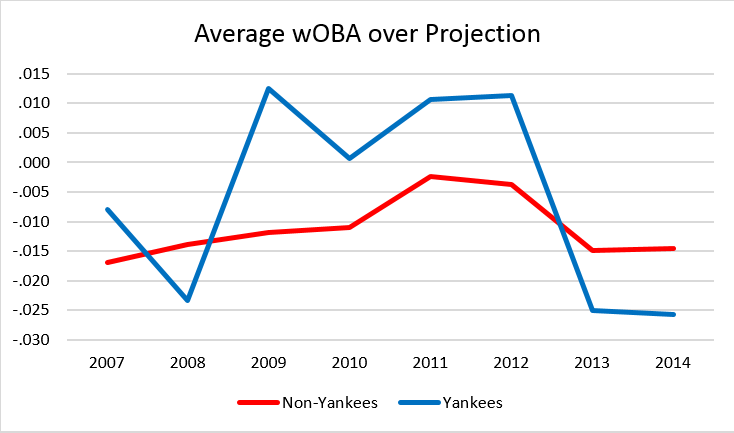 But what was behind this drop-off? Let's take a deeper dive into these players' performances, keeping in mind that linking any of these trends directly to Long is probably a bit of a stretch. The recent Yankees' failure to meet expectations was largely due to two factors: 1) higher than expected strikeouts and 2) lower than expected power output. 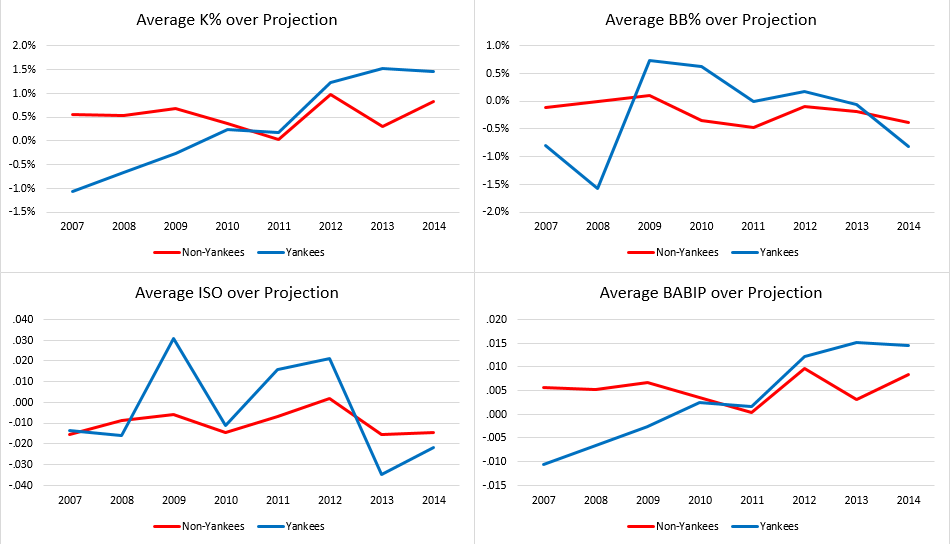 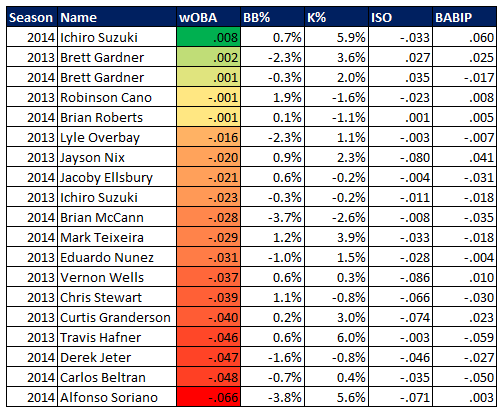 Let's dig a little deeper. FanGraphs uses PITCHf/x data to track how often each player swings at pitches inside of the strike zone (Z-Swing%) and pitches outside of it (O-Swing%). These metrics aren't typically subject to much random variation, so any observed changes would be more likely to be attributable to Long.

Not a heck of a lot going on here. Maybe a few Yankees got a little more aggressive on pitches outside of the zone in 2014, but nothing ground-breaking. And that certainly wasn't the case in 2013, when many more Yankees hitters cut down on their out-of-zone hacks. 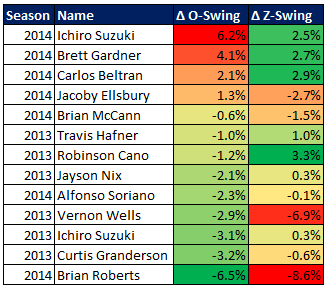 So was it Kevin Long's fault that Curtis Granderson's power evaporated in 2013? Or that Alfonso Soriano and Carlos Beltran crapped the bed last year? We obviously can't know for certain, but I'd say probably not -- or at least not in any significant way.

All else being equal, these underperformances imply that Long's instructions hurt more than they helped. But in reality, so much else comes into play. A player's health, his willingness to improve, and plain old luck all play a role in a player's offensive trajectory, and have little to do with his hitting coach. For all we know, Long may have made Alfonso Soriano's and Carlos Beltran's wOBAs .005 points better, but this was outweighed by a confluence of other factors that made them ~.050 points worse.

Nonetheless, the bottom line is that several Yankee hitters fell short of expectations over the last couple of seasons. And as the hitting coach, it's Long's job to prevent that from happening by being a resource for hitting advice. So deserving or not, Long was the obvious scapegoat when an the Yankees hitters stopped hitting. Maybe he'll have better luck with the Mets.