The Yankees have been connected to Masahiro Tanaka, Ubaldo Jimenez, and Bronson Arroyo in recent days. Odds are that the Yankees will wind up with one of the trio, perhaps two. How has Cashman done in the past with free agent starting pitchers?

As 2013 came to a close, Masahiro Tanaka was posted, hopefully jolting the stalled starting pitching market that also includes the likes of Ubaldo Jimenez, Matt Garza, and Bronson Arroyo. The Yankees have already been connected to Tanaka, Jimenez, and Arroyo, and seem likely to snag at least one of them. This got me thinking about how Brian Cashman has fared with starting pitcher free agents since he was named General Manager in February 1998.

To do so, I reviewed the Yankees' transaction and contract history via Baseball-Reference and Baseball Prospectus respectively. I included both third-party and own free agents, provided that the Yankees' own free agents weren't extended before they hit the open market (one exception: CC Sabathia). That's why you'll see Andy Pettitte, for instance, a few times in the upcoming chart. Then, I adjusted the contract numbers for the inflation of MLB average salaries. By no means is this method perfect, but it helps better compare older deals to today. From there, I compared how much the Yankees' paid per WAR, using FanGraphs' and Baseball-Reference's versions. The versions differ in that FanGraphs' version (fWAR) utilizes FIP, while Baseball-Reference's version (rWAR) uses runs allowed. 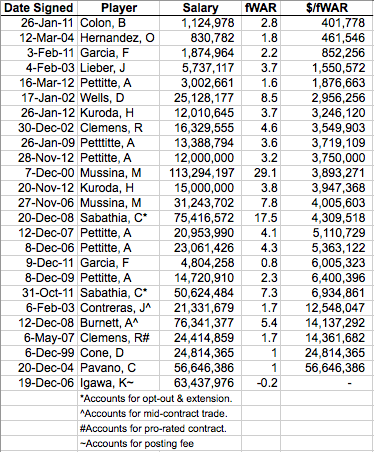 Based on fWAR, Cashman's acquisiton of Bartolo Colon was his best value deal. Another pitcher from the same free agent class, Freddy Garcia, ranked third on the list. Call it luck or good scouting, but there's no doubt that the Yankees received significant value out of guys who looked finished before the 2011 season, at least per FIP-based fWAR. Most of the other good deals aren't shocking, as they were consummated with some pretty darn good pitchers, like Mike Mussina and Hiroki Kuroda. Jon Lieber's one year of rehab and one year of pitching really paid off for the Yankees, with him approaching 4 fWAR in 2004. Pettitte's name comes up all over the place, with him delivering time and time again on multiple short-term deals. Another southpaw, David Wells, was very valuable when he rejoined the Yankees for two seasons in 2002.

Most of the big misses are obvious: Kei Igawa, Carl Pavano, and A.J. Burnett. Roger Clemens' return in 2007 wasn't very special: he didn't have much time to live up to his salary, nor performed overly well anyway. David Cone's deal for the 2000 season is a distant memory, but he was pretty awful for the money he was paid (5.44 FIP). Jose Contreras was a bust who was dealt to the White Sox in the middle of his second season in the Bronx. Going forward, one deal to worry about is Sabathia's extension from 2011; if we assume his decline continues, the $7M figure per fWAR is sure to increase. 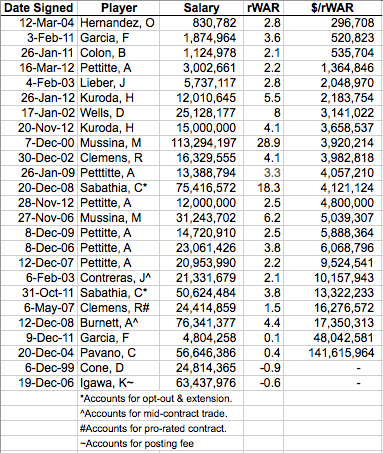 The rWAR list isn't all that much different than the fWAR group. Because Cone was so bad (6.91 ERA), rWAR recorded him at negative value, making him essentially tied with Igawa at the bottom. The top is a bit different, however, with the return of Orlando Hernandez in 2004 being the best move. Garcia and Colon are still in the top three, with Freddy a spot ahead of Bartolo.

It's worth noting the different view rWAR has on Sabathia's extension compared to fWAR. His 4.78 ERA in 2013 barely made him above replacement level, which destroys his value. His contract already looks like an albatross, at least according to rWAR.

What these two lists show is that Cashman has generally had more success with short-term deals, which is no surprise. A one-year contract provides minimal risk, and more often than not, Cashman has done well with these agreements. The long-term deals have been more hit or miss. Again, this isn't a big shock as many long-term deals seem to pay for prior performance rather than anticipated value. Let's hope that if the Yankees sign Tanaka, it pans out the way Moose's contract did, and not like that of Burnett's or Pavano's.

UPDATE (1/1, 9:50PM):
I noticed that I forgot to include Jaret Wright, although he may have been a signing that was over Cashman's head. He slides comfortably into the bottom of the fWAR and rWAR lists, at roughly $9.5M per fWAR and $16.7M per rWAR.