We've paid so much attention to Jacoby Ellsbury over the last few days that I wanted to take the time to focus on the Kelly Johnson signing that has been mostly overlooked. Signing Johnson is a really good move by the Yankees, to not only install an insurance policy into their negotiations with Robinson Cano or against an Alex Rodriguez suspension, but to also shore up their infield bench.

Johnson is not just a glove, he has a bat and he knows how to use it. He's managed to hit an average of 20 home runs a season over the last four years and, despite being a left-handed hitter, isn't completely helpless against left-handed pitching. Over his career he has an essentially identical offensive game against lefties (105 wRC+) as he does against righties (103 wRC+). Unfortunately, he hasn't had an above-average season against southpaws since the 2010 season, and all 16 of his 2013 home runs actually came against righties. That doesn't necessarily mean that he's useless against lefties though.

He's also very much a pull hitter, which the Yankees probably like for Yankee Stadium. He's had a 182 wRC+ to the pull side and 126 wRC+ to center, but has only managed an 87 wRC+ when hitting the opposite way. He's also hit 75 home runs when pulling the ball against only 19 when going the opposite way.

In 2013, Johnson played for the Rays at Tropicana Field, a ballpark that has almost identical dimensions to Yankee Stadium: 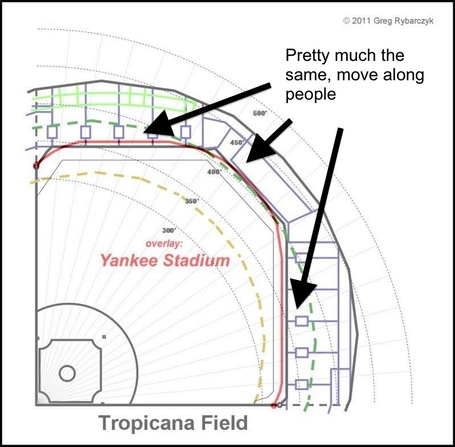 He hit six home runs at the Trop and 11 total to the pull side. That seems to speak favorably to his power numbers in Yankee Stadium, whether he's playing full-time or part-time. However, it might not all be good:

The troubling thing to see is all the ground ball outs to the right side of the infield. Johnson pulls everything so much that he has a tendency to top the ball and ground it harmlessly between second and first. He has a career 57.2% ground ball rate when pulling the ball, which is even worse than what we have seen from Mark Teixeira. If you've been annoyed with Tex, just wait and see what happens if teams start shifting against Johnson if he's playing every day.

Still, Johnson should bring solid production as a reserve, and even if he does end up as the everyday third baseman in 2014, he'll be a hell of a lot better than what the Yankees had there in 2013.