The Yankees have signed Jacoby Ellsbury over the next seven years, meaning his home ballpark has gone from Fenway Park to Yankee Stadium, two very distinct ballparks for very different reasons. Fenway, of course, is known for the Green Monster in left field, and the Stadium is known for the short porch in right field. Both parks play very differently, so how will it effect Ellsbury's hitting game?

The Yankees' new center fielder might be a left-handed hitter, but he isn't a drastic pull hitter. He's actually hit to all fields throughout his career, so on paper his game won't exactly be hurt by moving to New York. He has a 128 wRC+ when hitting to the pull side, but he also has a 134 wRC+ when hitting the opposite way. He does have a slightly lower 113 wRC+ when hitting to center field, so that might noticeably be effected in New York, since center is deeper.

Ellsbury is basically trading an advantage in one field and moving it to another. In Fenway he was helped out by a shallow left field and a giant wall. That's all going away, as left field is now 100 feet deeper in Yankee Stadium and doesn't include a wall that basically turns everything into a double. What he's gaining, though, is a right field that is 100 feet shorter, which might actually help his power numbers even more than the Green Monster could. 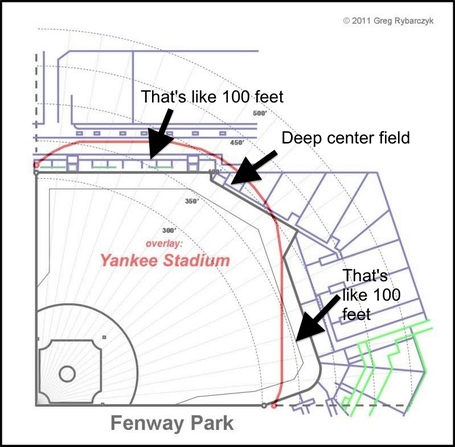 While his ability to hit singles anywhere in the field won't change, his power ability to left might. He won't have a wall to hit doubles off of, though some of them might have been high enough to get out anywhere else, however, Yankee Stadium right field could help him with his home run totals. In his career, Ellsbury has only hit two home runs to left field, while hitting 55 to right field. To give you a visual representation of how left field might hurt him and right field will certainly help him, I edited his spray chart from 2011 through 2013:

As you can see, anything close to the left field wall in Fenway is going to be in the middle of the outfield in New York, so the chances of an out are increased. Right field is so short at Yankee Stadium, compared to in Boston, that he will likely add several more home runs a year while also increasing the amount of fly balls that come close to the wall. Those can drop in for a double or sneak over the wall for a patented Yankee Stadium cheapie.

The thing we will see is how well he really is at hitting the other way when those off-the-wall doubles turn into long fly balls to nowhere. It's obvious that his power numbers could fluctuate depending on where he hits the ball, however, Ellsbury thrives as a singles hitter, so he'll be getting on base no matter where he is.