The velocity is only a symptom of the real problem

Share All sharing options for: CC Sabathia and the great arm slot drop

We all know that CC Sabathia had a terrible season in 2013, but what was the cause? Weight loss? Injury? A combination of the two? We obviously can't be sure, but whatever the reason, it doesn't look good. CC lost an incredible amount of weight before the 2014 season, but he's also dealt with a few injuries too.

It's clear that his velocity has dropped considerably over the last two seasons: 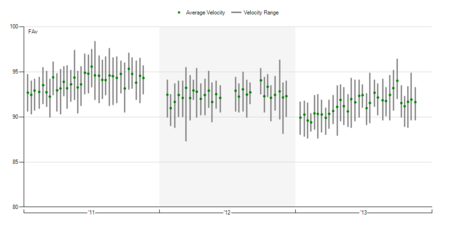 But is that the problem or simply a symptom of something much worse? Reading Mike Petriello's piece on Rotographs got me thinking about the issue being more mechanical than anything else. 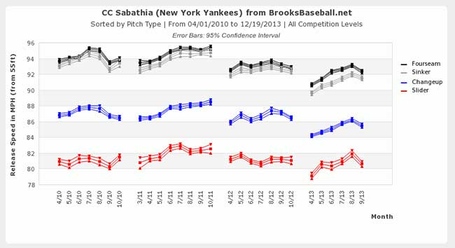 It's not just that his release velocity was lower in 2013, but the velocity between his pitches wasn't even proportionate. In all his other seasons, his pitches more or less follow the same velocity paths. This is important because many pitchers rely on their breaking pitches in relation to their fastball velocity. CC Sabathia is not a pitcher that relies solely on his overbearing fastball. He uses his changeup (17.8 K%) and slider (48.5 K%) to get strikeouts, but if the velocity of those pitches are not proportionate, he could be messing up his pitch sequencing and throwing meatballs that are going to get hit.

For the first time in the last four seasons, a gap existed between his sinker and fastball velocities. As a result, his 2013 slider was the least valuable of his career (-1.81 wSI/C). While his changeup was relatively in sync with his high-velocity stuff, but did not match well with his slider as much as it usually does. It just so happened that it was also the first time his changeup was worth negative value (-1.55 wCH/C). As a result, he had career-high line drive and fly ball rates off his valuable slider, though it was still a positive value pitch overall. A contact rate consistent with his career shows that it's not that his slider was getting pounded, but when he threw it, and hitters did make contact, they were hitting it better than usual because his other pitches that were supposed to set up the slider were not doing their job.

But why is this happening to him? It could all come down to his arm slot. 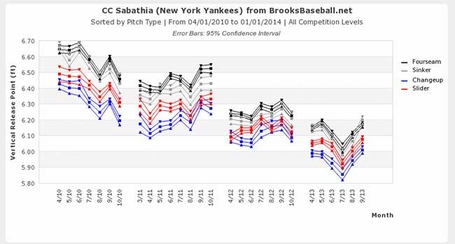 Since 2010, his arm slot has consistently dropped more and more and it's not looking good. Pitchers generate velocity, control the ball's location and even implement deception based on their arm slot. An arm slot can change for any number of reasons and it usually results in a pitcher going through a rough patch until they can the proper corrections. It's possible that it's the weight loss, as one scout said (also from the Petriello article):

"The weight loss has created a balance problem for him," said one talent evaluator. "He's all over the place. He's learning how to pitch in that body, a body he's really never had. I don't think there's anything wrong with him other than that. Sometimes you pitch at a certain weight all your life and then someone has the brilliant idea that you should lose weight because it's putting stress on your knees, you do it, and then you're dealing with something else."

A sudden loss of weight can definitely contribute to his inability to maintain the right arm slot. His arm is thinner, so it's hard to determine his comfort zone. It's also possible it's due to a few small injuries that have left him trying to support his large frame. In 2010, his release point dropped as he dealt with a meniscus tear all season that eventually required surgery. In 2012, his release point was drastically lower all year long. He dealt with a groin strain in June and July as well as elbow inflammation in August. Coincidentally, this is the first time where it appears that his arm slot for his different pitches intermingled with each other, so it was clear that something was out of whack, at least mechanically. Then he underwent elbow surgery and his arm slot sank even further in 2013.

The trouble with arm slots is that if a pitcher's mechanics fall apart there's a good chance he can injure himself. That's usually when a devastating shoulder injury occurs; when something suddenly changes. It's possible he could make a correction, but it looks like he's been trending downward for a long time.

Jeff Zimmerman's MASH Report tries to anticipate pitching injuries by using age, injury history and experience and coming up with a DL percentage chance. He gives CC Sabathia a 47% chance of seeing time on the disabled list, which ranks as the 16th likeliest among MLB starters.

There's the chance he could regress back to his 2012 version, but unless he fixes his mechanics (does he need to regain weight?) he could end up with a serious, career-threatening injury. He's been healthy in that regard for years, but can his luck continue? It's a good thing his contract has such specific language about the health of his pitching shoulder, because before long it could come into play. He has another three guaranteed years, but at least 2017, when he'll be 36, has language built in to prevent the Yankees from being stuck with an injured former ace:

In 2014, it won't be about learning how to pitch with diminished velocity, it should be about how to make corrections. All we can do is hope that he's healthy and can at least improve over 2013, but after that it will start to become more about if he can survive. He's owed $96 million over the next four years, because if his shoulder holds out and he can't improve, then the Yankees are stuck.