Cree is followed on the list by one of his teammates, a hard-luck submariner who deserved a better fate.

Although Hall of Fame spitballer and 1904 41-game winner "Happy Jack" Chesbro was easily the Yankees' most famous Deadball Era pitcher, they employed numerous fine arms that helped keep the period's offense down. One of these such pitchers was submariner Jack Warhop, who played for the Yankees at the exact same time as the previous player on this list, Birdie Cree.

Not much is known about Warhop's younger days other than the fact that he grew up in West Virginia only 21 years after the state seceded from Virginia. He was born as John Milton Wauhop to a French-Irish family; his last name did not change to "Warhop" until his playing career began. (The reason might have been that it was easier to pronounce, "War-hoop.") He did not achieve notoriety until he was a 21-year-old in 1906. Prior to that, he pitched for a local C & O railroad sponsored team in his hometown of Hinton. A traveling Cherokee Indian baseball team visited and played against them, though they needed to borrow a pitcher. Warhop pitched for them, won three games in a row, and left Hinton with the Indians, not to return for 20 years.

Two years later, another similar story of discovery emerged regarding Warhop. There was a minor league team in the Wisconsin-Illinois State League named the Freeport Pretzels, and they were managed by Bill Moriarty, the older brother of New York Highlanders third baseman George Moriarty. Freeport played an exhibition game early that summer against that same semi-pro Nebraska Indians team, who pitched Warhop against the Pretzels. Warhop pitched all 12 innings of a 2-2 tie, and Moriarty was so inspired by Warhop that he signed him on the spot for $80 per month.

For the rest of that season, Warhop justified Moriarty's decision by pitching to a 23-7 record with a 2.58 RA (earned runs were not tracked) and a minuscule 0.812 WHIP in 293 innings. Those were remarkable numbers, but he somehow got even better at age 22. He went 30-6 with a superb 1.44 RA and 0.772 WHIP in 325 innings. He was the best pitcher in the league, and he attracted the attention of major league clubs. The Detroit Tigers decided to sign Warhop and assign him to Pennsylvania's Williamsport Millionaires of the Tri-State League.

Playing alongside future teammates Cree, Harry Wolverton, and Eddie Foster, Warhop again excelled. It was a Class B league, a little bit better than Freeport, and it gave him a bit more of a challenge. Nonetheless, Warhop still pitched to a 29-7 record with a 2.95 RA and a 1.066 WHIP in 305 innings. He even chipped in at the plate a little with a .274 average and a .342 slugging percentage. A dozen teams allegedly bid for Warhop's services as the season came to a close, but the Highlanders came out on top. Impressed by his efforts, owners Bill Devery and Frank Farrell signed Warhop before the end of the 1908 season, and he made his MLB debut on September 19th.

A career with minimal run support

Unfortunately for Warhop, he played out his eight-year career at a low time in Yankees history. The Yankees had just one winning season during his tenure, and he could only manage a 14-14 record that year, which was sadly the only time he reached .500. His underwhelming size and velocity did not intimidate hitters, but he still had a fine reputation throughout the league:

"(Jack) Warhop has not the size or strength to strike a ball down the groove with (Walter) Johnsonian speed. His fast ball and curve, though fair, are not extraordinary, but the way he mixes them with his slow ball - combined with his extraordinary control - would make him a valuable asset to any club." - Baseball Magazine (Ray Istorico, McFarland Publishing, 02/28/2008, Greatness in Waiting: An Illustrated History of the Early New York Yankees, 1903-1919, 'The Unluckiest Pitcher in the League, Page 148)

"Chief" Warhop had a strong debut in 1909 for the team, now managed by George Stallings. The club went 74-77, a large jump from the 103-loss dud of '08, and Warhop was a big reason for the improvement. Although his easy motion often allowed him to pitch in relief, he was a starter the majority of the time. He pitched to a 92 ERA- and opponents hit just .223 against him. His submarine motion occasionally led to some wildness as indicated by his league-high 26 hit by pitches (and league-high 18 hit by pitches in 1910--see Matt Ferenchick's post for more about Warhop's odd beanball habit). He threw three shutouts and pitched to a fine 1.142 WHIP. Overall, his 4.6 rWAR was ninth in the league, a strong showing for a rookie. 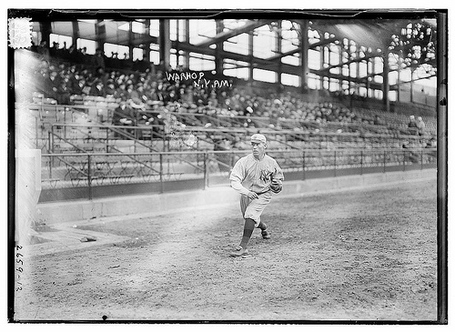 via Flickr, in the Library of Congress and public domain

The righty took a step back in 1910-11 with ERAs below league average despite a 3.00 mark in 1910. By the time he rebounded for his career year though, the now-Yankees were awful again. The 1912 group lost 102 games, even though Warhop pitched a career-high 258 innings to an 82 ERA-, 89 FIP-, and 6.5 rWAR, the fifth-best mark in the AL. Many times when he pitched, the Yankees were shut out, a recurring theme for his career; his career win/loss record of 23 games under .500 could largely be explained by the fact that the Yankees were shut out 21 times when Warhop was on the mound. If Warhop didn't have any run support at all, he simply couldn't win, regardless of how nice his peripheral numbers looked.

1913 was an injury-shortened campaign for Warhop, but he rebounded at age 29 in 1914 with his last great season, though yet again for a poor ballclub. The Yankees went 70-84 in 1914 under Frank Chance and record-low 23-year-old rookie manager Roger Peckinpaugh, and Warhop went 8-15. He had a fantastic ERA- of 86 and a career-low WHIP of 1.043, but it did not help. In 1915, Warhop struggled to a career-worst 133 ERA- (3.96 ERA), and given his $4,500 contract, the Yankees decided to part ways with Warhop at the end of the season. Before the end though, Warhop did achieve one slight bit of immortality on May 6th of that year:

In the third inning at the Polo Grounds, 20-year-old pitcher Babe Ruth slammed the first pitch off Yankee right-hander Jack Warhop into the second tier of the right field grandstand for a home run. It was the first home run for the youngster in his 18th time at bat in the major leagues.

[Sportswriter Damon] Runyan wrote in his account of the game: "Fanning this Ruth is not as easy as the name and the occupation might indicate. In the third inning, Ruth knocked the slant out of one of Jack Warhop's underhanded subterfuges, and put the baseball in the right field stands for a home run. Ruth was discovered by Jack Dunn in a Baltimore school a year ago where he had not attained his left-handed majority, and was adopted and adapted by Jack for use of the Orioles. He is now quite a demon pitcher and demon hitter when he connects."

"Mr. Warhop of the Yankees," wrote Wilmot Giffin in the New York Evening Journal, "looked reproachfully at the opposing pitcher who was so unclubby as to do a thing like that to one of his own trade. But Ruthless Ruth seemed to think that all was fair in the matter of fattening a batting average."- BaseballGuru.com

Yes, it was Warhop who surrendered the first of Babe Ruth's 714 career home runs. He also gave up Ruth's second home run on June 2nd. Back then, Ruth was just a kid pitcher, but he would go on to become someone far more important. (Here's a neat picture of the two men united 20 years later in 1935, around the time of Ruth's final homers with the Boston Braves.) Warhop did achieve a couple other obscure marks, like becoming one of four pitchers to steal home twice in his career. Warhop only stole eight bases, but apparently, he made them count.

Thirteen years after his last pitch in the majors, Warhop was actually still pitching, too. He bounced around minor league clubs in Salt Lake City, Toronto, Norfolk, Columbia, Bridgeport, Spartanburg, and New Haven. With Bridgeport in 1927, he defied his age by throwing a 17-inning complete game, and he also threw the full slate during a doubleheader later that season. Warhop was the oldest pitcher to accomplish this feat. He threw his last professional pitch at age 43 with the Pacific Coast League's Portland Beavers in 1928 and moved back to Illinois. Warhop returned to where he began in Freeport all those years ago. He died a day before the first game of the memorable 1960 World Series at age 76 after an extended illness.

Had Warhop been on a higher quality team at the time like the three-time World Series champion Philadelphia Athletics, he might have had a far better record and reputation. Alas, he was stucky on a crappy team and is mostly forgotten by history.