A century before Brett Gardner took the field for the Yankees, another swift outfielder impressed the hometown fans with his speed and patience: Birdie Cree.

Several of the players who appear on the list of the top 100 Yankees might not necessarily be very well-known at all to the majority of Yankee fans. That is because they played in near-anonymity for a subpar team that had never won anything and were thus overshadowed by the older teams in the Polo Grounds and Brooklyn. One of these players was Birdie Cree, a man who never hit below league average until his final year in baseball.

From State College to Hilltop Park

Cree was born in 1882, back when the National League was just six years old, its primary competition was the American Association, and the rules of baseball were still in development. It was a far cry from where the game would be even by Cree's time in the pros. He grew up in Khedive, a very small town in Greene County, the most southwest area of Pennsylvania, and he went on to play college football and baseball at Penn State. A collarbone injury ended his football career, but he stayed on in baseball and played with some semi-pro teams while at Penn State. Cree's .766 career OPS still ranks as easily the best of all Nittany Lions to make it to the majors.

In 1906, Cree made it into professional baseball with a Sunbury, PA team in the High Hat League, and then moved to Vermont to play with its Burlington team. The next year, Cree joined the ironically-named Williamsport Millionaires of the Tri-State League back in the Keystone State. In 90 games, he batted .297 with a .387 slugging percentage, and returned in '08 to hit an impressive .332 with a .519 slugging percentage in the same amount of games. At 5'6" 150 pounds, Cree was a small guy, but that only made it harder for pitchers to face him and his small strike zone. Major league teams were not blind to such performances in the minors, and New York's American League club took particular notice of Cree.

1908 was a horrible season for the club known to many as the Highlanders. They finished in the AL cellar, lost a still-franchise-worst 103 games, and drew only 305,500 people to rickety Hilltop Park. It was such a disaster that the team's original manager, pitcher Clark Griffith, and co-owners Bill Devery & Frank Farrell decided to part ways midway through the campaign. They tapped fiery infielder Kid Elberfeld as the new manager and the result was shockingly awful. Despite managing 32 more games than Griffith, Elberfeld's group won just three more games (27-71, a .276 winning percentage). However, one small positive from the '08 campaign came from the team's decision to sign Cree.

A Highlander and a Yankee

They had already recruited Cree's former Penn State teammate, Henry "Irish" McIlveen in August, and Cree joined him with the Highlanders in mid-September when Elberfeld's team bought his contract. Although he made his debut on September 17th, the 25-year-old made his way into 21 games before the season concluded and showed promise with a .345 OBP and a 110 wRC+. He also stole the first of 132 career bases with the Yankees, a total that ranked within the Yankees' top ten all-time through their first 50 years in New York.

Eastern League manager George Stallings was made the skipper of the club for 1909, and while Cree wasn't a primary starter, he made nearly 400 plate appearances. He matched the aging future Hall of Famer Willie Keeler's production in roughly the same amount of games and actually hit two of the team's 16 homers on the Deadball Era season. The Highlanders still finished in the second division, but they made a 23-win improvement under Stallings, falling just three games under .500 after finishing 52 games under in '08. The fans liked the team more, too, as the attendance of 501,000 ranked third in the league.

Stallings again guided the team to a big jump in 1910, as the team actually finished second in the AL, albeit far behind Connie Mack's 102-win Philadelphia Athletics. Rookies Russ Ford and Hippo Vaughn had phenomenal years on the mound with sub-two ERAs, and Cree had a terrific season with 16 triples (fourth in the AL), four homers (sixth), and a .775 OPS (sixth). He shook of an early season beaning from a "Big Train" Walter Johnson fastball to the head, too, which was no easy feat. Harry Wolter, Bert Daniels, and Cree combined to make one of the AL's best outfields, though Daniels often found himself on the bench in favor of the inferior Charlie Hemphill. 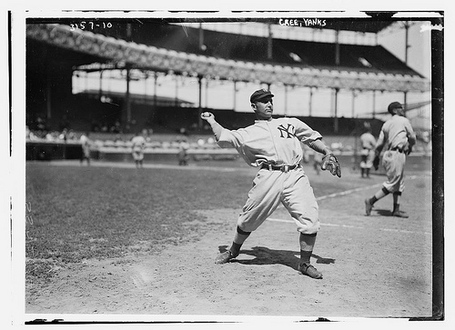 Due to disagreements with ownership though, Stallings abruptly quit his post as manager with 14 games left in the season, and Devery & Farrell had to watch in humiliation four years later as Stallings led the "Miracle" 1914 Boston Braves to the World Series title in a sweep over the powerhouse A's. First baseman and noted gambler Hal Chase took over the reins from Stallings at the end of 1910, and he stayed at the helm for 1911, which was sadly a mediocre step back for the team. They finished exactly at .500, 76-76, but in a distant sixth place. It was unfortunate timing too, since Cree had his career year in 1911 with an undeniably fantastic season.

Cree was all over the AL leaderboards that year, most notably in triples and stolen bases. His 22 triples were second only to Ty Cobb's 24 in the league and still rank today as the second-highest total in team history, while his career-high 48 steals were third in the league and the fifth-most in franchise history until a fellow named Rickey Henderson came along. He had career-best marks in nearly every offensive category, including a 148 wRC+ and .436 wOBA. Cree received a handful of MVP votes and finished sixth in the league. The Highlanders were obviously a mediocre team, but Cree's superb year was worthy of praise.

Going into the 1912 season, it appeared the 30-year-old would be a vital member of the franchise going forward. Unfortunately, baseball before advancements in healthcare could be a cruel game. Cree was playing almost as well as he did the year before thanks to a 140 wRC+ and 1.8 fWAR. He broke his wrist during a game though, and that his season was ruined; he only appeared in a handful of games the remainder of the season. He would never truly be the same player again. The Yankees badly missed Cree's bat in the lineup, and they lost 102 games under new manager Harry Wolverton. They've never had a worse winning percentage in franchise history than the .329 mark from 1912. Unsurprisingly, Wolverton lasted just the one season at the helm and was replaced by former Cubs first base great and two-time World Series champion player/manager Frank Chance.

Cree had a comeback season of sorts in 1913. He appeared in a career-high 145 games and hit 25 doubles with 22 stolen bases, but could only produce league-average offense, though Cree was still the 97-loss team's second-best hitter behind Wolter. A slump actually put him on the bench toward the end of the season, and Cree was saddened to learn that owner/team president Farrell sold him during the off-season to the minor league Baltimore Orioles of the International League. There was a rumor that the Pittsburgh Rebels of the new, rogue third major league, the Federal League, was pursuing Cree at the time as well, offering him a three-year, $15,000 contract. The Orioles were the ones who ended up with Cree though, as he agreed to a deal worth $4,500 for the 1914 season, a figure equal to what he made during his stellar 1911.

The Orioles were managed by former player Jack Dunn, who personally visited Cree at his home in Sunbury, Pennsylvania to secure the deal. Cree was joined in Baltimore by his former New York teammate Bert Daniels, and they both excelled against the inferior International League pitching, which was losing talent to the Federal League anyway. Cree and Daniels were two of only three players to appear in at least 65 games and notch a slugging percentage of at least .435, and Cree did so with a team-leading .356 batting average. (The third player was actually some 19-year-old lefthanded pitcher who Dunn brought in from the local St. Mary's Industrial School named George Ruth; Dunn had to sign his contract as a legal guardian, prompting Cree and his teammates to refer to him as "Dunn's babe." He went on to achieve some relevance. Cree and Ruth are both included in this 1914 Orioles newspaper picture.)

The Orioles were doing well, but the Baltimore Terrapins, the new Federal League team in town, was drawing people away from the Orioles, and Dunn was losing money. On July 7th, he was sold back to the Yankees, who were impressed by his minor league numbers, for $8,000 and outfielder Bill Holden. He stayed hot for the rest of the season and even looked a little bit like the Cree of old with a 138 wRC+ in limited action (77 games). By 1915 however, Cree was clearly in decline, and new manager "Wild" Bill Donovan had to bench him due to his struggles. He was still a patient hitter, as his .353 OBP in 1915 attests, but he did not do much hitting otherwise.

With his baseball future unclear, Cree retired after the season at age 33. He did not want to return to the minors again, stating "I had no intention of going to the bush leagues." He returned to Sunbury and became a banker at the First National Bank. He made a few appearances back in New York at Old Timers' Days, but led a quiet life back home in Sunbury until his death at age 60 in November of 1942 after fighting an illness.

While Cree is certainly not one of the most memorable Yankees, he was one of their most successful Deadball Era players and perhaps could have had a longer career had injuries not curtailed it. Nonetheless, he still deservedly ranks as one the Yankees' top 100 players.