Through tremendous speed and agility, Gardner has elevated his defense to a truly elite level during his six years in the Bronx, earning a spot on the top 100 Yankees.

Unlikely rise from cut to the Show

Brett Gardner grew up in a very small town in South Carolina that actually already had an established All-Star Yankee--Willie Randolph. His high school, Holly Hill Academy, only had 22 people in his 2001 graduating class. Although some college scouts liked his speed, no one felt comfortable offering him a Division I scholarship. Undeterred and unwilling to immediately accept a Division II scholarship, Gardner attended the nearby College of Charleston and decided he would try out for the baseball team. His audition was a disaster; not a single hit reached the outfield and his throws from the outfield were unimpressive. Gardner recalled, "If I was a coach, I'd be like, 'This kid's not going to cut it.'" The college's coaches agreed, and he did not make the team.

Gardner brought his baseball equipment back home to Holly Hill, figuring his baseball days were done. His father Jerry, a former minor league infielder in the Phillies organization from 1973-76, thought that his son had the talent to make the team. A little while later, Jerry wrote to John Pawlowski, the College of Charleston's coach, appealing that his son at least receive a second chance. Pawlowski and his colleagues figured it couldn't hurt, so Gardner was given a second shot in some scrimmage games. He impressed, and the next season as a starter, he hit .284/.370/.353 in 56 games, swiping 28 bases while only being caught five times. His play elevated further in his junior year, as he hit .397/.475/.574 with twelve doubles, nine triples, and four homers in 60 games, then became an All-American in his senior year, a phenomenal .447/.506/.571 campaign with 122 hits and 38 steals in 63 games. Jerry was right; the kid could play.

In the 2005 MLB Draft, the Yankees made Gardner a third-round pick, 109th overall in a mostly-unimpressive draft class headlined by flameouts C.J. Henry and J.B. Cox, though an unsigned Doug Fister was a sixth-round pick and high school outfielder Austin Jackson was an eight-round pick. The Yankees felt they were taking a gamble on Gardner, who they viewed as a speedster with "great plate discipline," but no power. Vice-president of scouting Damon Oppenheimer stated, "He's an absolute flyer. He's a fast runner who can really patrol center field. He can steal bases, has instincts to run and has performed with the bat." Minor League Balls' John Sickels thought Gardner was an slight overdraft and only gave him a C+ rating in 2006 book.

In Staten Island in '05, Gardner hit .284/.377/.376 with 19 stolen bases in 73 games. While he was there, he took his girlfriend on a tour of Yankee Stadium, telling her that the next time he came back, he wanted to be playing. In just three years, he would get his wish. Gardner impressed in High-A Tampa at the start of '06, crushing Florida State League pitching to a .323/.433/.418 line with 30 steals in just 63 games. He spent the next two half-seasons in Double-A Trenton, eventually earning him a promotion to Triple-A Scranton for the latter part of '07. By midseason '08, the Yankees needed an outfielder for the bench. Gardner finally got the call, and he made his MLB debut on June 30, 2008.

Bench player to the starting lineup 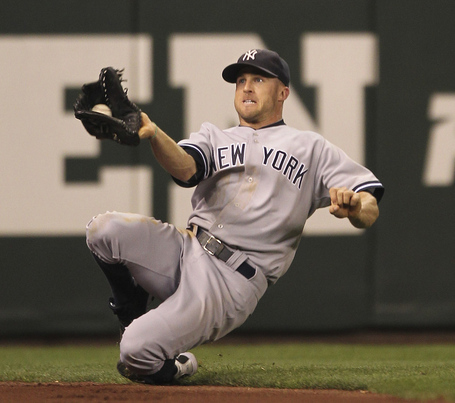 Gardner had a modest rookie year in the big league with a weak .223/.283/.299, 54 wRC+ batting line, but he did have one big highlight. In just his sixth game, he had the first multi-hit game of his career, and the second hit was a walk-off single against Jonathan Papelbon in a Yankees/Red Sox game. He did impress Joe Girardi with his baserunning (13 steals in 14 attempts) and defense (1.2 dWAR) though, which almost alone helped him become a one-win player despite a poor performance at the plate.

In '09, Gardner split time in the outfield with Melky Cabrera, appearing in 108 games with a 91 wRC+ and 26 steals as the Yankees won their first division titles in three seasons. Gardner was mostly a defensive replacement in the playoffs, as Melky received the lion's share of the starts until he went down with a hamstring injury in the World Series. Gardner started the final two games of the Fall Classic as the Yankees finished off the Phillies to win the championship. His hometown and college coaches were ecstatic that one of their own was a World Series winner.

Gardner has since moved on from the bench and is now a regular in the Yankees' outfield, as the Yankees chose him, not Melky, to be a regular from 2010 onward. The first season was the best of his career thus far, as his 7.4 rWAR ranked fifth in the American League, and his 6.0 fWAR ranked eighth. He won his first Fielding Bible Award and finished third in the league with 47 stolen bases. In 2011, he tied with Coco Crisp for the AL stolen base crown, swiping a career-high 49 bags.

Since 2010, Gardner has rewarded the Yankees' confidence with a .270/.359/.387 triple slash good for an even 101 OPS+ and 14.3 rWAR in total in just four seasons (one of which was injury-plagued). His 80.6% stolen-base percentage ranks fourth in team history behind only Rickey Henderson, Alex Rodriguez, and Johnny Damon, and his rising total of 150 stolen bases ranks 12th in team history. With just four more steals, he will pass Horace Clarke, Roberto Kelly, and Mickey Mantle to reach ninth in team history.

It's fantastic that 2010 and 2011 Fielding Bible Award-winning defense, as seen in the GIFs below, has become the norm for Gardner.

Gardner might move up on this list as the years pass, but he has done a terrific job already through his superb defense and surprising plate performance. Not bad for a kid who couldn't make a college baseball team.

Stats from Baseball-Reference and FanGraphs (through July 17, 2013)