Like Wong, Gipson was an example of a pinch-runner who spectacularly failed at his job.

The 2013 World Series has been utterly bizarre so far. The Red Sox took the opener thanks to sloppy Cardinals defense and one the best pitchers in baseball looking like crap, Game 2 was decided on Red Sox reliever Craig Breslow's throwing error, and Game 3 featured the first obstruction call to ever end a playoff game. Game 4 on Sunday night thus had a lot to live up to, and amazingly, it met the grim expectations. Boston took a two-run lead into the ninth, but the Cardinals put a runner with one out on when pinch-hitter Allen Craig hit a long single.

Craig entered the World Series coming off a Lisfranc injury, which has made his baserunning look like Jorge Posada jogging through molasses while being bit by snakes every step of the way (or Banjo-Kazooie's Bubblegloop Swamp). The Cardinals understandably put a pinch-runner in for him: two-time Baseball America Top 100 prospect Kolten Wong. The 23-year-old rookie second baseman was called up in mid-August and playing sparingly the rest of the way, putting up puny hitting numbers in 62 plate appearances. However, he did hit well in Triple-A before his promotion with a 127 wRC+ in 107 games, so he made the playoff roster as a backup infielder who could occasionally pinch-hit and use his impressive speed as a pinch-runner if necessary. So on Sunday night, he ran for Craig at first base. Matt Carpenter popped out to second base to put the Cardinals down to their last out, but they had great hope with postseason menace Carlos Beltran at the plate. He took a ball from Red Sox closer Koji Uehara, and then this happened: Ouch. For the second straight day, a playoff game ended in unprecedented fashion, as none had ever ended on a pickoff. While it was foreign to October baseball though, it should not have felt completely unfamiliar to people who have watched the Yankees since at least 2003. On a much smaller stage, a pinch-runner similar to Wong etched his name in Yankee fans' memories: Charles Gipson.

Gipson was another classic example of why there is far more to baserunning than merely being a fast runner. Gipson was clearly fleet of foot, as he stole 215 bases in 1,038 games in the minors over 12 seasons from 1992-2005. It was kind of a miracle that Gipson ever even made the major leagues given his history. He was selected all the way back in the now-defunct 63rd round of the 1991 MLB draft by the Seattle Mariners out of Loara High School in Anaheim, but he was able to hang around in the minors for six years before making his MLB debut with Seattle on Opening Day 1998.

Gipson bounced between Seattle and Triple-A Tacoma for the next three years, and found a nice job as a utilityman for a Seattle team that won an AL record 116 games in 2001 and made the ALCS in consecutive years from 2000-01 (losing to the Yankees each time). He was not a good enough hitter to be a starter though, and after five years with the Mariners, he became a free agent in December 2002 when Seattle declined to offer him arbitration. He agreed to a contract with the Cubs but was cut near the end of Spring Training. Seeking some speed off the bench, the Yankees signed him on April 7th, and he reported to Triple-A Columbus.

The Yankees had signed outfielder Chris Latham to be their primary pinch-runner off the bench at the start of '03, but they liked Gipson's expanded defensive versatility, which complemented his equally impressive speed. Latham was in talks to sign with Japan's Yomiuri Giants, so they decided to swap the two outfielders and designated Latham for assignment. Gipson only played three games with the Yankees before his baserunning struggles became a problem. While he had stolen many bases in the minors, he had a dismal 66.5% success rate down there in 275 attempts, and he was only 12-for-21 in his five-year MLB career.

On May 14th, the Yankees were tied at two in the seventh inning of a tight game against the defending World Series champion Anaheim Angels. Robin Ventura drew a leadoff walk, and manager Joe Torre elected to pinch-run Gipson for the aged third baseman. Although consecutive fly outs by Raul Mondesi and Nick Johnson kept Gipson on first base, the Yankees sent hard-hitting Alfonso Soriano up to hit against Francisco Rodriguez with two outs. Soriano certainly had the power to bring Gipson home on a double, or perhaps even a two-run homer. Throughout the inning, Angels catcher Bengie Molina kept a close eye on Gipson at first base and noticed he was leaning toward second. After a strike to Soriano, Molina fired to first baseman Scott Spiezio, who tagged Gipson out before he reached the bag. The inning was over and the Yankees went on to lose, 5-3. It was a frustrating pickoff with Soriano at the plate, but one mistake was forgivable.

Over the next month, Gipson appeared in seven games and even stole a pair of bases in one game. However, May was frustrating for the Yankees, who entered the season with the usual high expectations and followed an impressive 21-6 April with a dud month of May: 11-17. They began June with a 3-3 split over the first six games, which included a pair of game at Wrigley Field, the Yankees' first visit there in 65 years since sweeping the Cubs in the '38 World Series. The two teams wrapped up this reunion series with the featured Sunday Night Baseball game on ESPN. It was a long ball battle, as the two eventual playoff teams combined for five homers and the Cubs carried an 8-5 lead into the ninth inning.

Cubs closer Joe Borowski entered the game and began by striking out Soriano. Derek Jeter followed with a walk though, and Jason Giambi doubled to right, bringing up the always-dangerous Posada. He grounded a single up the middle to score both runners, making it a one-run game with the tying run on base and the go-ahead run at the plate in Ventura. He lifted a fly ball to right, and the Yankees were down to their last out. Seeking some extra speed on the bases in case Mondesi hit a double, Torre pinch-ran Gipson for Posada at first base. Mondesi's 13-month tenure as a Yankee was controversial, but there was no denying that he was off to a hot start in 2003. He was hitting .291/.362/.527 to date with 17 doubles and 11 homers in 62 games, a 45 double/29 homer pace.

Like Soriano a month prior, Mondesi was definitely a threat to knot the game all up or even give the Yankees a lead, even after falling behind 0-2. Before Borowski threw another pitch though, the righty whirled around and threw to first baseman Eric Karros, nabbing Gipson to end the game. 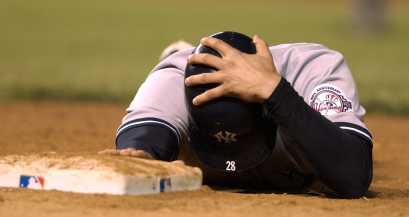 Yankee fans were furious. Torre referred to the play as the type to "make your stomach drop out," but he was forgiving of the "anxious" Gipson, noting that he had the green light to run and get in scoring position. To his credit, Gipson took the heat after the game, stating his fault, that he was "a little too aggressive," and that there were no excuses for the mental error. Nonetheless, he appeared in just five more games before being demoted again to Columbus. He never returned to the Yankees' clubhouse and appeared in just 24 more games over the next two years with the Devil Rays and Astros before retiring at the end of the 2005 season.

Obviously Wong's mistake was on a much bigger and more embarrassing national stage, but watching him get picked off at first base certainly reminded me of Gipson's bonehead pickoff in '03. Gross.