Baseball Prospectus released their Mid-Season Top 50 Prospects list (subs req'd) and Yankees top catching prospect Gary Sanchez comes in at number 26. On B-Pro's Pre-Season list, Sanchez ranked 47th, but Jason Parks believes that, despite the bump up in ranking, Sanchez now feels too highly rated at number 26. Parks says that the high upside to Sanchez that comes with a high risk and mixed reviews of how he's done in 2013 makes him feel like his stock as a prospect is falling. 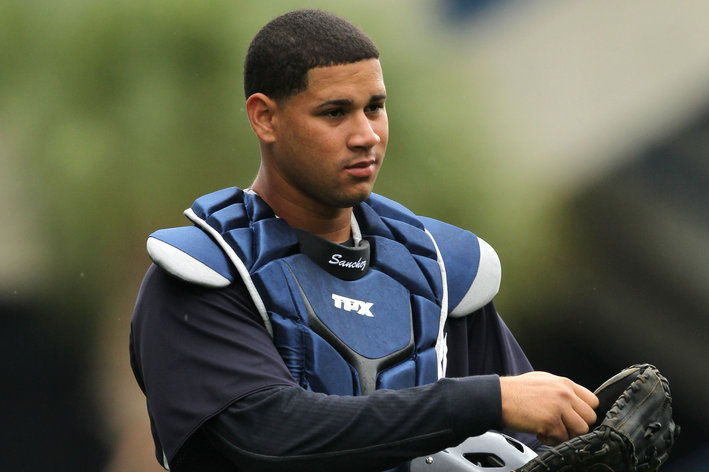 In 63 games for the High-A Tampa Yankees this season, Sanchez has hit .265/.331/.473 with 11 home runs and a 124 wRC+. His BABIP sits at .284, which is markedly lower than it has ever been in his career. After JR Murphy was promoted from Double-A Trenton, it seemed like Sanchez would be on his way to the next level, but the team has chosen to keep him in Tampa, at least for now. Mark Newman told Thunder beat writer Josh Norris that Sanchez still had things that they wanted him to work on at the High-A level.

After a disastrous year on defense in 2011 in which he allowed 26 passed balls in 60 games, Sanchez has really improved on his defense behind the plate, only allowing a total of seven in 52 games behind the plate this season. There were concerns, as Parks mentions, about whether or not Sanchez could stick behind the plate, but it seems like those questions have at least become much less of a concern than they were when he was repeating Low-A Charleston two years ago.

Parks lists Sanchez's estimated arrival to the majors as 2015, which may be a good guess if the team keeps him in Tampa for too much longer this year. Trenton is currently without a real catching prospect on their roster and the team just promoted Peter O'Brien to Tampa, which would mean sharing at least a bit of time with Sanchez until he moves on. If his BABIP corrects to the levels we're used to seeing from him, it's difficult to believe that Sanchez won't hit every bit as well as we've come to expect of him.

Should the Yankees trade Robinson Cano?