With the teams stacked so close together for only a few playoff spots, how will the American League wild card picture shake out?

Labor Day is the unofficial stretch call for the baseball season, and this year in the American League, the race for the wild card seems likely to go down to the wire. With less than a month to go, seven teams (aside from the Red Sox and Tigers, who have established substantial division leads) are within five games of a wild card slot, so a photo finish could be in the offing.

The Oakland Athletics and Texas Rangers are currently tied in the A.L. West, but, with both teams enjoying a 5 ½ game lead over the closest pursuer for the second wild card slot, a play-in game is all but a guaranteed consolation. Less than a week ago, the same seemed true about the Rays, but a costly losing streak has almost put the A.L. East out of reach and removed the wild card safety net in the process. As a result of Tampa's stumble, the Orioles, Yankees, Indians and Royals have been able to revive their playoff push. About 25 games remain, so there's plenty of time for these contenders to make a move. However, just as important as how many games remain for each team is the quality of the opponents left on their respective schedules.

Note: Opponent records are weighted averages based on W-L multiplied by games against each opponent.
Source: baseball-reference.com

If the Rays are looking for help to snap out of their funk, it won't come from the schedule. Not only does Tampa play 15 of its final 26 on the road, where the team's record is 31-35, but it also has one of the most difficult schedules. The Rays' remaining opponents have a weighted winning percentage of .511, higher than all but the Orioles. However, when using only the last 30 games as a barometer, Tampa's schedule yields an even more daunting opposing win rate of .527.

Which team is best positioned to take advantage should the Rays stumble over the many hurdles in their schedule? The Indians, whose September slate includes 14 games against the White Sox, Astros and Twins, boast the easiest remaining schedule based on overall and home/road winning percentages. Some of that edge is mitigated, however, when considering the recent play of the final month's opponents. On that basis, the Yankees hold the trump card. The Bronx Bombers' remaining opponents have a success rate of only .469 in their previous 30-games, which, compared to the Yankees 17-13 record over that span, could be a winning combination. Then again, the Yankees' favorable schedule is predicated on the recent struggles of the Orioles and Rays. If those two teams rebound for the stretch, the A.L. East contenders could wind up running each other into the ground, clearing a path for the Indians or Royals to take the lead.

Unfortunately for Kansas City, the schedule won't be an ally. Not only do the Royals have the largest deficit to overcome, but, in terms of overall, home/road, and previous 30-game records, their remaining slate of games ranks as one of the most difficult. Also, the Royals' easiest stretch doesn't come until the end of the season and requires a trip to and from Seattle without a day off in-between. So, if a Central team is going to stalk the A.L. East contingent, Kansas City is probably a long shot. 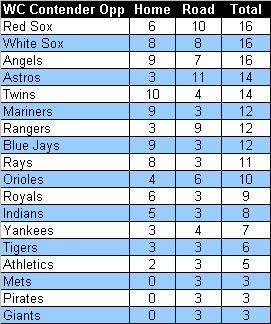 Note: Includes opposition of seven wild card contenders identified above, including the teams themselves.
Source: baseball-reference.com

Although the Red Sox are almost assured of winning the East, its performance in September could still have significant post season implications. Sixteen of Boston's final 23 games are against wild card contenders, so the Red Sox pursuit of home field advantage throughout October could leave many of their opponents on the outside looking in. Meanwhile, teams like the White Sox, Twins and Angels, who also play more than half their games against contenders, could have the opposite impact, although each of those teams has played better in the last month.

Can the Rays hold onto their dwindling lead? Will the Indians be able to take advantage of an easy schedule and sneak in under the wire? Or, is the Yankees' pedigree about to take over? With several contenders still jockeying for position, the A.L. playoff picture isn't likely to come into focus anytime soon.