If Alex Rodriguez' controversial return was a distraction last night, the Yankees should be grateful. With the spotlight squarely on A-Rod, another lackluster effort by the Bronx Bombers went largely unnoticed. Tabloid headlines aside, the real story in Chicago was a Yankee lineup that continues to sink to historical depths, not the embattled slugger batting in the middle of it.

Although there was a lot of hyperbole regarding the significance of Rodriguez's suspension and subsequent season debut, no exaggeration is needed to portray the futility of the Bronx Bombers' offense. The numbers, or lack of thereof, speak for themselves. 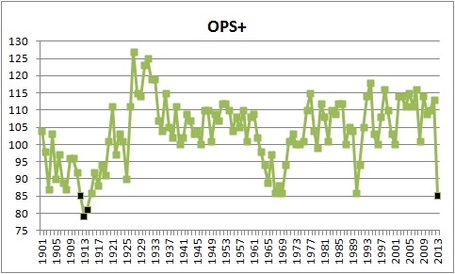 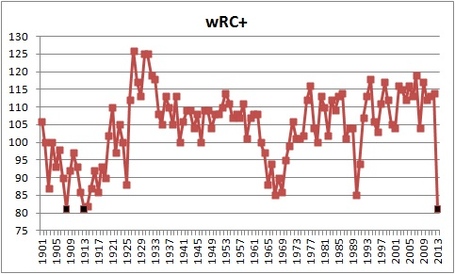 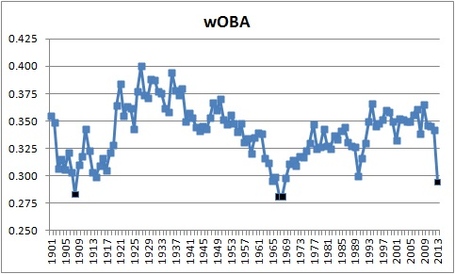 Note: Black markers indicate current season and all years with a rate as low or lower.
Source: fangraphs.com and baseball-reference.com

So, just how bad has the Yankees' offense been? Pick your poison. Based on wRC+, the 2013 team is currently the worst in franchise history. OPS+ (third worst) and wOBA (fourth worst) are a little kinder at the moment, but each metric also places this year's lineup at the abyss. Finally, in terms of runs per game, the Yankees' rate of 3.8 ranks 13th worst in team annals, but that includes the dead ball era. On a relative basis, the 2013 lineup has managed to score only 87.3% of the A.L. per game average, the franchise's sixth worst percentage. 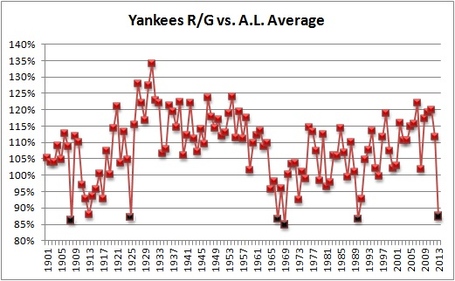 Note: Black markers indicate current season and all years with a rate as low or lower.

The main reason the Yankees' offense has plummeted is because of the equally dramatic decline in the team's number of home runs. Not only are the Yankees on pace for the fewest home runs (in a non-labor shortened season) since 1989, but as a percentage of the A.L. total, the Bronx Bombers' long ball contribution of 5.4% ranks just ahead of only the 1913 team, which didn't have a player hit more than two round trippers. 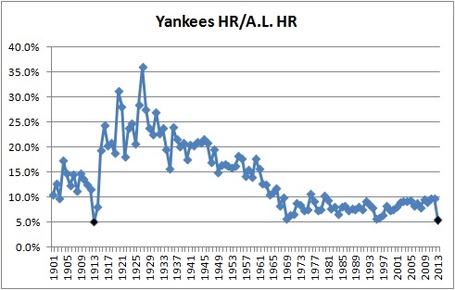 It's probably too late for Alex Rodriguez to save the Yankees' post season hopes, but if the former three-time MVP can come close to even his 2012 diminished performance, he could help the 2013 Bronx Bombers avoid infamy as the worst offense in franchise history, assuming, of course, anyone is paying attention. In an ironic sense, Rodriguez, and the attention given to him, could end up being the deodorant the Yankees need to cast away the stench of an awful offense. After all, with so many holding their nose at the sight of A-Rod, they probably wont be able to distinguish the smell.