In #HIROK we trust, all others pay cash.

On June 29th, Ken Rosenthal tweeted something that is now darkly amusing in retrospect:

To those asking, #Yankees not on Nolasco or any other pitcher. If anything, they have excess (Hughes, Chamberlain). Need bats (duh).

To its credit, Yankees starting pitching simply appears mediocre as a group, as their collective starter ERA- is exactly 100, seventh in the AL. They are fourth in FIP- at 96, BB/9 at 2.4, and fWAR at 10.1. However, those figures are largely the result of one epic man: 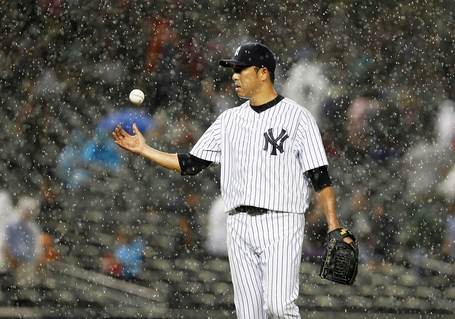 Hiroki Kuroda has been nothing short of spectacular for the Yankees this year, passing the struggling CC Sabathia as the definitive ace of the 2013 Yankees. He's pitched to a 2.38 ERA, a league-leading 167 ERA+, a 1.7 BB/9, and a 1.031 WHIP. Recently, Kuroda has also been supported by the resurgent Ivan Nova, who recovered from a horrible April and a triceps injury to record a 2.15 ERA in seven games and six starts since his recall, helping improve his once-dismal season numbers to a 3.08 ERA and a 129 ERA+.

Outside of Kuroda and Nova, though, the rotation has been a disaster. Four pitchers have made at least 10 starts with an ERA+ below 85, which would be the first time that's happened to the Yankees in 22 years:

There's still a couple months of the 2013 season left, and none of Hughes, Pettitte, Phelps, or Sabathia have an ERA+ below 80, so they could conceivably all finish above an 85 ERA+ and make this rotation look better, but these are dark times for Yankee starters. An obvious pattern is evident among the majority of the Yankees teams listed to have even three such starters: just one made the playoffs. The 2013 Yankees are laughably distant from the powerful offense that the '05 group had, so they are in a heap of trouble. (None of those three '05 starters were in the playoff rotation anyway, whereas if this group somehow miraculously made it, at least two would have to start.)

Can we honestly expect that quartet to get much better though? Sabathia is in the midst of his easily the worst season of his career and hasn't had a remotely good start in a month. Pettitte is 41 years old and has had precisely two starts out of twelve with a Game Score over 50 since returning from the DL on June 3rd. Hughes isn't nearly the mediocre starter he was last year, when he was inconsistent but still posted a 98 ERA+ in 32 starts. His numbers are closer to his "dead arm" 2011 campaign. Phelps has not been as solid as he was last year between the bullpen and rotation. He's even more concerning since he has not pitched for the Yankees in over a month due to a forearm injury, and elbow soreness kept him from making a rehab start Sunday, forcing him to see a doctor this week. There is no inkling of a return date for him until the Yankees hear more information about him.

The Yankees' offense is still not great, even with the returns of Curtis Granderson and Alex Rodriguez. It is not going to be enough to support the team if supposedly reliable starters like Sabathia and Pettitte keep tossing up duds. Forget the playoffs; if the starting pitching beyond Kuroda and Nova doesn't rebound at all, the Yankees will be lucky to finish at .500.