MLB Standings: Can the Yankees make the playoffs?

Share All sharing options for: MLB Standings: Can the Yankees make the playoffs?

The Yankees are 57–54, in fourth place in the division 9.5 games out of first place and yet only five games out of a wild card spot. The problem is that New York needs to beat out the Kansas City Royals, Baltimore Orioles, and two of the Texas Rangers, Cleveland Indians, and Tampa Bay Rays.

That's a lot of teams and it's highly unlikely to happen, even with Alex Rodriguez and Curtis Granderson back in the lineup. In the second half of the season the Yankees have the worst offense in baseball with a 56 wRC+ and an 81 wRC+ for the entire season, the second worst in baseball better than only the Miami Marlins.

The season started off so well in April, but the Marlins have actually been a better team since June 1:

Since May 1 the Yankees have been the worst team in the AL East. They have been two games worse than the cellar dwelling Toronto Blue Jays, probably thank to their 108 wRC+ April that has kept them afloat this long. 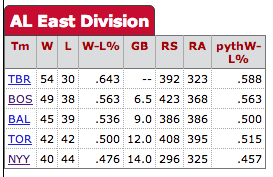 Not only have they been the worst team in their division, but they've been one of the worst teams in the entire American League. The Twins, White Sox, and Astros have been some of the worst teams in baseball this season and are all in line for a protected draft pick in next year's draft. Despite where they fall in these standings, they are actually still above .500 for the season, at last for now. They've been terrible, but because of April they might not even get the reward of a protected pick that comes with such a bad season. 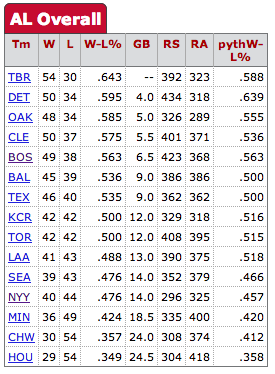 They've been worse than the Angels and just as bad as the Mariners. The pitching was billed as the strength of this team, but it won't be enough to make up for one of the worst Yankee offenses in franchise history. The Yankees are among the worst of the worst. The teams people laugh at, you just can't always tell at first glance. Brian Cashman should start preparing for next year.