By altering his strategy with two strikes, Ivan Nova has been able to strike more hitters out.

Share All sharing options for: How Ivan Nova became a strikeout pitcher

When Ivan Nova first came up, he was anything but a strikeout pitcher. In 2010 and 2011, he punched out just 14% of the batters he faced, ranking 113th out of the 139 pitchers who threw at least 200 innings during that time. He had gotten by without striking too many guys out in the minors as well, averaging a 16.8% K%. Over the last couple of years though, Ivan Nova's strikeout numbers have steadily increased. His strikeout rates over the last three seasons have been 14%, 21%, and 22% respectively. (League average for AL starting pitchers is 18.6%.)

This trend is a bit unusual considering pitchers tend to post their highest strikeout rates at a very young age. Of course there are exceptions, but generally speaking, the average pitcher's strikeout rate is already on the downswing by the time he enters his sophomore season. This is largely due to drops in velocity, a skill that peaks extremely early.

So what has enabled Nova to buck this trend? For one thing, his velocity hasn't wavered a bit. Most pitchers have to deal with declining velocity from the get go, but Nova is still throwing just as hard as he did when he broke in back in 2010. More substantially though, Nova has altered his two strike approach. In his early days, he often turned to his fastball with two strikes, but has progressively relied more and more on his curveball to punch out hitters. Nova does throw other pitches with two strikes, but these pitches have always accounted for the majority of his two strike offerings. 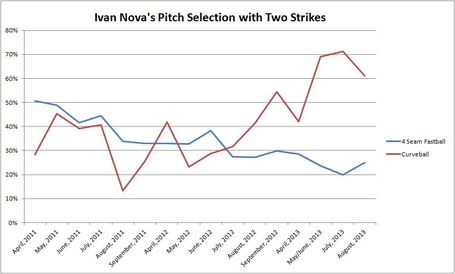 It's not overly surprising that this shift has parlayed into more strikeouts -- Nova's curve has historically induced swings and misses over three times as often as his fastball (4% vs 13% overall; 7% vs 22% with 2 strikes).

Although it has generally worked out well for Nova, feeding hitters a steady diet of curves with two strikes is not an automatic ticket for success. In his last start on Sunday against the Rays, he turned to his curveball in 11 out of 19 two strike counts. This is a teeny-tiny sample-size, but the Rays' hitters did not seem to be overly fooled. His two-strike curveballs got him three strikeouts, but also resulted in a couple of walks and a couple of hits, including a homer by Evan Longoria.

By making adjustments his approach, Ivan Nova has turned himself into a modest strikeout pitcher. At a certain point though, relying too much on the curveball could lead to trouble, as hitters could sit on it with two strikes. But for the time being, his curve seems to have emerged as a solid out pitch and has been a big part of his success this year.