Clear, comprehensive and concise information is all the rave these days. With a WAR performance graph you'll get all the information you'll need to assess players in one quick snapshot.

We, as humanoids, have attention spans that keep getting shorter and shorter. Thanks, Big Bird. If the information we're presented with can't be digested quickly and easily, we'll move on to the next tweet, instagram pic or minute and a half youtube clip without hesitation. Things are no different in the world of baseball and its many, many numbers. WAR has done an excellent job of condensing the value of a given player into a single metric that can be compared easily with any other given player throughout history. But, is there a way to give WAR a little more pizzazz without making it more complicated than it has to be? I'm so glad you asked!

Enter the WAR performance graph. The graph simply has three components; for each player, it plots his offensive WAR component on the x-axis, his defensive WAR component on the y-axis, and his number of games played within the area of the circle being plotted (that is, more games played = larger circle). Below is the graph for Yankees position players so far in 2013. (Data is oWAR, dWAR, and games played for Yankees starters as reported by baseball reference as of 8/23/2013. Click image to enlarge.) 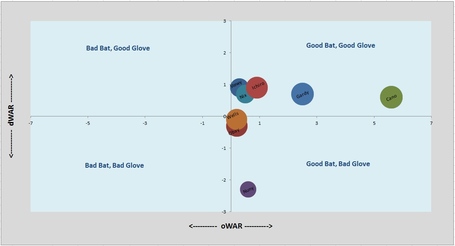 In general, a team wants their players, especially players with the largest circles, falling within the upper-right quadrant of this graph, providing positive value, both offensively and defensively. Players falling in the lower-right quadrant are probably best suited to pinch-hitting or a designated hitter role as they will be weak fielders that can hit. Those in the upper-left quadrant should hopefully be used as defensive replacements or, if starting, at a position where not much offense is expected from them, like shortstop or center field. Anybody falling in the lower-left quadrant should probably not be playing in the major leagues as they are below replacement level in every way (think Enrique Wilson).