Why are the Yankees bunting so much?

The Yankees have done a lot of bunting this season, and more bunting means more headaches for fans like you and I.

Share All sharing options for: Why are the Yankees bunting so much?

Bunts: I don't even know where to start. I believe there is a place, although a very small place, for them in the game, but I'd say the vast majority of them drive me crazy. The Yankees have done a lot of bunting this season for numerous reasons, and, like bunts in general, some are good while most seem to be just plain awful.

Another example of awful bunting we've endured this season. 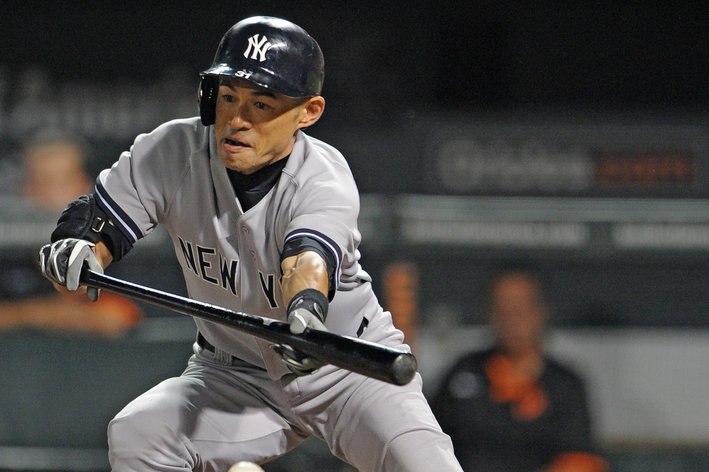 Joe Flynn breaks down why Ichiro's bunt against the Orioles last weekend should be considered the stupidest bunt ever.

Bunting has been a rather large part of the Yankees' game in 2013, at least compared to recent seasons. As a team, they have sac-bunted 22 times this season, good for the second-most in the American League behind the Houston Astros. They also have bunted for 16 base hits, good for second in the AL, too. As we all know, production from the Yankees offense is way down compared to previous years, so they may have to bunt more than usual to manufacture offense, even if it makes me want to vomit.

There have been a number of vomit-inducing bunts executed by the Yankees this season, particularly in their last two games:

Starting off with Friday's game against the Orioles in the ninth inning: Down by a run, David Adams leads off the inning with a single. Brett Gardner, the team's second-best hitter, proceeds to lay down a sac-bunt. Yes, I know Jim Johnson couldn't properly field it, thus Gardner was able to reach base, but bunting in that situation with the purpose of advancing the runner 90 feet is just dumb.

To make matters worse, after Gardner reached, Ichiro Suzuki laid down a sac-bunt of his own. Again, why? For one, Ichiro has been pretty awesome the past month (119 wRC+ the last 30 days, good for second-best on the team), thus he should be swinging away even if the tying and winning runs have already reached. Also, bunting in that spot takes the bat out of Robinson Cano's hands by opening first base and the baton is passed to the cold Travis Hafner and the even colder Vernon Wells. You can argue that Ichiro's bunt was the stupidest of the season.

Fast forward to Saturday's game: The first two batters, Eduardo Nunez and Chris Stewart, who each have 62 and 73 wRC+'s, respectively, reached on singles to lead off the fifth with Baltimore leading by a pair. Brett Gardner was then in a prime position to drive in a run or two after the light-hitting catcher and shortstop reached. But, no. Instead, he dropped down a sac-bunt. This is the second time in as many days Joe Girardi had his second-best hitter lay down a bunt in the middle of a rally. Pretty mind-blowing.

The final bunt I'll be critiquing came in the same game, one inning later. Lyle Overbay led off the inning with a single and the newest Yankee, Luis Cruz, bunted him over to second. No problem, except the bunt came in an 0-2 count. I don't know if Cruz bunting 0-2 was his idea or Girardi's (It seemed like it was the former's, at least that's what it sounded like from listening to the YES telecast), but bunting in that spot after fouling off the first two bunt attempts is very risky, but third time's the charm, I guess.

I'm well aware all of these bunts led to runs and the Yankees won both games, but those four bunts, moreso the first three and especially the second, made my head hurt. Until Alex Rodriguez and Curtis Granderson come back, and/or if the Yankees trade for a power bat(s), we'll probably see more bunts just like these the previous two days, like it or not.

Michael Pineda to stay in Triple-A