Baseball is once again a young man's game. At least that's the current narrative being used to explain an impressive crop of under-aged stars who have burst upon the scene. But, is youth really being served throughout the sport, or are these headline acts misleading? 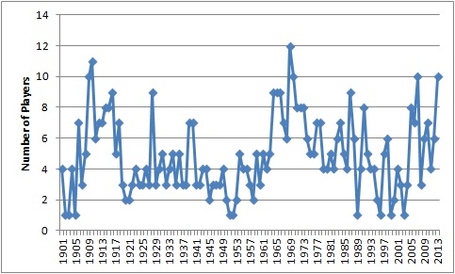 Mike Trout, Bryce Harper, Yasiel Puig, and Manny Machado have become the poster boys for the 2013 season. Each member of the quartet has quickly and spectacularly established himself as a superstar at an age when most players are still working their way up through the minors. However, these likely All Stars are not alone in their youthful brilliance. So far, there are 10 different players age-23 or younger who have posted an OPS+ of at least 120 in 100 plate appearances this season. If that group, which also includes the likes of Nick Franklin, Jean Segura, Giancarlo Stanton, and Freddie Freeman, maintains its performance over the entire year, it would represent the third largest collection of such players in baseball history. Obviously, there's plenty of time to either add or subtract from that list, but the impressive display of talent is undeniable. 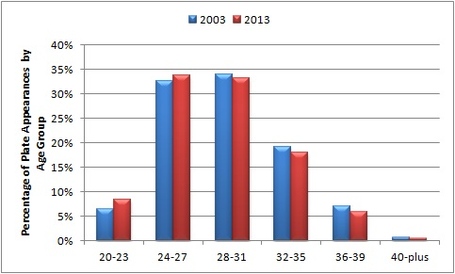 Note: Excludes pitchers without at least 25 PAs as a pinch hitter or position player.
Source: Baseball-reference.com

The injection of youth has been a boon to baseball, but is it representative of a more pervasive trend throughout the game? Compared to 2003 (chosen because it was the first year of PED survey testing), the answer is yes, but perhaps not to the degree implied by the prominence of the best young players. Still, the increase in the number of plate appearances allocated at the younger end of the spectrum as well as the drop in weighted average age of all non-pitchers from 29.2 to 28.8 indicate a gradual shift in the talent pool. 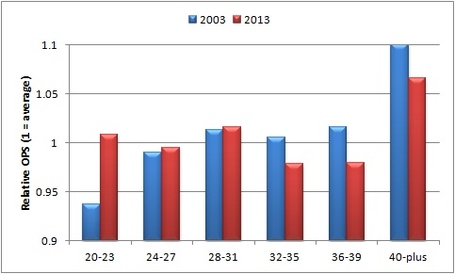 Note: Excludes pitchers without at least 25 PAs as a pinch hitter or position player. For OPS, 1.0 is the baseline.
Source: Baseball-reference.com

Not only have younger players been trusted with a higher percentage of plate appearances compared to 2003, but their relative performance has also been much better. In 2003, players who were age-23 or younger collectively posted an OPS that was only 94% of the overall average, the lowest relative rate among all cohorts. This season, however, the youngest group has been one of the best, trailing only the age-28 to age-31 segment in terms of relative OPS (excluding the relatively small sample of those 40 years or older).

Baseball isn't really in the midst of a youth explosion, but the average major league position player is getting younger, and the average young player is getting better. The reasons for this shift are open to interpretation (PED testing, amphetamine ban, better player development, normal cyclical trends), but if it means more players like Harper, Trout, Puig and Machado, baseball fans will be better off as well.