2013 Yankees: Is this the worst offense in franchise history?

The Yankees offense has been terrible, and it's no secret. But just how bad is it, compared to the franchise's history?

Share All sharing options for: 2013 Yankees: Is this the worst offense in franchise history?

It's no secret that the 2013 Yankees are struggling to put runs across the plate. When guys like Jayson Nix, Vernon Wells, Lyle Overbay, and countless others get hundreds of plate appearances while the majority of the team's punch is on the disabled list, it's to be expected that the offense will struggle. For a period of time, it was very frustrating to watch. Now, however, the pain of watching this lineup hit has been numbed. Expectations are understandably low with Robinson Cano being the only true threat in the lineup. Sure, the offense has woken up the past two days, but it would be unfair to consider those two games anything other than outliers.

Derek Jeter returned yesterday, but one player can't make the difference. Plus, he's 38 and coming off a broken ankle. Alex Rodriguez may be back soon, too. But again, he's no spring chicken, and he's also coming off a serious injury, so expectations should be low. Curtis Granderson will be a huge boost when he returns, but it seems as if his recovery has taken much longer than initially anticipated.

With 366 runs scored in 92 games, the offense is averaging an anaemic 3.98 runs per game, 11th-worst in baseball. Moreover, they're scoring 3.69 runs per game at home, a place where we've grown accustomed to them mashing balls out of the park left and right. Approaching the lower-third of the league in run scoring is something that has been unfathomable in recent years.

There have been some undeniably dark times in this franchise's history. I've been lucky enough to never experience one, being born in 1990. I was obviously too young to experience the dreadful early 90s, but I have heard plenty about it. Some of the other dark ages of Yankees' baseball include the 80s, parts of the 60s and 70s, and before Babe Ruth came over from Boston. So, how does this year's offense stack up against some of those teams?

Using wRC+, we can compare teams and players across many different eras. The statistic is based off Tom Tango's wOBA, which weighs each offensive outcome in proportion to their actual run value (if you're interested, I recommend reading The Book by Tom Tango). However, wOBA isn't great for comparing offenses in different time periods because it isn't park or league adjusted. In simple terms, wRC+ essentially takes wOBA and makes the aforementioned adjustments. wRC+ is also a little more intuitive because it is an index stat, meaning that 100 is perfectly average while a mark of 105 would mean 5% above average. With an 84 wRC+ this season, the Yankees' offense has performed 16% below league average. Because of the adjustments to league (season) and park factors, this stat is excellent for comparison purposes.

Thanks to Fangraphs' easy-to-use leaderboards, we can compare every Yankees' offense since 1901. Amazingly, this is the worst Yankees' offense, per wRC+, since 1914 (82 wRC+)! Furthermore, including the 1914 club, there have only been three worse offenses fielded by the organization since 1901. The other two are the 1913 Yanks and the 1908 Highlanders. Even in some of the franchise's dark ages, the offense was still half-decent based on this metric. Overall, there have only been 29 years the team was below average (that is, below 100 wRC+). 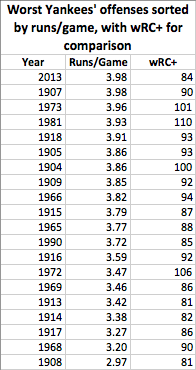 Using wRC+, a case can be made for the 2013 Yankees being the worst offensive club in the franchise's modern times. No matter what statistic you may prefer, there is no denying that this is one of the most lifeless offenses in Yankees' history. Many of us, including me, have never been around for a lineup like this. Of course, the season still has a ways to go. The club hopefully will continue to get healthier, and perhaps made a trade or two. But for now, we're looking at a historically and uncharacteristically terrible Yankees' offense.

Derek Jeter's return: What can we expect from him this season?

Zoilo Almonte: Is he the Z-Pak for what ails the Yankees?