Inconsistent production from the Yankees' hitters kept them out of the playoffs, but the Yankees' record should have been much worse.

Share All sharing options for: The Yankees' 2013 season by month

Although the Yankees managed to stay in playoff contention until the last week of the season, its pretty clear that they were fortunate to even get as close as they did. Day after day, it seemed like their lineup had at least three or four guys who had no business starting in the majors. Every team has its weaknesses, but it’s just hard for a team to be competitive with that many holes. The team's total wins above replacement (WAR) as well as their Pythagorean record both indicate that they got a bit lucky and shouldn’t have even broken 80 wins this year. Looking more closely at wins above replacement, the Yankees ranked 5th in baseball for pitching WAR and 24th in terms of position players. Their pitching staff was more than acceptable, but the offense was downright putrid at times. 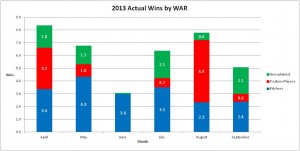 Looking at these totals, a couple of things jump out:

1) The Yankees outperformed their WAR in every month.

2) The production the Yankees received by position players varied greatly from month to month. It was particularly poor in June and particularly great in August.

At least in terms of WAR, the whole consistently proved to be greater than the sum of the parts for the Yankees. They managed to win more often than WAR would predict in every month. This was largely due to their propensity to come through in big spots - the Yankees led the league in "clutch" according to Fangraphs, ranking second and third for pitchers and batters respectively. Clutch is mostly a myth -- its signifies luck rather than a repeatable skill -- so there's no reason to expect the Yankees to keep this up next year. I suppose it's possible that Joe Girardi somehow helped his players succeed in key spots through his in-game decisions and/or ability to motivate, but that's a reach, especially since the Yankees were not "clutch" in recent years. For what its worth, though, the Yankees came through in big spots much more frequently than they did in small spots in 2013.

The inconsistent production from position players was primarily driven by the Yankees' offense, which was all over the map this year. It seems like eons ago now, but back in April, the Yankees were one of the better hitting teams in baseball, driven by Robinson Cano and supplemented by strong performances from Travis Hafner, Vernon Wells, and Francisco Cervelli. It was easy to be optimistic about the bombers' season after the first month. Hafner and Wells were looking like great buy-low moves who still had something left in the tank, and even if their performance were to tail off, there was help on the way in the form of Derek Jeter, Mark Teixeira, Curtis Granderson, and eventually Alex Rodriguez.

Come May, the wheels began to fall of the Yankees' offense, and the reinforcements were taking much longer than expected - April heroes, Hafner and Wells, proved to be flashes in the pan, combining to hit .222/.289/.360 after the calendar turned to May, and Jeter, Teixeira, and Granderson all returned to the DL quickly after returning. Cano continued to dominate and Brett Gardner was solid, but otherwise, the Yankees were laughable on offense through most of the summer.

Things really hit rock bottom in June when the Yanks had easily the worst offense in baseball, hitting just .223/.290/.330. June was a down month for Cano at the plate, but most of the damage was done by Vernon Wells, who was hitting like a pitcher by this point (.133/.143/.147), and scrubs who received far too much playing time - namely, Lyle Overbay, Reid Brignac, and David Adams. Mark Teixeira and Kevin Youkilis were also terrible while trying to play through injuries. To make matters worse, whatever voodoo the Yankees were using to outplay their talent this year apparently wore off for the month of June. The Yankees ended up winning just 11 games over the month, about what WAR says they should have.

Things remained ugly through July before picking up in August when the quartet of Alfonso Soriano, Curtis Granderson, Alex Rodriguez, and Mark Reynolds joined the team and helped make the lineup respectable again. Robinson Cano also had a monster month, hitting .370/.442/.570. Unfortunately, this new-found production tailed off in September thanks to some atrocious hitting from the outfield - the bottom completely fell out on Vernon Wells, Ichiro Suzuki, and Curtis Granderson.

Based on some of the performances that stemmed from certain players receiving far too much playing time, Yankees fans should be glad this season wasn't a complete embarrassment. Still, it hurts to come so close to the playoffs only to fall short, especially when even a decent performance in the early summer could have made the difference. Heading into 2014, we can only hope the Yankees brass is aggressive in retooling the roster. As bad as it was watching a lineup full of holes this year, things could get significantly worse if and when the Yankees' luck runs out.